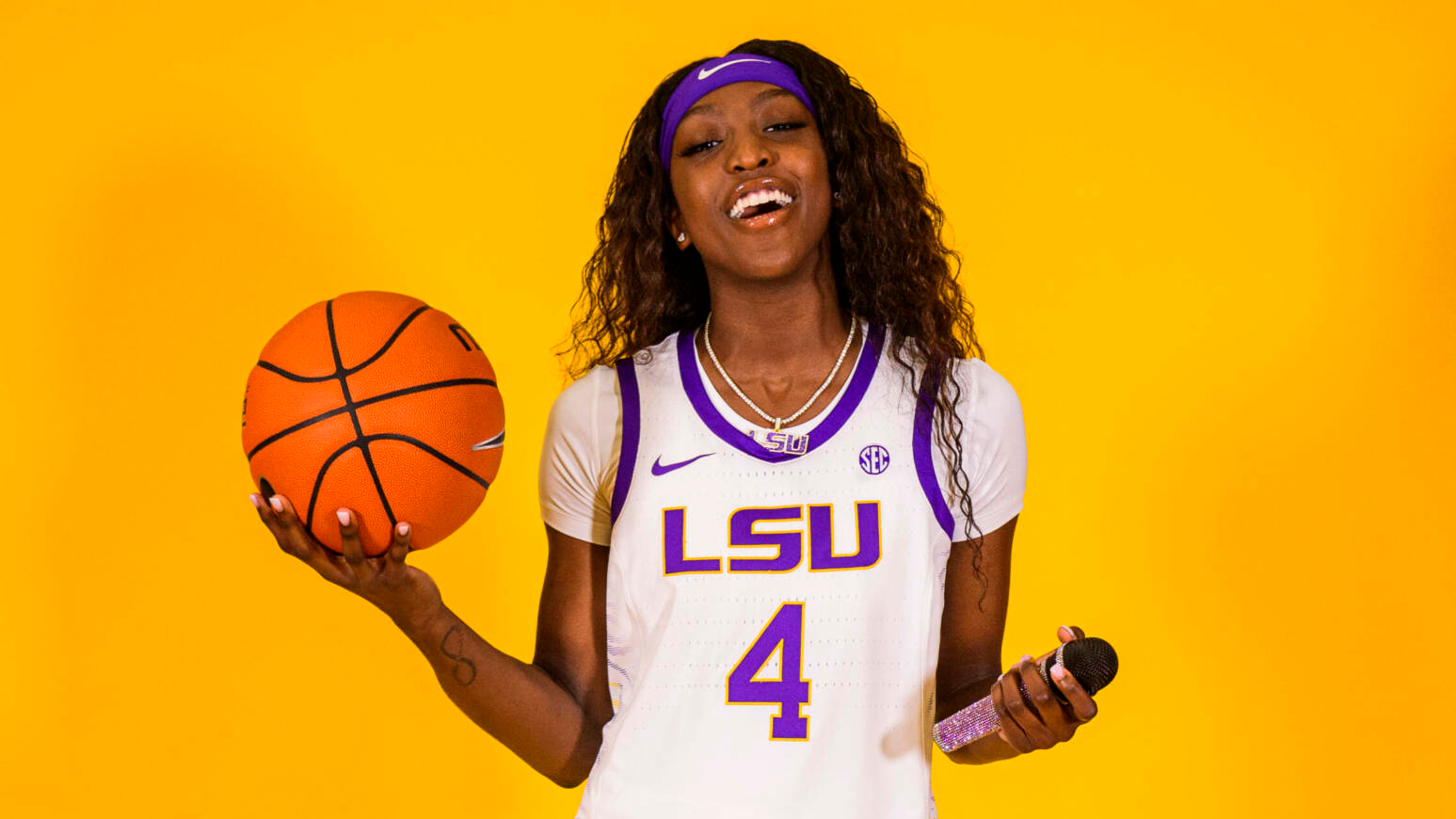 The first LSU jersey Jack Bech remembers owning is his own.

So when he sees fans wearing “Bech 80” on game day – mostly on t-shirts, sometimes on knockoff jerseys – the freshman playmaker from Lafayette can’t help but think, That’s incredible.

The astonishment Bech feels when he sees strangers wearing his jersey is authentic. The jerseys are not.

Not yet, at least.

For decades, the only named and numbered uniforms Tigers have seen their supporters sport during their college careers are unauthorized replicas, a byproduct of the NCAA’s longstanding restrictions on student-athletes’ ability to profit off of their name, image, and likeness (NIL).

Those restrictions are gone for good, and soon, the knockoffs will follow suit, thanks to group licensing, the latest tool empowering student-athletes and powering NILSU at the forefront of collegiate athletics.

LSU’s Group Licensing Agreement with The Brandr Group (TBG), signed this week, opens a new world of opportunities for student-athletes to utilize LSU Athletics’ marks in the NIL space. The partnership allows for licensees or sponsors access to both student-athlete attributes – their NIL, as well as signatures, stats, numbers, biographic data, and any other identifiable features – and LSU’s marks.

Much like professional athletes who opt into their players’ associations, student-athletes who opt into the agreement would receive royalty payments when those licensees and sponsors utilize and monetize their attributes. The agreement allows for athletes to retain their rights and do individual deals on their own, while still providing them with the passive income streams related to group deals.

Popular applications of group licensing in the marketplace include video game franchises like EA Sports’ NCAA Football, which has been dormant since 2013 but could return as soon as July 2023 – this time with players’ names. Group licensing offers an expedient option for both the video game’s creators and the athletes it features.

“Acquiring a large group of athletes’ rights one by one is not effective for any video game maker,” says Celine Mangan, a senior account executive with Altius Sports Partners, LSU’s NIL advisory group. “So they say, ‘Well, if we can do it (through group licensing), then we will actually produce the video game.’

“On the flip side, it makes it easier and accessible for student-athletes to be able to use the marks and utilize their brand as LSU student-athletes in order to gain revenue from the products being sold. It’s a win-win in both scenarios. In both cases, the point of it is to make it easier for both parties that are involved.”

In addition to video games, other potential examples include trading cards, the emerging NFT market, and, of course, jerseys – whether that’s football or soccer, softball or baseball.

Bech never wore the jersey of his favorite Tiger growing up, Tyrann Mathieu, because the only authentic named jerseys for sale were former players he was less familiar with. (Their jerseys, like Joe Burrow’s or Odell Beckham Jr.’s today, were licensed through the NFL Players’ Association.) For him, the thought of fans sporting his jersey – the real deal – is a game-changer.

“I think it’s pretty cool whenever I see people wearing shirts,” Bech says. “A jersey would be that times 10.”

GROUP LICENSING IS just the latest manifestation of LSU’s forward-thinking approach to NIL. Some schools resist change. LSU embraces it, working to find ways to maximize the opportunities it provides.

That approach, established at the very top of LSU’s administration, has trickled down to its coaches. It’s why NIL has become an integral part of the recruiting pitches of coaches like Jay Johnson and Kim Mulkey. Both are just months into their tenures at LSU, but both have already incorporated the NILSU plan – the promotion, the education, and the platform – into their messaging to recruits and their families.

As he was signing the No. 1 recruiting class in the country, Johnson made NIL opportunities a centerpiece of his pitch to the top high school players in the country. NIL’s applications in baseball, an equivalency sport with just 11.7 scholarships to offer and 40 roster spots to fill, could be transformative, providing an additional financial incentive for elite players to choose college over the minors as their preferred path for development.

It’s a path Johnson has always believed in, a message he’s preached to recruits for years. He calls coming to LSU “a 36-month laboratory for improvement” and compares their platform in Baton Rouge to being on the New York Yankees or the San Francisco Giants.

And while he could name “20 other reasons that are more important” as to why players should make a stop in college on their way to the pros, NIL is an additional and critical arrow in that quiver, making college baseball worth the shot – even to those players who could be offered as much as $2 million in signing bonus.

“Some guys (in this class) will turn down that money and come play for us,” Johnson says. “That’s exciting.”

“I think there’s unlimited potential. Some of our players are tapping into that already. I think that’s really exciting. I think that guys on this list are very marketable in terms of their talent, and in terms of their character. So you give them a platform like LSU Baseball, I think the NIL thing becomes very real. And hopefully, that helps a couple of them, gives them another reason not to bypass (college baseball).”

Mulkey, meanwhile, is making similar waves in recruiting with her approach to NIL. She admits she was initially uncertain of NIL’s impact in the collegiate space, much as she didn’t know initially whether to resist or embrace the transfer portal. With both, she opted for the latter approach, with much success.

“Just as the transfer portal is here to stay, you realize (NIL) is going to happen, so you need to embrace it and not let that be held against you in recruiting,” she said this summer.

Instead, Mulkey has transformed an uncertainty into an asset. Take, for example, the signing of Flau’jae Johnson, who is both the No. 26 prospect in the 2022 recruiting class and a rising star in the music industry. When LSU hosted Flau’jae for her official visit in October, they turned her musical interests and the platform she’s built for herself as an artist – she has nearly 1 million followers across social media and has appeared on television series like Rap Game and America’s Got Talent – into a focal point for her recruitment.

They pointed to the rollout of NILSU in Times Square and the consistent virality of the content created in Baton Rouge. They took photos of her on a stage in Tiger Stadium at night with a microphone in one hand and a basketball in the other. They customized a presentation on how pairing her brand with LSU’s could help take her to the next level, on the court and in the studio.

The message behind all of it: We want to tell your story, and we want to help you tell it, too.

On November 11, Flau’Jae announced her commitment to LSU with a video on social media, backed by her latest musical release, “All Falls Down.” And LSU placed a billboard in Atlanta announcing her signing, a microphone prominently placed in the design.

“I knew I needed to choose a school that would allow me to do both and express myself on and off the court. To live out both of my dreams, that’s been my one dream.”

FROM TIMES SQUARE to viral posts, NILSU rolled out this summer with plenty of flash. Behind the scenes, the substance has solidified. Publicization is the window dressing, but education is the foundation of the department’s work in NIL.

LSU’s approach to educating student-athletes has been holistic and comprehensive. In partnership with Altius, they’ve developed and provided educational sessions on topics ranging from branding, group licensing, and intellectual property. They’ve hosted NIL panels with student-athletes and administrators to answer critical questions and customize materials to fit their consumption patterns and interests. They’ve built digital tools like LSUSports.net/NILSU and NILSU Instagram and Twitter accounts, as well as an internal student-athlete and parent portal to answer frequently asked questions and provide further education.

But the education goes beyond lectures and materials. LSU isn’t just educating its student-athletes – it’s empowering them.

Shareef O’Neal has already seen that approach pay dividends. While he arrived in Baton Rouge with a large platform, he’s felt supported to capitalize on it and expand on it. He was men’s basketball’s representative on an NILSU student-athlete panel in January, and it was during that conversation he realized he could not only utilize his NIL – he could maximize it.

“I feel like LSU’s done a really good job of helping their athletes use their potential to their maximum,” he says. “The way I came in, I feel like it’s a big plus that my dad went here to LSU. But I feel like even if it wasn’t, they’ll still push for all their athletes to be the best that they can and get as many deals as they can, so they can all be successful. I feel like LSU is known for having amazing athletes come here, and they work really hard on NIL to make it perfect for all the athletes here.”

His approach has been to partner with brands that reflect his values and priorities. In one deal, he worked with a company on a time-saving platform to facilitate NIL deals around the busy schedules of a student-athlete.

“I want to do stuff NIL-wise that can help other people,” he says. “The system that we were creating is going to help all athletes with NIL, make it way easier on them. Because I know it could be a lot. I did a video one time and it took me a few hours. The sun was going down. I was stressed out. But this thing we’re working on, it’s gonna help people do stuff way faster and way more efficiently.”

The new approach provided by NILSU combines with the department’s longstanding development of student-athlete brands, particularly through media opportunities and promotion.

This is where the story comes full circle. Last fall, during annual media training, O’Neal met Dr. Tommy Karam, the godfather of modern sports marketing as an academic study and the person Shareef’s father, Shaq, credits with helping him at the outset of his own brand building. Dr. Karam has been training LSU’s student-athletes since Shaq first asked him for help with public speaking, and he always starts his presentation with the story of Shaq first approaching him.

After media training, Shareef told Dr. Karam he’d heard that story before – from his father.

“He was like, ‘What?! You’re his son?’” Shareef remembers. “The whole team was laughing. I ended up taking a selfie with him and sending it to my dad, and he replied, ‘That’s the man.’”

Like the school he represents, O’Neal is thinking long-term. And like his peers, he’s learning both from instruction and experience. Cade York was one of the first college football players – and the first specialist – to strike a major NIL deal, and while he had to step outside of his comfort zone to act in a commercial shoot, he views it as a taste of what’s to come when he’s in the NFL.

Better than the laughs are the lessons. York values the educational sessions provided so far, but nothing beats learning from experience. And one thing he’s learned above all else: there’s value in wearing purple and gold.

“The best way LSU has helped us is that we’re tagged along as part of the LSU brand,” York says. “None of us are going to be bigger than LSU itself. To be able to be tagged as a part of that is going to make our brand that much better.

“That’s honestly the best thing to do for us.”