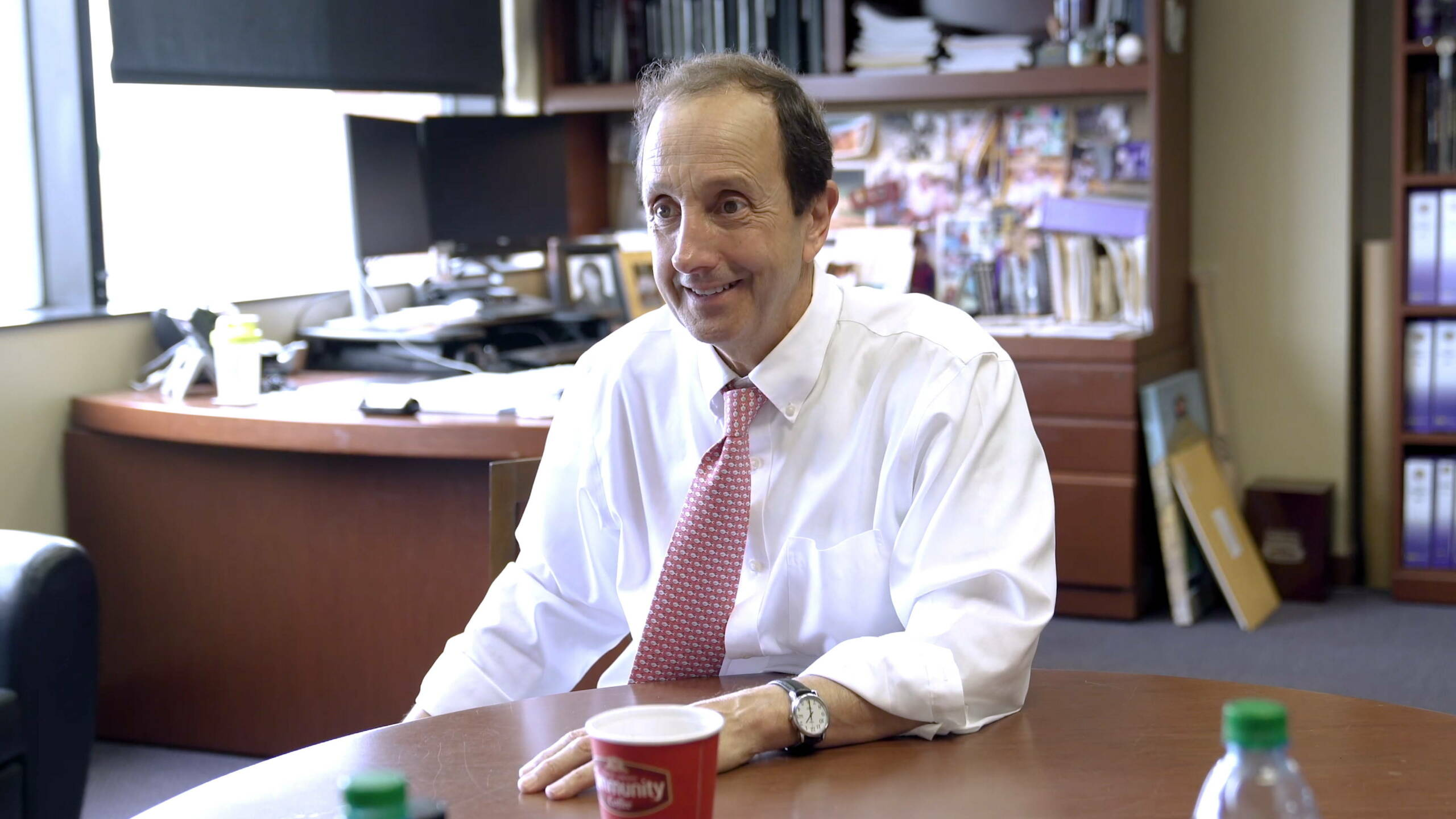 Inside of Dr. Tommy Karam’s office drawer, underneath a desk covered with scribbled-in legal pads and a week’s worth of newspapers, are three DVDs.

So it’s in good company he finds the last one, which he originally kept hidden for 20 years, out of respect to its subject. This is private, personal, Dr. Karam had assumed, until one day, Shaquille O’Neal asked him if he ever used the video of his first media training sessions with Dr. Karam as a teaching example.

“What?” O’Neal shouted. “You have to use those tapes!”

Permission granted – from perhaps the planet’s best-branded athlete, to perhaps its best teacher of athletic branding.

Dr. Karam, a senior instructor in the Department of Marketing of LSU’s E.J. Ourso College of Business who helped create the university’s sports marketing curriculum two decades ago, has also been training Tiger athletes in personal branding and media relations since the 1990s.

That includes athletes from all sports and, most recently, the three Tigers who attended the 2019 SEC Football Kickoff – SEC Media Days, in the common parlance – earlier this week.

It’s all about the brand. Dr. Karam has our guys ready for #SECMD19 pic.twitter.com/KD1RBixai0

It all started with O’Neal, who wandered into Dr. Karam’s office nearly 30 years and hundreds of millions of dollars in income ago with a proposition.

“They tell me you can help me be a better speaker,” Dr. Karam recalls O’Neal saying. “I think I might have a good career, and I want to be ready to speak and interview.”

So they pulled out a camera, and they started recording. Dr. Karam’s previous expertise was in public speaking, so he began working with O’Neal on the basics: speaking from the diaphragm, slowing down during answers, pausing for breaths. As they addressed the fundamentals of oratory rhetoric, Dr. Karam quickly realized O’Neal’s enormous personality had limitless potential, and that his imperfect way of speaking was actually, well, perfect.

“His personality was precious,” Dr. Karam says. “It was beautiful. What I learned from him is that this imperfection is probably the greatest strength you can have in an interview. In other words, just trying to find out who you are, that’s being imperfect.

“Everybody tries to be structured and formal, and it doesn’t work. Shaquille, his speaking isn’t platform speaking, because that’s not what people want. But it’s just so likable.”

While O’Neal went on to develop into a sports marketing monster – worth more today than he ever made as an athlete thanks to his off-court personality and brand – Dr. Karam became a critical part of LSU’s work with student-athletes.

As he developed one of the first sports marketing courses in the country inside the College of Business, he also developed a media training and personal branding program that he’s now been using with Tigers for more than two decades.

“It’s so important to me to not put the words in your mouth,” he says. “I want to let it be them, but to package it in a brand that’s going to captivate reporters and fans and the public. That’s where I think the classic study of rhetoric, to the everyday application of sports marketing, to the end result of the players going out and marketing themselves, selling themselves, representing the university, that’s how it all fits pretty nicely.”

There’s no one-size-fits-all system, Dr. Karam says, although there are some basic, universal truths he emphasizes with each athlete:

That’s part of the framework, but within it, Dr. Karam emphasizes that athletes feel free to be themselves, because that authenticity is likable.

“Most of the athletes are raw, and they’re new at this game, but they want to get better,” Dr. Karam says. “Part of it is they’re just nervous. As good as they are as athletes, they get nervous in interviews.

“The old saying I heard once from a wonderful professor at LSU was, ‘If you’re not nervous at a time like this, you’re not paying attention.’ I think these athletes are walking in, and they’re paying attention. Because they know they’re going to live in this light.”

The results speak for themselves. LSU’s earned its reputation as DBU, but what about TVU? O’Neal (TNT’s “Inside the NBA”) and Booger McFarland (ESPN’s “Monday Night Football”) are two of the highest-profile television commentators in all of sports, while Ryan Clark is well established at ESPN and Marcus Spears is a rising star at the network. All did work with Dr. Karam in college, and he is full of anecdotes featuring some of the many professionals who are currently at the top of their brands in sports.

But it’s not just the superstar athletes or television brands Dr. Karam takes pride in. He wants every student-athlete – every student he teaches, really – to leave knowing the value of developing their personal brand outside of athletics. He calls it “competency vs. warmth.” When the competence of two prospects is equal, warmth of personality usually makes the difference in interviews – with reporters, and with employers.

“If your brand is good, companies will hire you,” he says. “There’s so much value in relationship building and customer service. Every athlete can bring incredible value to companies. Some players want to be in that TV seat. Others just want to be able to go out and do something in the business world, where they can go speak and be great leaders in the community.”

His most recent pupils starred on Monday in Hoover. Quarterback Joe Burrow drew rave headlines for his charm and toughness. Safety Grant Delpit starred as the new No. 7. And center Lloyd Cushenberry declared his desire to one day join the ranks of LSU alums on television.

Dr. Karam worked with each player for hours in the weeks leading up, but he didn’t follow along on Monday. He never does. He doesn’t judge the performance of his athletes based on how the media reacts, even when it’s exceedingly positive.

He simply puts on his reporter’s hat, and he asks them one last question.