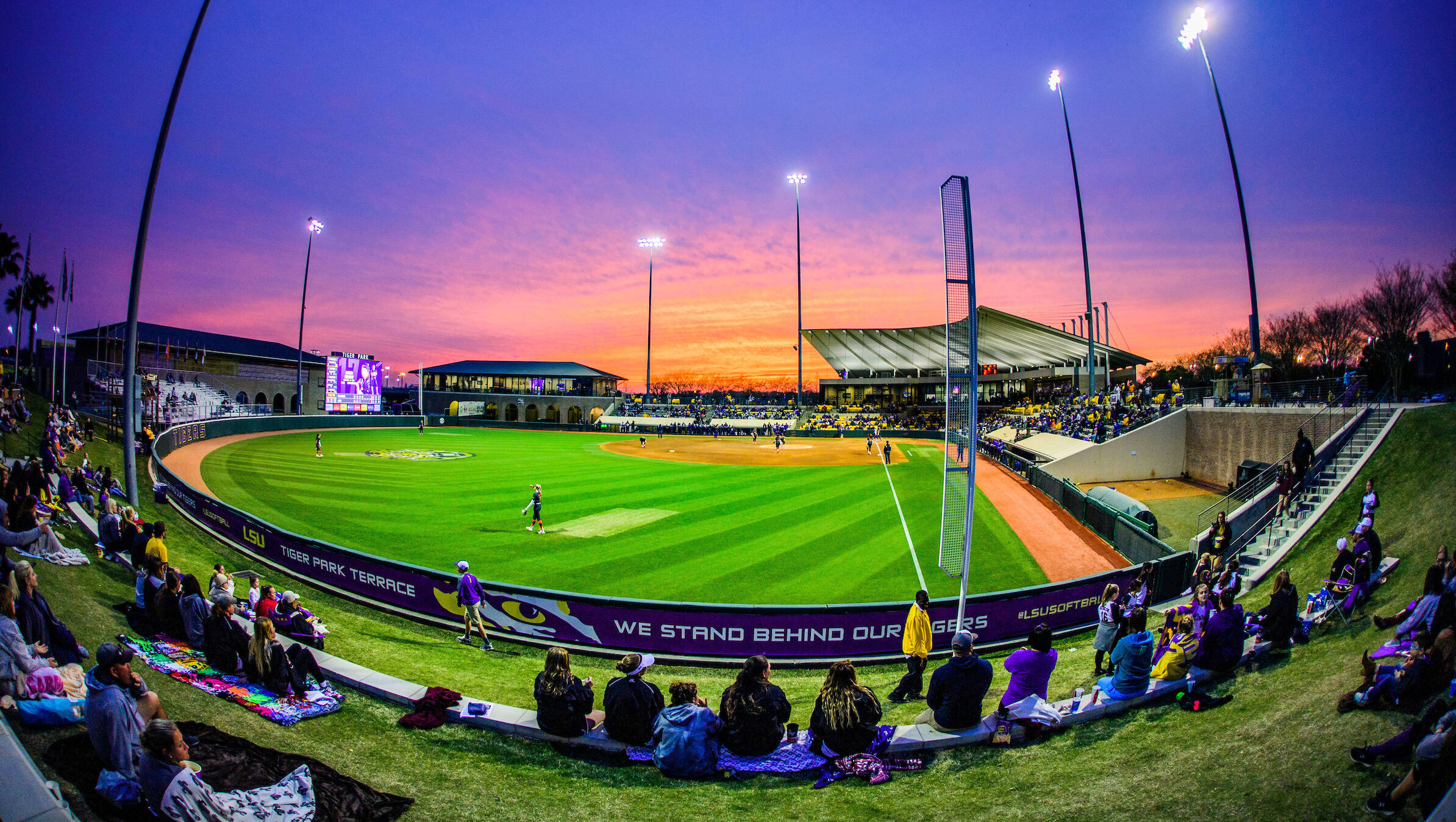 Located on Skip Bertman Drive off the banks of the Mississippi River, Tiger Park is the crown jewel of college softball.

LSU moved into the state-of-the-art facility prior to the 2009 season. The park features 1,289 chair back and bench back seats, a party deck on the third base side and a 30-seat suite above the first base line. There also is seating for 960 additional fans located in the Tiger Terrace. An additional 500 permanent seating was implemented in right-center field prior to the 2019 season.

Also in 2019, a upgraded videoboard was installed and continues to be behind the right-field fence and is a full high definition media board. The board is 655 square feet and has the capabilities to do a full live production with cameras and replay.

On the second level, the hallways featured with plaques honoring LSU’s NFCA All-Americans and All-SEC selections leading into the locker room, team lounge, video theater and coaches offices. The hallway also features a mural dedicated to opening night when 2,172 fans gathered to watch LSU embark on the next chapter of its storied history by christening Tiger Park with a 6-0 victory over McNeese State on February 11.

Prior the first-ever game at the facility, LSU honored its softball past and present as former alumni joined the current team on the field for the ribbon cutting ceremony. Retired head coach Yvette Girouard cut the ribbon and spoke during the dedication along with LSU Vice Chancellor and Director of Athletics Joe Alleva, then-Chancellor Mike Martin and former Athletics Director Skip Bertman.

The field at Tiger Park also received an extensive set of upgrades prior to the 2019 season. The playing surface was stripped and an upgraded drainage and irrigation system was installed throughout the entire field. The outfield will return to a Celebration Bermuda grass surface. These advanced systems and upgrades will greatly enhance the efficiency in which the field returns to a practice or game ready condition.

Among the upgrades, the Mike Moore Softball Performance Center has been added to the facility and is one of the top indoor facilities among college softball and the biggest indoor facility among the SEC with space of 14,500 square feet. The facility was named after Mr. Mike Moore on May 4. During his life, Mr. Moore was an avid and very active fan of LSU Athletics. Mr. Moore and his family were season ticket holders for multiple sports and often traveled across the country to watch the Tigers play. Mr. Moore tragically passed away while traveling with his wife supporting the LSU Softball team in Palm Springs, California in February of 2015. Before his passing, Mr. Moore and his family made a financial commitment to the LSU Softball program for the Performance Center.

The facility has a full sized infield with custom, motorized netting surrounding the entire surface. This allows the team to participate in full infield, hitting, slapping or pitching drills regardless of weather conditions outside.

Each hitting lane has wired electricity which provides the staff and student-athletes the capability to set up multiple batting machines throughout the facility. The facility is also wired for a custom multi-camera system that will provide the student-athletes and staff with a chance to immediately review film during practice.

The building is equipped with 517 square feet of storage space and a 240 square foot locker room area. Lighting is energy efficient with impact-resistant LED fixtures. A custom turf, that mirrors real grass in terms of playability and performance, was installed with LSU branding through the entire indoor.

In October 2010, Tiger Park was rated the fifth-best architecture building by the LSU Faculty Senate Monthly Newsletter. Below is what the newsletter wrote about the park.

“Best seen at night, when its gables and overhang seem to brighten into a shimmering white sails winging through cool ebony skies, the softball stadium shows that LSU can come up with a building that plays to something other than the local taste for plantation imagery and Greco-Roman bric-a-brac. Welling out of a hillock in a way that suggests strong shoulders on the brink of swinging a home run, the softball stadium evidences a modest freshness that brings a smile and popcorn and hot dogs.”

LSU’s Record in the Tiger Park

In 2008, the LSU softball team completed its 12th and final season of play at the original Tiger Park. Built in 1996, the facility opened just prior to the inaugural 1997 season.

The original park was located adjacent to the W. T. “Dub” Robinson Tennis Stadium and the LSU Natatarium on the north end of the athletics complex.

After delays caused by Hurricane Katrina, LSU broke ground on the “new” Tiger Park on Oct. 9, 2007, and officially opened against McNeese State on Feb. 11 to begin the 2009 season. The new facility is located on Skip Bertman Drive adjacent to the Soccer Complex.

The original 1,000-seat facility (seating chart) was home to the LSU softball team since the program was reinstated in 1997.

In just 12 seasons, Tiger Park hosted five NCAA Regional tournaments and became one of the toughest places in the nation for visitors to play.

LSU had an astounding 338-51 (.869) record in the original Tiger Park, including a 140-34 (.805) Southeastern Conference mark. In 2001, the Tigers advanced through the NCAA Regional tournament at Tiger Park to its first berth in the Women’s College World Series.

Tiger Park was also been home to some amazing feats. On May 20, 2000, LSU and Southern Miss battled out 12 scoreless innings in NCAA Regional action before the Tigers plated the game-winner in the 13th.

In 2008, the final season at the original Tiger Park, an average of 866 fans watched as LSU won 25 regular-season home games, the largest average home attendance in LSU Tigers softball history.