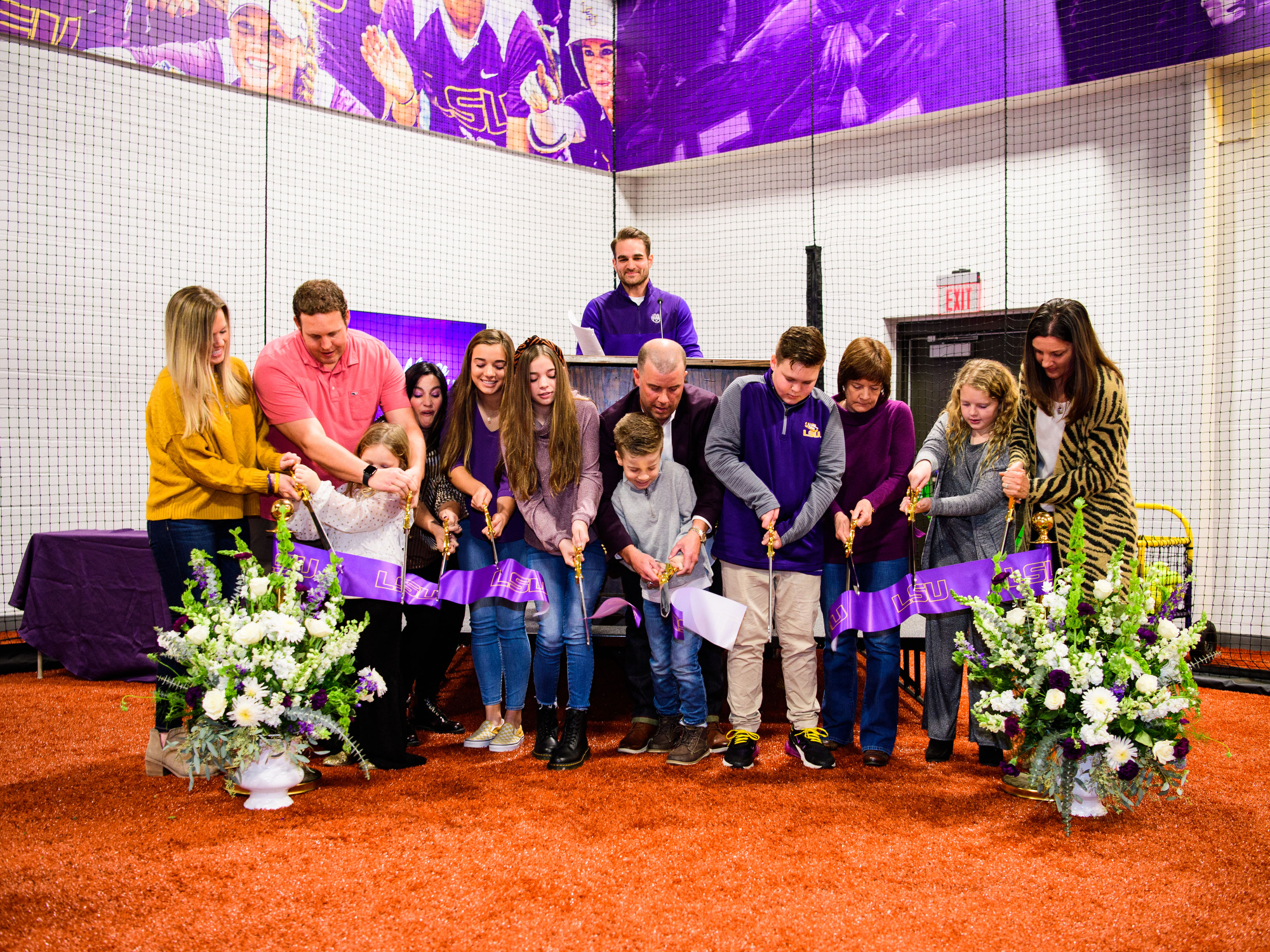 What Mike Moore loved most was making memories.

As a father and a fan, as a businessman and a coach, Moore – who passed away in 2015 while traveling with LSU’s softball team – left a legacy that outlives him today, through his family, his faith, and, of course, his favorite quotes.

“A total commitment to excellence.” “Practice doesn’t make perfect – perfect practice makes perfect.” “The best way to be successful is if nobody cares who gets the credit.”

Like a true coach, Moore’s words stuck with his players for a lifetime. Now, with the opening of the Mike Moore Performance Center – a 14,500 square foot, state-of-the-art indoor practice facility for LSU Softball – his words and his legacy will carry on through new lives and new memories.

The Mike Moore Performance Center is the first of its kind.
It is the ultimate game changer #GeauxTigers pic.twitter.com/ARQFDxxB2X

The first words entrants encounter inside “The Mike” are, of course, Moore’s favorite quote: “Failing to prepare is preparing to fail.”

“It pretty much embodies like my dad,” says Michael Moore Jr. “He did everything with first class. And that’s what this building facility is. It’s done with first class. The attention to detail is extraordinary. It just takes on his personality and the way he operated in life – as a coach, as a businessman, and then as a fan.”

Moore was a lifelong LSU fan – his family still holds the eight Tiger Stadium seats he first purchased in 1977 – and a coach for three decades who fell in love with softball decades ago. When Beth Torina took the helm at LSU, he gravitated toward the program through a series of personal connections and his passion for the sport. Soon, he was skipping Sundays at Alex Box to sit at Tiger Park.

Moore’s favorite part of being an LSU fan was sharing his passion for the Tigers. He brought his children and grandchildren to games. His wife, Monica, was his constant companion, and their love of softball brought the entire family closer together.

“My dad loved memories,” Michelle says. “With the kids and us and the grandkids, he was always thinking, ‘Okay, I’m not going to buy them anything. But I want to build memories with them, and I want to take them places and do things with them because they’re not going to remember the shirt that I bought them, but they’ll remember the times I spent with him.’ He was all about making memories.”

“The Mike” was the Moore family’s effort at making sure his memory continues on through LSU Softball. When he passed away in 2015, he was on the road with the Tigers in Palm Springs, Calif. The night before his passing, he ate dinner with the team and staff. As the team made its run to the 2015 Women’s College World Series, where they would finish third in the finest season in program history, Monica met with TAF officials to see how the family could help LSU Softball continue its progress.

“When he passed away in February, I wanted to do something for him and the softball program,” Monica says. “So we met with TAF, and asked, ‘What can we do to help softball?'”

It Just Means Moore.
The Mike Moore Performance Center was made possible by special individuals who were honored tonight. #GeauxTigers pic.twitter.com/pgBSsGaFMW

Mike and his family had talked about contributing to the program, particularly for the practice facility. But he never imagined having his name on it.

“He simply wanted to facilitate their success,” Michael says. “It wasn’t about him. Never was. It was about the experiences of the people around him.”

Nearly five years later, his vision is a reality. Among “The Mike’s” features: a full-sized infield with custom, motorized netting that drops into hitting or pitching lanes; a custom multi-camera system for immediate, post-workout film review; a 240 square foot locker room area; a weight room and cardio loft; custom turf which mirrors the playability of real grass; and high-tech lighting and graphics that illuminate the history of LSU Softball.

“It was emotional,” Michelle says of walking into the building for the first time. “I just know my dad would be so proud. His personality was big. And seeing this building, I felt like it brought his personality out. It’s way bigger than what I expected, and it’s absolutely amazing. That’s how he was he was: go big or go home. He wanted the best when he did things.”

Across the country, there’s no comparison. “The Mike” is the finest indoor practice facility in college softball. It’s a refuge from bad weather, a training center for building strength and endurance, a center for perfecting skills and preparing for success.

“That just embodies what this facility is: preparing to go out on the field and perform to the top notch standard that softball and LSU is accustomed to,” Michael says.

It’s also a standard-raiser for Torina’s program, and one she is confident her players have earned the right to call home.

“Our players are not entitled, they’re earning this,” Torina says. “They’re winning 45 games per year, five straight super regionals, perfect graduation rate and setting record numbers in community service. They’re working very hard to earn the right to be in the facility.”

Monica spent much of last week’s ribbon-cutting fighting tears, but she must’ve remembered Mike’s words when a smile came across her face and a memory flashed in her eyes.

“What am I expecting from it?” she says, a laugh on the verge of interrupting her tears. “A championship.”

The day finished with more smiles inside “The Mike,” a fitting tribute to its namesake.

“I find myself just wandering around here smiling,” Torina says. “Because of how amazing this is and what this facility truly represents. We have done something to set the bar in our sport and for women. We are raising the bar here at LSU.”

Nothing mattered more to Mike Moore than memories. That’s why his name lives on inside a building built to realize dreams, and it’s why his legacy will never be forgotten.