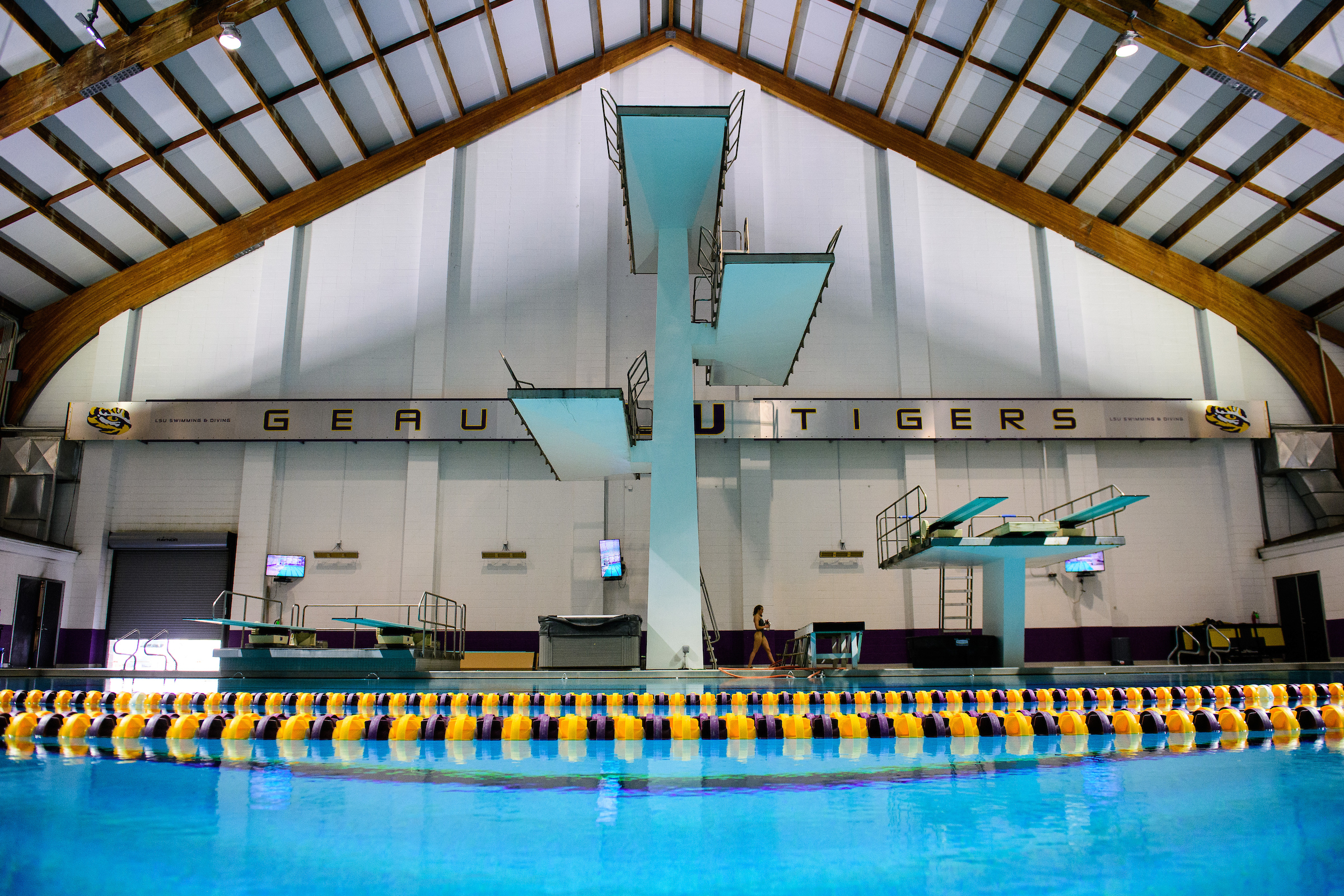 Opened in the summer of 1985, the LSU Natatorium has served as the exclusive home of the swimming and diving teams for the past 36 seasons.

The complex features a 50-meter pool, which can be converted into two 25-meter or 25-yard pools with the use of bulkheads. Furthermore, the facility houses a championship diving well, which was completely renovated in the summer of 2003 with one-meter and three-meter springboards surrounding five-, seven- and 10-meter platforms.

The programs added new graphics and signage throughout the venue in the fall of 2011 and upgraded the scoring system in the fall of 2008, unveiling a pair of state-of-the-art videoboards. Refurbished locker rooms were also completed in September 1998. The spacious locker rooms feature separate varsity lockers, both for men and women, and include public showers and locker areas.

The facility has played host to several national competitions, including the 1985 National Sports Festival, the 1986 Men’s Southeastern Conference Championships, the 1987 NCAA Diving Regional, and the U.S. Diving National Championships in the spring of 1987. The Natatorium was also the host facility during the 1999 NCAA Regional Diving Championships.

During the 2020-21 season, two current divers qualified for the 2020 Tokyo Olympics in Japan. Juan Celaya-Hernandez represented his native country Mexico, while Anne Tuxen represented Norway as the first female diver since the 1988 Seoul Olympics.

In the midst of the postseason, Celaya-Hernandez collected two additional All-America honors after earning the bronze on the one-meter and three-meter springboard. He also earned an honorable mention on the platform diving event due to his fifth-place performance.

LSU returns Celaya-Hernandez and Tuxen to the 2021-22 squad along with fellow Olympian Brooks Curry to provide contributions to the leadership-laden team. The Tigers had their highest finish in the NCAA Championships since 2003, placing 18th in the country.

The landmark is located immediately north of the LSU Field House and can comfortably accommodate 2,200 spectators. Admission to all LSU swimming and diving meets is free.

Paramount to the success of the “student” half of the term student-athlete is providing LSU athletes with the best possible resources to excel in the classroom. For more than 20 years, the LSU Academic Center for Student-Athletes has helped to build well-rounded student-athletes. But as times change and technology advances, the need for further improvements still exists.

As a result, the Cox Communications Academic Center for Student-Athletes opened its doors in November of 2002. A $15 million renovation to the Gym Armory not only made it among the nation’s premier centers, but put it at the forefront. Improvements to the existing center give LSU student-athletes the best opportunity for success by providing access to the latest technology, as well as an array of expanded services.

The improvements to the Gym Armory not only benefit the Cox Communications Academic Center for Student-Athletes, but the entire University as well. The old gymnasium was transformed into a 1,000-seat auditorium the University will use for daily classes, presentations, lectures by distinguished University guests and other special academic events.

The 1,000-seat auditorium is used through the year as a classroom and lecture hall. Each seat in the auditorium has space for a laptop and a modem hookup, providing each student unlimited learning opportunities. The auditorium also contains a movie theatre size screen to aid professors with lectures and classroom activities.

The library provides a perfect setting for individual study, or with a tutor as group.

Included in the 54,000 square feet of the Academic Center are individual study areas as well as 14 private computer rooms for student-athletes to work one-on-one with tutors or by themselves.

Throughout the Academic Center are 75 computer stations, providing student-athletes with a quiet working environment for research, writing and studying.

Critical to the development of an athlete as a student is an adequate academic facility and capable staff to further the athlete’s progress. The Cox Communications Academic Center for Student-Athletes is responsible for overseeing the educational development and progress toward graduation for all student-athletes. The staff acts as a liaison between the student-athlete and the academic communities and insures that student-athletes comply with academic rules established by the University, NCAA and Southeastern Conference. The staff also coordinates academic programs designed to assist student-athletes in acquiring a quality education.

The Goal: For each student-athlete to reach and receive the highest-quality education and degree.

The LSU strength and conditioning facility, located in Tiger Stadium, was built in 1997 and features the latest in both strength training and cardiovascular training equipment.

LSU boasts the largest and most complete athletic training facility in all of collegiate athletics. Focused on aggressive rehabilitation, the Broussard Center for Athletic Training is furnished with the latest in technology and equipment. Some of the features of the 23,000-square-foot facility include an on-site x-ray room, an in-house pharmacy, as well as state of the art hydrotherapy pools. The Broussard Center for Athletic Training is equipped with the largest hydrotherapy pools in both collegiate and professional sports and is one of the few collegiate training centers with a full-service pharmacy, as well as an on-site x-ray room. LSU is also the only school in college athletics with a training room equipped with a full-service vision center. The facility is named in honor of legendary trainer Dr. Martin J. Broussard, who served as LSU’s athletic trainer for several decades.