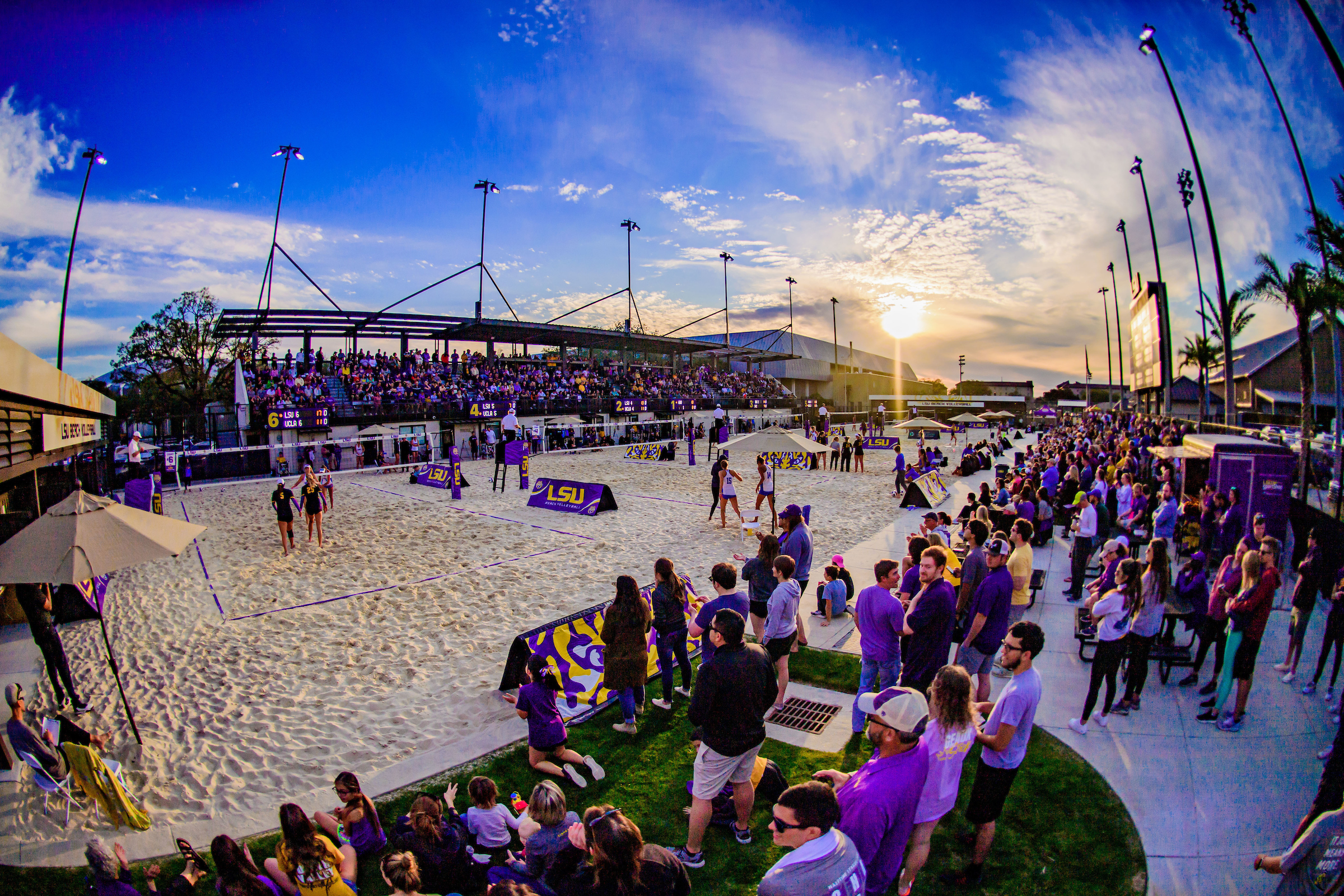 Collegiate Beach Volleyball’s premiere venue was unveiled to the media on Jan. 14, 2019, in the heart of LSU’s campus.

The revitalization of the previous tennis facility, originally built in 1970, will give the Tigers every opportunity they need to continue growing to new heights. For the past two seasons LSU has finished as a top-eight team, earning the opportunity to compete for the national championship at Gulf Shores. The Tigers have appeared in the AVCA Top-10 for 24 consecutive weeks, dating back to 2017.

“This new stadium gives us the opportunity to be better than we could have been without it,” said LSU head coach Russell Brock. “That’s the advantage that we have now. We can push towards our potential. We have an unbelievable place to continue to train.”

The new stadium features six competition courts with 24-inch deep sand. After working with a sand consultant, LSU found a sand pit just 45 miles from campus that matched perfectly for the composition it was looking for. The courts are state-of-the-art in sand permeability subsurface drainage and sand quality with a smooth sand to concrete transition. They feature an underground irrigation and wetting system that will facilitate competition play during hot days, cooling the sand for comfortable play.

Dating back to the program’s first season in 2014, the Tiger’s played their home matches at Mango’s Beach Club in Baton Rouge. Over the past two seasons LSU went 20-1 at Mango’s, including a 14-match win streak in 2018. Moving to an on-campus venue will allow the Tigers to continue to flourish at home.

Moving on campus will make it easier than ever for LSU students and fans alike to experience the newest NCAA sanctioned sport.

LSU is looking forward to being able to host its competition on the LSU campus as the LSU Beach Volleyball Stadium has raised the bar in amenities by providing eight covered team pavilions, a visitor’s locker room and shower facilities.

The facility also features energy efficient LED lighting, a customized home locker room for the Tigers, a state-of-the-art training room for immediate medical attention and a team lounge with smart TVs that can be used for film study and entertainment purposes.

There will be a final seating capacity of 450 with options in the grand stand and in the grass. New scoreboards on both sides of the courts will allow for fans to easily keep track of the score no matter where they are sitting while enjoying the energetic atmosphere of beach volleyball with a brand new sound system.

It feels great to be home in the heart of campus 💜💛 pic.twitter.com/jCql0jrMFY