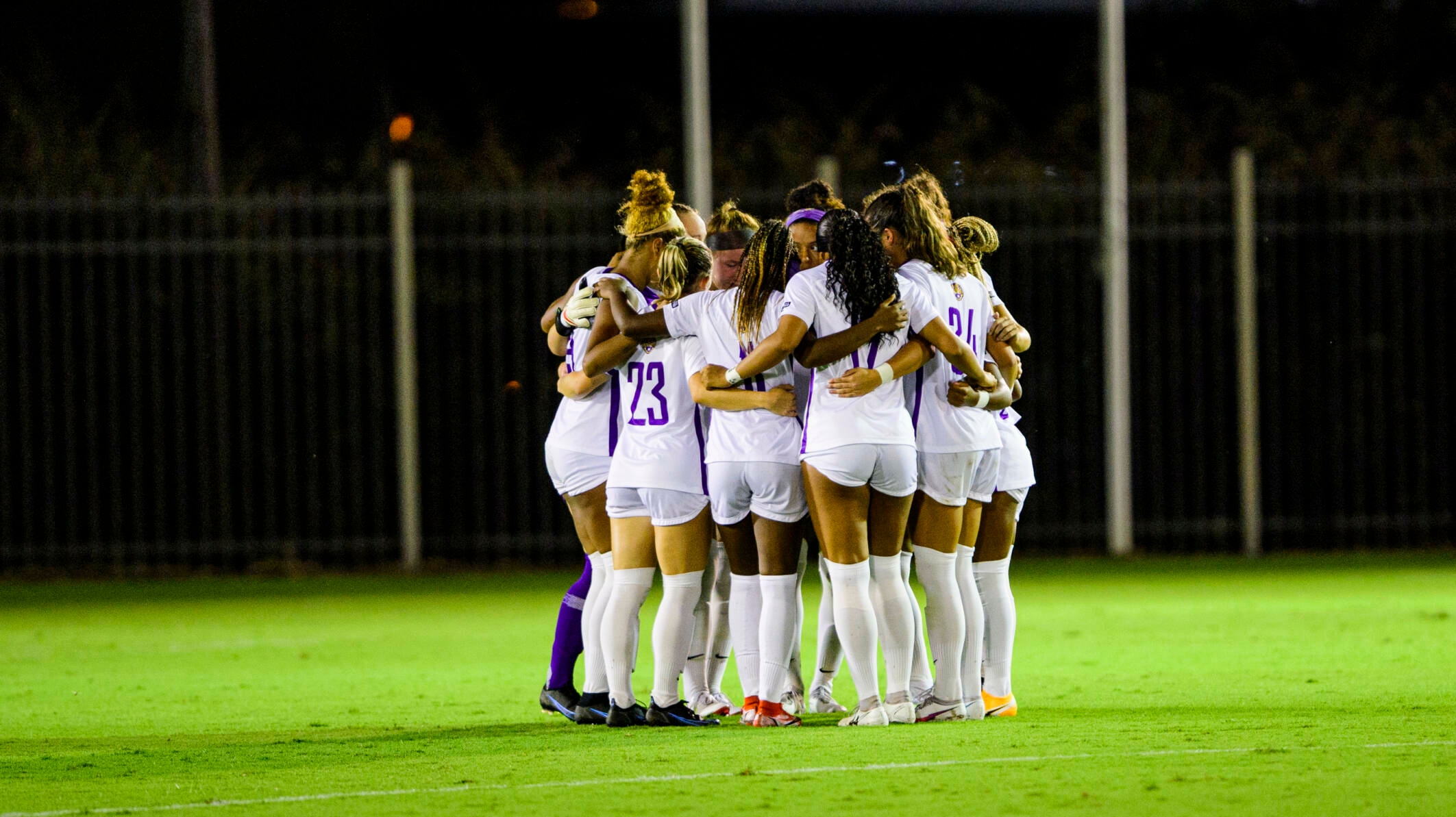 The idea of doing anything you put your mind to is a sentiment you’ve likely heard from one of your grade-school teachers. Usually, it takes more than sheer determination to be successful at anything, never mind one of the best. It takes perseverance, a meticulous work ethic, and a willingness to leave your comfort zone and be a part of something bigger than yourself.

The 2021 LSU Soccer team has all of that in abundance.

It’s the power of passion. It’s what can unite athletes from all over the world to play soccer in Louisiana. It can drive a program out of the basement of the Southeastern Conference and catapult them to the forefront in a matter of games. It can galvanize a team to win three top-25 matches on the road while a hurricane hits devastatingly close to home.

This Friday, September 17, the LSU soccer team will host Mississippi State in the first conference showdown of the season. This time last year, they were preparing for their first game of the season, another conference battle with Arkansas. The COVID-19 pandemic restricted both the Tigers’ 2020 spring training—their first under head coach Sian Hudson—and the normal slate of non-conference games that precede the conference schedule.

Since that point last year, the Tigers have a record of 15-8-3, are ranked No. 6 in the country this season, and find themselves in the midst of a ten-game winning streak dating back to the spring of 2020. That is the longest streak in school history and the longest current winning streak of any team in the country. Hudson’s .634 win percentage is the highest of any coach in LSU’s 27 years of soccer.

During the 2021 season, the Tigers have done a little of everything on the pitch… except lose. They have scored eight in a game, kept four clean sheets, and scored game-winners in the last minutes (and seconds) of games. They are clicking on all cylinders, and the incredibly quick turnaround of the program has been talked about nationally for weeks.

But what exactly propelled this team to these unprecedented heights? How has the team that won none of their games before the 2020 SEC Tournament entered this year’s conference slate as the top-ranked program in the SEC?

In 2020, the Tigers showed flashes of a team that could compete in the gauntlet of the SEC despite their inability to turn it into results. Of their six conference losses in the fall, four were decided by one goal, and their 2-0 defeats were to Sweet 16 finalists Arkansas and SEC champions Vanderbilt. The on-field product was appealing to watch, but they often lacked consistent finishing or the incisive pass that would create a chance to score.

The SEC Tournament brought the framework of success that Sian Hudson’s team would build upon. Two upset wins over Alabama and No. 14 Ole Miss sent them into the quarterfinals, and perhaps more importantly, instilled a confidence in the girls and their style of play that has yet to evade them.

Golden goal by @tinayaalexande3 on Nov. 15, 2020, for our first ranked win under @LSUCoachSian against No. 14 Ole Miss at the SEC Tournament!

Looking forward to more moments like this in the months ahead.#GeauxTigers pic.twitter.com/lmuSp19V6D

The spring schedule saw the Tigers win six out of eight games, including the final three to raise the bar even higher for the upcoming fall season.

Enter Sian Hudson’s first true recruiting class. Her time at the University of Colorado at Colorado Springs helped her lure talent from around the country, and the 2021 recruiting class was comprised of four freshman and eight transfers, headlined by Colorado natives Alesia Garcia and Athena Kuehn.

Whatever pieces were missing from last year’s attack, Garcia and Kuehn have fit the mold thus far. Garcia, a transfer from the University of New Mexico, has five goals and two assists to start the year, including three goals and an assist on Aug. 22 against Sam Houston. Add her goal-scoring ability to a rotation of experienced forwards in Taylor Dobles, Meghan Johnson, All-SEC Second Teamer Rammie Noel, and reigning SEC Offensive Player of the Week Molly Thompson, and you get a culture that is both fiercely competitive and fun to be around.

“There are many different personalities within the team, and they just click together to make one big family,” Garcia told LSU’s Alyssa Leal. “It’s really fun to be a part of.”

Athena Kuehn, previously a defender at the University of Minnesota, has found an immediate spot in the Tigers’ starting eleven as an attacking midfielder and has adjusted to the change well, having logged three goals and two assists.

“I was reserved in my thinking [at Minnesota] so being here has been a lot different,” Kuehn said after scoring in an exhibition versus Southeastern. “We have some really dangerous people. Just being around that all the time automatically sets up an environment for me to be ready to go.”

Dangerous might be a bit of an understatement. Not mentioned yet is Senior forward Tinaya Alexander, whose 15 points are tied for 21st in the nation and 19 career assists are tied for fourth in LSU history. While Garcia was netting a hat-trick against Sam Houston, Tinaya bested her new teammate with four goals and an assist, the first LSU duo to record a hat-trick in the same game.

Match highlights from today's 8-0 win over Sam Houston State! It's the most goals we've scored in a game since 2010.#GeauxTigers pic.twitter.com/zcfxxqVqvb

Before the 2020 season, Sian Hudson explained her vision of not only what she wants to see from the Tigers that year, but in the years to come.

“I want to move the ball through our lines and play to feet. I want to play an attacking brand of soccer and press high up the field and get a lot of players into the attack,” Hudson told Digital Media Reporter Cody Worsham.

Calling the style of this 2021 team “attacking,” is a modest assumption. In 2020, it took LSU all 19 games to hit 21 total goals. This year, they did at six and currently have 26 goals through seven matches.

The high press Hudson wished to execute has come to fruition throughout the beginning of the season. At least three goals have come directly from the Tigers winning the ball in the attacking third, including Maddie Moreau’s 90th-minute winner against No.15 USF.

Maddie Moreau scores the gamewinner with 30 seconds left and Rammie Noel picks up her second assist of the match!!!!!#GeauxTigers pic.twitter.com/vWrqWxnRqD

“Everyone wants to score goals,” Athena Kuehn said. While the idea sounds nice, scoring goals is the hardest thing to do in soccer, and is usually reserved for those with elite game awareness, proactive positioning, and of course, clinical finishing ability.

LSU has more players that meet the criteria than most. If Coach Hudson and her staff wanted diversity in their goal scorers, they would likely be pleased with the fact that eleven different Tigers have put the ball in the back of the net in the first seven games.

The creativity in attack, however, would not be attainable without the solidity in the midfield and defense. After experimenting with different defensive systems last year, Hudson opts with a three centerback formation that is loaded with experience. First-choice options Shannon Cooke, Maya Gordon, and Reese Moffatt have played a combined 161 games and 12,456 minutes for the Tigers.

They’re smart, quick on their feet, and love to carry the ball forward to get attacks started. Add the composure of defender-turned-midfielder Chiara Ritchie-Williams, whose 81 starts is good for seventh all-time, and the subtle flair of Wasila Diwura-Soale, who was recently called up to the Ghana Senior National Team, and it’s no surprise that LSU has an average possession of 56% and only allow 4.8 shots on target per game (the attack averages 10).

It would not be a story on LSU Soccer without returning goalkeeper Mollee Swift, who has already garnered national awards this season. Her .84 Goals Against Average since she arrived in 2020 would land her fifth all-time among LSU’s former keepers.

As successful and historically significant as this start to the season has been, they know the job is just starting. The competitiveness of the SEC will make or break any team’s season. But with a team that is playing coherently and confidently, there is no telling how high their ceiling can be. History beckons this LSU Soccer team. And they beckon you for support. Friday night, September 17, at LSU Soccer Stadium at 7 p.m. If recent history is any indication, the forecast indicates a high chance for plenty of goals, exciting soccer, and an LSU victory.