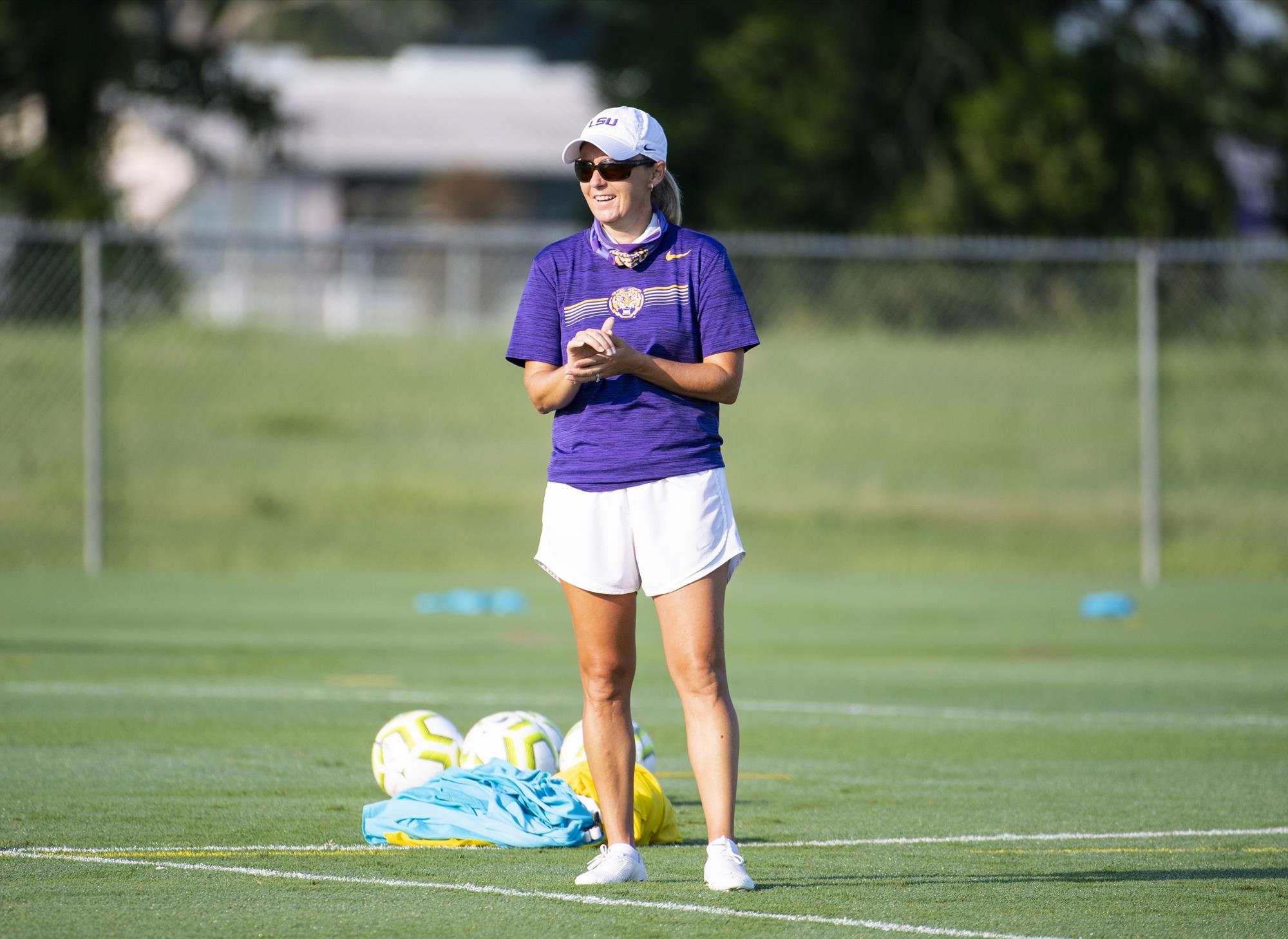 In soccer, vision makes all the difference. The ability to clearly see both what is available in the current moment and what is possible in the next is what separates the elite from the pedestrian.

Sian Hudson, set to begin her first season as the head coach of LSU Soccer when the Tigers kick off the season Saturday at Arkansas, has never lacked for vision. Whether pioneering the sport for women in Wales or turning around college programs as a coach, Hudson has always seen both the predicaments of the present and the possibilities of the future.

“I think it was just time for a new challenge and a challenge at a higher level,” Hudson says. “Obviously, there’s nothing bigger than being able to come to LSU and work in the SEC and lead a program that has such a rich tradition and such a passionate sporting environment as we have here in Baton Rouge.”

Pre-season 2020• With hard work, winning mentality, and ability to overcome adversity, LSU Women’s Soccer is ready for whatever 2020 throws at us #geauxtigers pic.twitter.com/3sKfcgRA8C

Hudson’s journey in the sport spans decades and continents. She grew up playing on boys’ teams in Newport, Wales, until she turned 12 and could no longer legally play coed. That’s when she begged her mother to start a team for girls, printing flyers, finding like-minded competitors, and blazing a trail for women’s soccer in the country.

“My mom was one of the pioneers for soccer in Wales,” Hudson says. “We did sort of set a new path for girls soccer in the UK and in Wales, in particular. I look at that now in my career and what I’m trying to do here at LSU, and I think I lean a lot on some of those moments from 25 years ago and say, ‘How can I take those lessons that I learned and pass those along to my players and the coaching staff that I work with?'”

Prior to LSU, Hudson led the University of Colorado at Colorado Springs to a 52-10-4 record in three seasons, turning a team that had won just three games the season prior to her arrival into a Final Four appearance her first season on the job. Leaving a successful program wasn’t easy, but the passion of LSU’s fans and the prestige of coaching in the SEC were a huge draw.

“Coming from the UK, I grew up in that kind of culture,” Hudson says. “And while I loved my time in Colorado, I did miss that passion, that fanatic fanbase, that sporting environment that we have here in Louisiana and at LSU, in particular. I’m excited to be around that. I think it’s brought me back a little bit more to my roots from back home.”

Just 10 days until our first season game. Time to grind it out #geauxtigers ???? pic.twitter.com/tjWgXJ4ztq

Hudson’s early goals at LSU are less about immediate success and more about building sustainable success. The foundation she hopes to establish is multi-faceted and takes time to instill, but it’s one that hasn’t failed her yet.

A primary component is physical preparation. COVID-19 cut short the team’s spring preparations, but there’s been plenty of film study, and one thing that stood out to Hudson from last year’s Tiger squad was a need for better conditioning.

To play Hudson’s style of soccer, they’ll need it. Watching the rest of the SEC, Hudson sees a league that plays a direct, transitional style, prioritizing athleticism over tactical and technical proclivity. It’s an approach that left the Tigers’ lines stretched last season, with large gaps between attack, midfield, and defense. Hudson envisions a team that relies on a fluid, possession-based approach, staying more compact without the ball and playing more creatively with it.

“I think just my roots and where I come from, I want to play the game on the ground,” Hudson says. “I want to move the ball through our lines and play to feet. I want to play an attacking brand of soccer and press high up the field and get a lot of players into the attack.

“Last year we struggled to score goals, and I think that can be demoralizing at times as a player, knowing that if you concede one, how are we going to win? It’s going to take time, obviously, but just looking at the transition in our style, we’re creating more chances, we’re scoring more goals, we’re getting more players into the attacking third.”

Hudson also wants to breed confidence into a team that features either players entirely new to the SEC or those who struggled last year, when the Tigers finished just 3-12-3 overall. Despite their struggles, Hudson saw talent in the squad, and she hopes to give them the tools to express themselves on the field.

In the attack, she’ll lean on the creative talents of redshirt junior Tinaya Alexander. Alexander is a product of the Arsenal Ladies youth system who scored three goals and provided seven assists as a freshman. She missed most of 2019 with an injury, but Hudson says she’s healthy and confident heading into 2020.

“Tinaya Alexander is somebody that is very special in the attacking third,” Hudson says. “She’s going to be somebody that leads the line for us this year, not only with her ability on the ball, but just her desire and hunger for the game. She absolutely lives and breathes for soccer, and I think she’s somebody that’s going to excite people every time she gets the ball in one-v-one situations.”

Senior Chiara Ritchie-Williams, an All-SEC anchor in LSU’s defense for the last three seasons, steps into midfield this year and also serves as the team’s captain. Hudson hopes she’ll “pull the strings for us in the middle of the field.” Ritchie-Williams will feature alongside fellow Arsenal alum Shannon Cooke –  who scored a wondergoal during the 2018 SEC Tournament championship game – and transfer Wasila Diwura-Soale, a junior transfer and member of Ghana’s U-20 World Cup team whom Hudson calls “very composed and skilled on the ball.” Add in sophomore defender Maya Gordon and local products like Meghan Johnson, Rammie Noel, and Maddie Moreau, and Hudson sees a strong core to build around.

Chiara talks about her most recent goal in our Purple vs. Gold game.#GeauxTigers pic.twitter.com/jYZjVCRUFU

“It’ll be interesting to see who steps up and takes the team by the scruff of the neck, so to speak, and gets into competition and dictates how we play,” Hudson says.

Turning a program around is difficult enough. Throw in a pandemic and a schedule of just eight games – all against SEC foes – and the task only grows taller. The Tigers start the season on the road against Arkansas, the defending SEC champions.

“It is a situation, quite frankly, for us that I’m excited about,” Hudson says. “I think we’ve got nothing to lose, right? Nobody expects us to go there, to a team that has had incredible success for the past few years, and get anything out of it. The way that I’m pitching it to the players is the pressure is on [Arkansas]. They’re expected to win, and we’re expected to go there obviously and compete and show who we are as a new program.

“For us, the performance this weekend is much more important than the result, because I think that going out there and showing who we are as a new program, new team, new identity, and just getting the girls off on a good note is really important.”

It’s the start of a journey to get LSU Soccer back to where Hudson believes it should be, and the road ahead is neither short nor smooth. But those are the roads Hudson knows best.

She sees what LSU Soccer can be. And her vision hasn’t failed her yet.