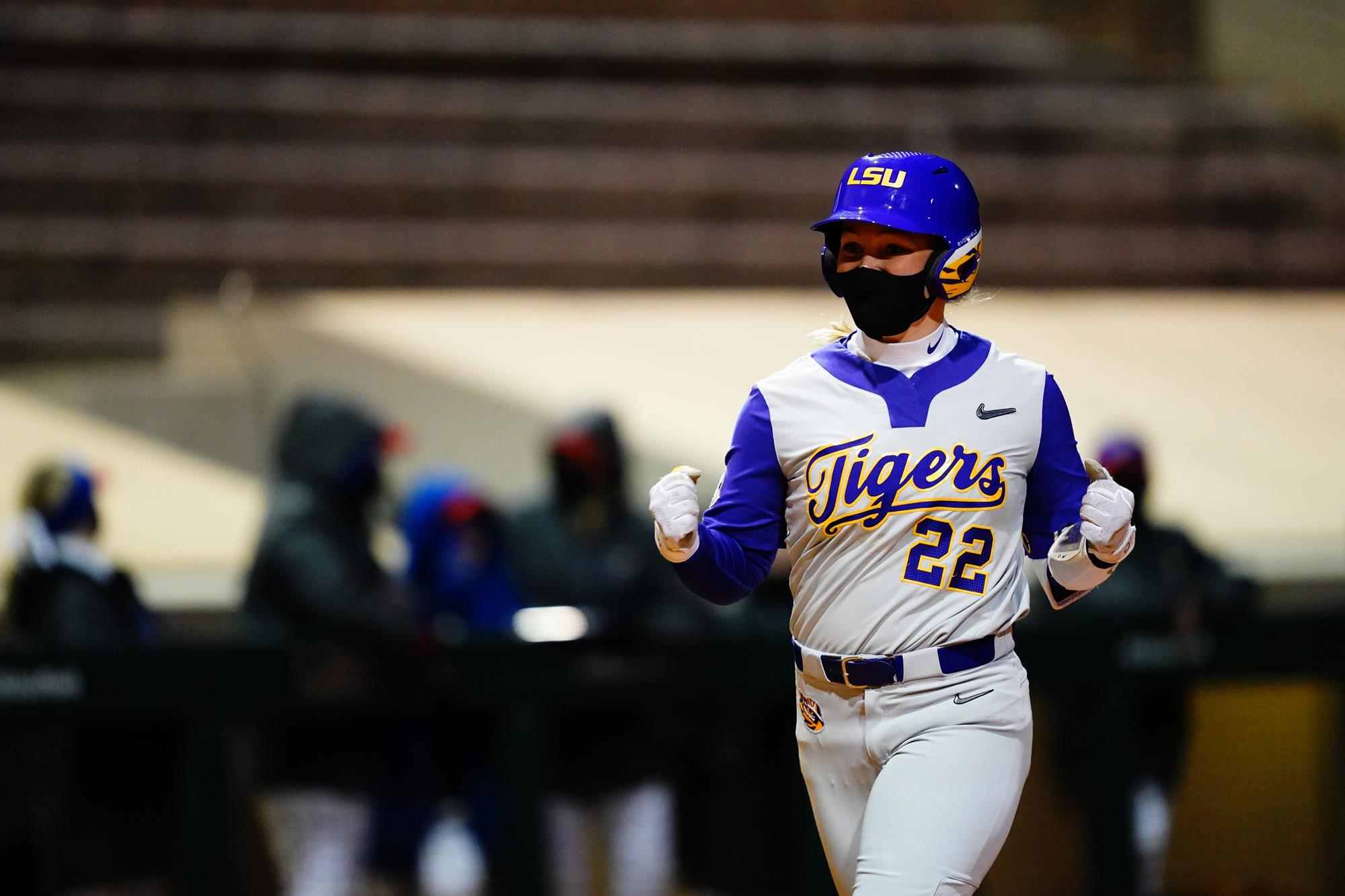 BATON ROUGE – The LSU softball team bounced back to defeat Kansas 5-3 Saturday night in Tiger Park. The Tigers move to 2-1 on the season while Kansas falls to 1-3.

The Tigers will finish up the Tiger Classic Sunday where they’ll square off in a double header against Central Arkansas at 12:30 p.m. and 3 p.m. both games will be available on SEC Network+ and via live stats.

The Jayhawks got on the board first with a solo shot in the top of the second, but the defense got out of the inning without any further damage.

Ciara Briggs cranked a home run over the centerfield wall in the second inning, her second in three games, to even the score at one a piece.

Shelbi Sunseri led off the fourth inning with a double to deep left-center. Briggs added a single and was able to steal second to put Tigers on second and third with one out. Morgan Cummins plated Anna Jones, who pinch ran for Sunseri, on a deep sacrifice fly that allowed LSU to take a 2-1 lead.

In the top of the fifth Kansas, added a homerun to tie the game at two and was able to put a runner on first. The Tigers made a change in the circle, going to Sunseri. Kansas capitalized on an LSU error to push another run across the plate, taking a 3-2 lead. The Jayhawks then loaded the bases, but a quick ground out got the Tigers out of the inning.

In the bottom of the fifth Taylor Pleasants drew a walk and was driven in with a blast to centerfield from Amanda Doyle. Georgia Clark got in on the home run action and drove a solo shot over the left-center wall in the next at-bat. The Tigers plated three in the bottom of the inning to take the lead 5-3.

The Jayhawks placed runner on base in the fifth and sixth inning, but the Tigers were able to hold onto the 5-3 lead and close out the game.

Sunseri earned the win in the circle for the Tigers with one strikeout and moved to 2-0 on the season. Maribeth Gorsuch recorded two strikeouts in four innings of work for the Tigers.

Resiliency of the team…

“I thought they fought hard for this one. I think Kansas battled with us pretty hard. You know, I tell this team all the time, I’ll take a team with guts over a team with talent every day, so I’m super proud of them for getting it done tonight.”

Ciara Briggs at the plate…

I think she has worked so hard to get in the sport that she’s in. She had to put in a lot of work offensively to be in the there, I’ve enjoyed watching her work to get it done. It’s been a great feeling to see her succeed after everything that she’s put into it.

How do you feel looking at the double header tomorrow…

“I think it’s going to be a battle. Central Arkansas is a scrappy team, so we have to show up and be able to play 14 innings with them. It’s going to be cold and 14 innings like that, it’s hard to pitch and hit, but we’re going to come out and just play LSU softball.”