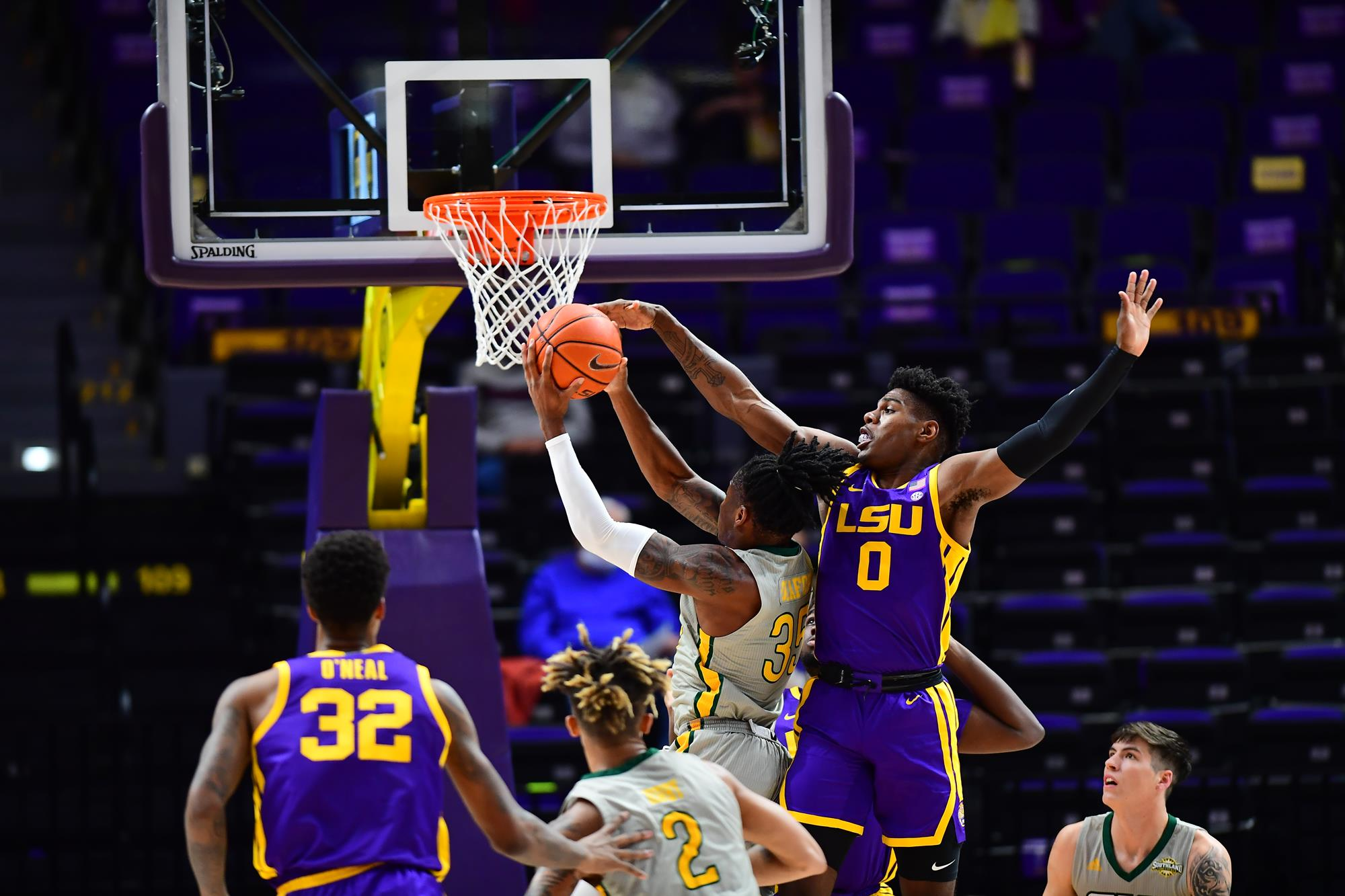 With a 50-18 halftime lead over Southeastern on Monday night, Will Wade sent his troops back to the court with new instructions before the start of the second half.

There would be no layup lines or casual jumpers to shake off the halftime cobwebs. Instead, the Tigers divided into groups of four for defensive drills, closing out on shooters and rotating into helpside.

These guys can score at will, Wade knows. If they can stop at will, too, then they’ll have many more nights like Monday.

LSU (2-1) sent the Lions home with a 96-43 defeat, thanks to a suffocating, switching defense and its customary, swashbuckling scoring attack.. While the socially-distanced crowd enjoying basketball in the PMAC for the first time in 268 days clamored for the latter, Wade celebrated the former.

“We sustained our defense better,” Wade said, still unable to hide his disappointment at giving up 80+ points in each of LSU’s first two contests. “Our communication was much better.”

The Tigers unleashed much more of their defensive arsenal against Southeastern, utilizing full court pressure and a halfcourt matchup zone – equal parts man-to-man and 2-3 zone at times. It kept the Lion attack at bay, as the Tigers held their guests to just 26.7 percent shooting from the floor and 12.5 percent from 3. Wade kicked himself for keeping the defensive tactics hidden in the season opener. His goal was to surprise Saint Louis, LSU’s second foe of the season, but instead, he shorted his team a game to work on communication and get comfortable with a new defensive system.

“We tried to change some things up,” Wade said. “We’ve been giving up 60 percent field goal percentage in the second half. We did some defense in our warm up after halftime, defensive shell and closeouts, and just trying to focus more on that end.”

Mwani Wilkinson’s emergence played a big part. Though the freshman scored 12 points and grabbed 6 rebounds, it was his energy on defense that encouraged Wade, who says he has “a lot of trust in” Wilkinson’s play.

“He’s an unbelievable athlete, and he guards,” Wade said. “His role is going to increase.”

The defense picked up, and the offense kept pace for the Tigers. Credit Trendon Watford and Cameron Thomas, in particular, for that. Watford collected an efficient 20 points on 7-of-8 shooting from the floor. The sophomore is now averaging 19.0 points, 6.0 assists, and 5.7 rebounds per game early in the season, shooting 63 percent from the floor, 50 percent from 3, and 83 percent from the line.

“I’ve been working on it a lot,” Watford said of his shot. “Waking up nine o’clock, 10 o’clock in the morning with Coach Verne (Hamilton), getting 200 makes in in the morning. It’s good seeing all the work paying off, but I’m focused on getting better every day.”

Thomas, meanwhile, continues to shine in his first year of college basketball. The true freshman poured in 21 points, hitting 4-of-8 from 3 and 9-of-10 at the line. If he plays like player beyond his years, it’s because he carries himself that way, too.

In his usual pregame quiz, Wade asked Thomas to name one strength of his matchup for the night. Thomas named all three from the scouting report.

“He’s just so laser focused and locked in on every detail of everything that goes into the game and goes into his preparation,” Wade said. “He just has an unbelievable routing and discipline to everything he does.

“He’s phenomenal. He’s been raised great by his mother, and it’s prepared him for this moment. He’s about as mature and ready of a freshman as I’ve ever coached for the big stage.”

Will Wade gives his players a pregame quiz before every game.

Cam Thomas passed his with flying colors today, before dropping 21 points on Southeastern.

“He’s so laser focused and locked in on every detail of everything that goes into the game and goes into his preparation.” pic.twitter.com/WO4bJbZWpl

Thomas didn’t see Monday as too big a stage. Though it was his much-anticipated home debut, Thomas said he didn’t have any butterflies.

“I’m pretty much built for this,” he said.

“My early success scoring the ball has been my hard work in the gym, and of course, my teammates,” Thomas said. “Playing with older guys is an advantage. Playing with Javonte Smart, Darius Days, and Trendon Watford, they look for me and give me easy shots. So I feel like that’s been a big part of my success.”

Success on that end of the floor is almost a given for Thomas and the Tigers. But it’s the success on the other end that will determine how far they go in 2020-21. Monday was a step in the right direction, but there are many more steps to take.

“There are not going to be many nights where we don’t score 80 points,” Wade said. “We’re going to be as good as our defense and rebounding. If we want to be a championship team, that’s where we’ve got to continue to improve.”

Felt Good To Be Back #BootUp?? pic.twitter.com/xzdMRRGg0p