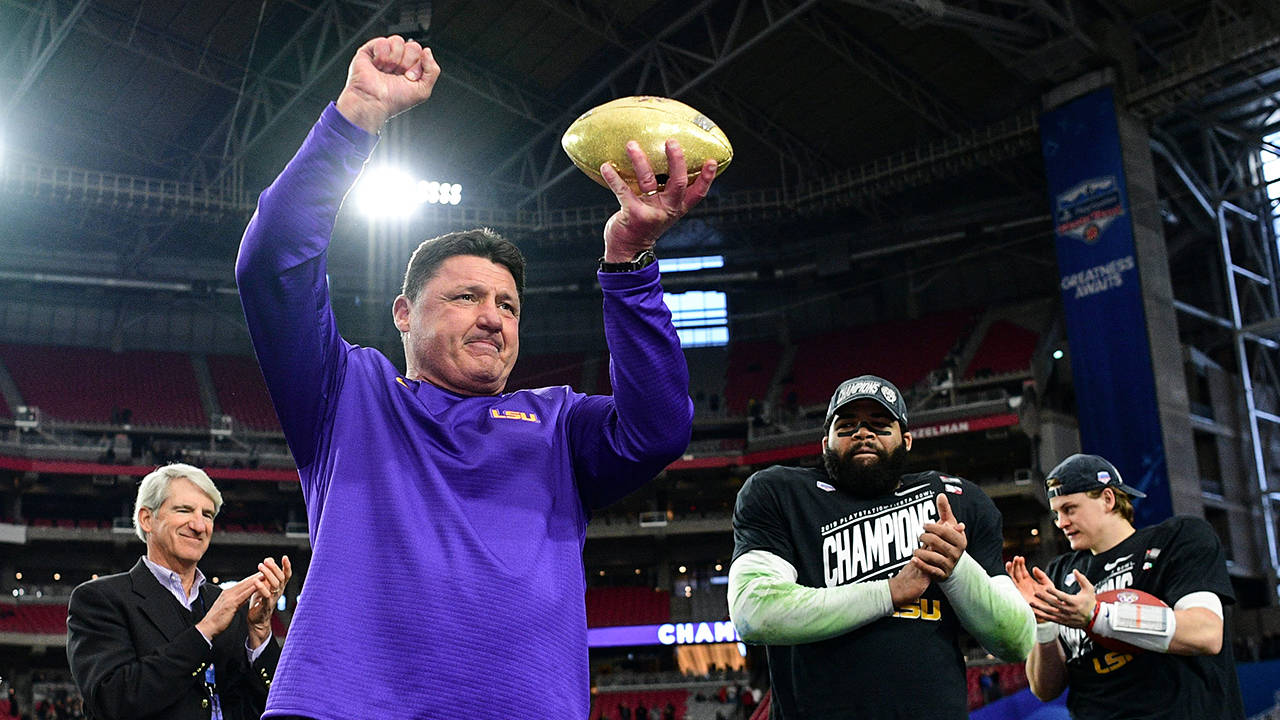 GLENDALE, Ariz. — No. 11 LSU set a school record with its fourth top-10 victory of the season, handing previously undefeated and seventh-ranked Central Florida a 40-32 defeat in the 2019 PlayStation Fiesta Bowl on Tuesday in Glendale, Ariz.

The Tigers trailed 14-3 following a pick-6 midway through the first quarter but rallied with 21 unanswered points until the final seconds of the second quarter. Following a Ja’Marr Chase early in the third quarter, LSU maintained a double-digit lead throughout the second half. UCF cut its deficit to the final margin with 2:24 to play but failed to get an onside kick and later threw an interception with 20 seconds to play.

Freshman wide receiver Ja’Marr Chase had a game-high six receptions for 93 yards with a touchdown, while Justin Jefferson added four catches for 87 yards with touchdown grabs of 22 and 33 yards. Stephen Sullivan had three catches for 76 yards, and Derrick Dillon had a career-best 86 yards receiving including a 49-yard touchdown.

Running back Nick Brossette became the 13th Tiger to record 1,000 rushing yards in a single season, as the senior had 117 yards on 29 carries.

LSU senior placekicker Cole Tracy – who spent the first three seasons of his career at Division II Assumption College – made all four of his field goal attempts (24, 28, 28, 26) to set the NCAA all-division record with 97 career field goals and the LSU single-season record with 29. He also finished his career with 506 points, good for 19th in NCAA history.

Defensively, linebacker Patrick Queen led the Tigers with nine tackles with a sack, while linebacker Devin White had eight tackles, a pass breakup and a forced fumble that led to Dillon’s touchdown. Safety JaCoby Stevens iced the game with a last-minute interception while collecting six tackles, a half-sack, and three quarterback hurries. Defensive tackle Rashard Lawrence dominated up front, earning Defensive Player of the Game honors with five tackles – four behind the line of scrimmage – with two sacks.

National Signing Day is set for Wednesday, Feb. 6. The Tigers signed 19 players in the Early Signing Period (Dec. 19-21) and may sign up to six more for the 2019 class.

Dates for spring practice have not yet been announced.

LSU will open the 2019 season on Aug. 31 when the Tigers play host to Georgia Southern in Tiger Stadium. Game time for season opener is expected to be announced in the early summer.

LSU won the coin toss and elected to receive the opening kickoff for just the second time this season.

LSU’s Clyde Edwards-Helaire fielded the opening kickoff at the LSU 7 and scampered 77 yards to the UCF 16. After an 11-yard run by Brossette, LSU’s drive stalled on a false start from the 1-yard line. Following an incomplete pass to Brossette on third-and-goal from the 6, Cole Tracy connected on a 24-yard field goal to give LSU a 3-0 lead with 12:38 remaining in the quarter.

Tigers placekicker Avery Atkins‘ plant leg slipped on the unique indoor grass field, advancing only 40 yards. From its 31, UCF used a throw-back pass by Marlon Williams to Mack for 23 yards to the LSU 43. Four plays later, Greg McCrae ran for a 25-yard touchdown to give the Knights a 7-3 lead with 10:56 left in the quarter.

Burrow completed passes of 14 yards to Ja’Marr Chase and 17 to Jefferson to move the Tigers into UCF territory again, but he wasn’t on the same page with Dillon on a third-and-8 pass that was intercepted and returned for a 93-yard touchdown by Brandon Moore. UCF led 14-3 with 6:39 remaining in the quarter.

The wild opening stanza wasn’t over, as LSU marched 67 yards in 11 plays to cut into the Knights lead. The Tigers appeared to be stopped on the UCF side of midfield, however, an unsportsmanlike conduct penalty on defensive lineman Randy Charlton kept the drive alive. After Brossette earned a first down with a short run on fourth-and-1, Burrow completed a 22-yard pass to Jefferson in the back-left corner of the end zone.

Despite its lack of numbers, LSU’s defense stepped up in the second quarter, as Butkus Award winner Devin White stripped Mack of the ball and linebacker Michael Divinity Jr. recovered at the UCF 48. Following the play, LSU’s secondary took another hit when cornerback Terrence Alexander was disqualified.

Burrow overcame a sack on the ensuing drive by connecting with Derrick Dillon for a 49-yard catch and run that resulted in a touchdown on third-and-7. LSU took its first lead, 17-14, with 12:59 left in the half.

A quick three-and-out was forced by the LSU defense, as Rashard Lawrence busted a quick pass in the backfield for a 5-yard loss on first down. Mac Loudermilk’s 58-yard punt was downed at the LSU 22.

Burrow went to the air and again found success against the Knights defense completing passes of 19 yards to Stephen Sullivan, 9 yards to Chase and 8 yards to Edwards-Helaire into UCF territory. Three plays later, UCF’s Kyle Gibson was ejected for a targeting hit on Burrow. LSU overcame a holding penalty with a beautiful 33-yard touchdown pass from Burrow to Jefferson on first-and-20. The Tigers led 24-14 with 7:11 left in the half.

UCF was able to work its way into LSU territory with a 20-yard run by Mack and a targeting call on LSU all-America safety Grant Delpit, who became the second member of the Tiger defensive backfield to be ejected in the game. On fourth-and-5 from the LSU 31, LSU safety JaCoby Stevens broke up a pass to turn the ball over to the Tigers.

After more than 25 minutes without a punt in the contest, the teams exchanged three in the next three minutes.

UCF was able to march 95 yards in 10 plays, finishing with a 32-yard catch by Gabriel Davis for a touchdown with 0:04 remaining.

LSU linebacker Jacob Phillips returned to the LSU lineup after sitting out the first half following a targeting penalty in the third overtime of the regular-season finale against Texas A&M. The sophomore made the first tackle of the second half as the Tigers defense forced a three-and-out to start the period.

Big plays by the Tigers offense – 16-yard catch by tight end Foster Moreau and a 24-yard run by Brossette – setup a 32-yard touchdown catch by Chase with 12:38 left in the third period. With the passing TD, Burrow tied LSU’s bowl record for touchdown passes (Matt Flynn had 4 vs. Ohio St. in 2007 BCS National Championship).

Following another three-and-out by the Knights, LSU used 6:35 from the clock to advance to the UCF 5. A penalty on fourth-and-1 forced LSU to settle for a 28-yard Tracy field goal.

Though the Tigers defense continued to dominate in the second half, a muffed punt by Jefferson gave the Knights great field position at the LSU 21. The Knights made no forward progress and also settled for a 37-yard field goal by Matthew Wright that cut the lead to 34-24 with 3:01 left in the quarter.

LSU matched the Knights field goal with a 28-yarder by Tracy that pushed the LSU advantage to 37-24 with 12:09 left in the contest.

UCF kept its remaining fans in their seats with a 10-play, 75-yard drive that ended with a 2-yard touchdown by Taj McGowan with 2:24 remaining.