Passing Game Fires on All Cylinders in Fiesta Bowl Win 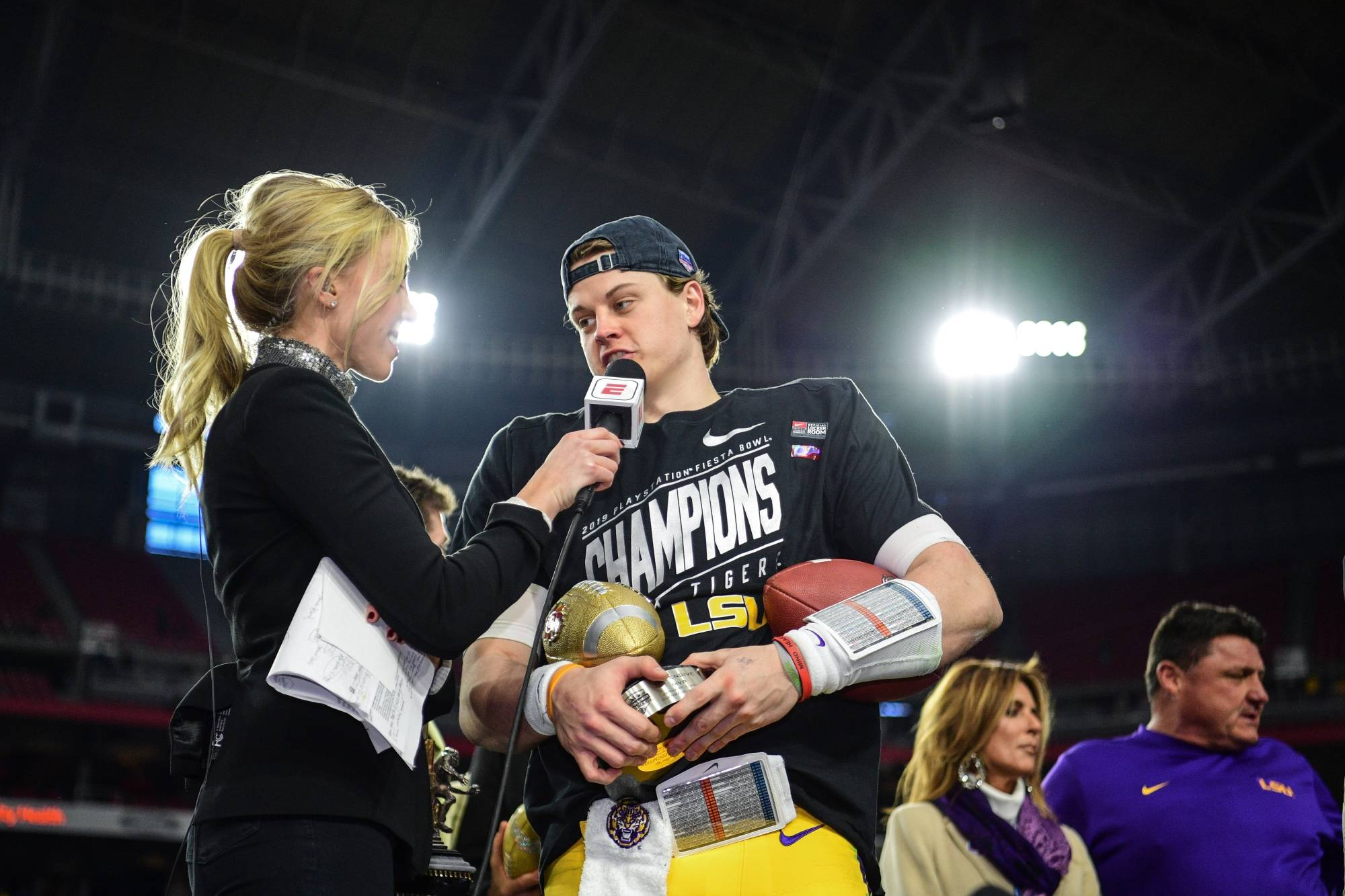 SCOTTSDALE, Ariz. – Joe Burrow has one thing – and one thing only – to say about that hit.

You know – the first-quarter, blindside hit that came after the junior quarterback and PlayStation Fiesta Bowl Offensive Player of the Game tossed his only interception of the game? The one that left a gash on his neck and kept him on the ground – and Tiger fans on the edges of their seats or on their knees in prayer – for a few, agonizing moments.

“The only thing I’m going to say about it is this,” Burrow said after the game. “The only reason I didn’t get up in one second was I got the wind knocked out of me. I would’ve gotten up immediately if that didn’t happen.”

That answer elicited laughter and smiles from his teammates and his head coach, but nothing made them happier than Burrow’s 21-of-34, 394 yard, 4 touchdown performance in a 40-32 win that snapped UCF’s 25-game winning streak and gave LSU 10 wins in a season for the first time since 2013.

Whatever happened on that hit, Burrow rose a different quarterback. Before it, he was 2-of-6 passing for 31 yards, no touchdowns, and the interception – a 44.3 passer rating.

That’s Ight I’ll take the 4 tds and the dub https://t.co/VVDLdQbqNW

In all, Burrow was 21-of-34 for a career-high 394 yards and four scores. The touchdowns tied Matt Flynn’s record set in the 2007 national championship game for an LSU bowl game record.

Burrow’s thinking after the hit was simple.

“Score touchdowns. Complete passes,” he said. “I didn’t think about the hit too much after I got up. It hurt for a second, then I got right up and moved on to the next play.”

Burrow, a Ohio State graduate transfer with another year of eligibility remaining in 2019, came to LSU this summer and won the starting job, finishing the year as the first quarterback in school history with 2,500 passing yards and 350 rushing yards. He also became the second quarterback to win 10 games in his first season as starter.

“I’m glad we went to Mike Anderson’s and he liked the crawfish,” Orgeron joked. “I think that’s what got him (here). I’m proud of Joe, the way he plays. He’s smart. Tonight, I thought (offensive coordinator) Steve Ensminger did a great job calling the plays. The receivers did a good job. Joe’s an excellent quarterback. We believe in him. He’s got excellent leadership skills. He comes to practice every day, works every day. He’s exactly what we feel an LSU quarterback should be.”

Orgeron said after the game he thought the hit should’ve been called targeting. Later, Burrow took another hit that was ruled targeting and led to a player ejection. He left the field after the win with a gash on the side of his neck, but reiterated he felt fine.

When it comes to showing toughness, Burrow feels he has no choice.

“It’s very important for leaders to exude toughness for the entire game,” he said. “It doesn’t start in the season. It starts in the offseason in the weight room. If your best leaders aren’t your best workers, you’re not going to be a very good football team.”

For Burrow, his Fiesta Bowl success was the product of an entire offense playing its best. That includes an offensive line that gave up just two sacks on the day, including none after halftime.

“Passing always starts with protection,” Burrow said. “Tonight, those guys did a hell of a job. They played their (hearts out) for me. It gives us a lot of momentum going into next year. I think we’re going to be really special and do some great things as long as we keep our feet on the gas pedal and keep working.”

“All of those young receivers got a lot better throughout the season,” Burrow said. “I haven’t seen a group of young receivers as advanced as those guys in my time in college. They have a ways to go, and they’re really good right now. Those guys are going to be special.”

The Tigers are set to return all of those receivers, as well as standouts like Terrace Marshall and Dee Anderson. That bodes well for a passing game that progressed throughout the season and heads into the offseason on a high note.

“It looked like the passing game we wanted,” Orgeron said. “We had 30 days to get ready. Joe was on the money. We have some tremendous receivers. We want to run a spread offense, create space, put the ball in our playmakers’ hands.  I grade the passing game tonight an A+. It’s exactly what I dreamed about our passing game being for LSU.”