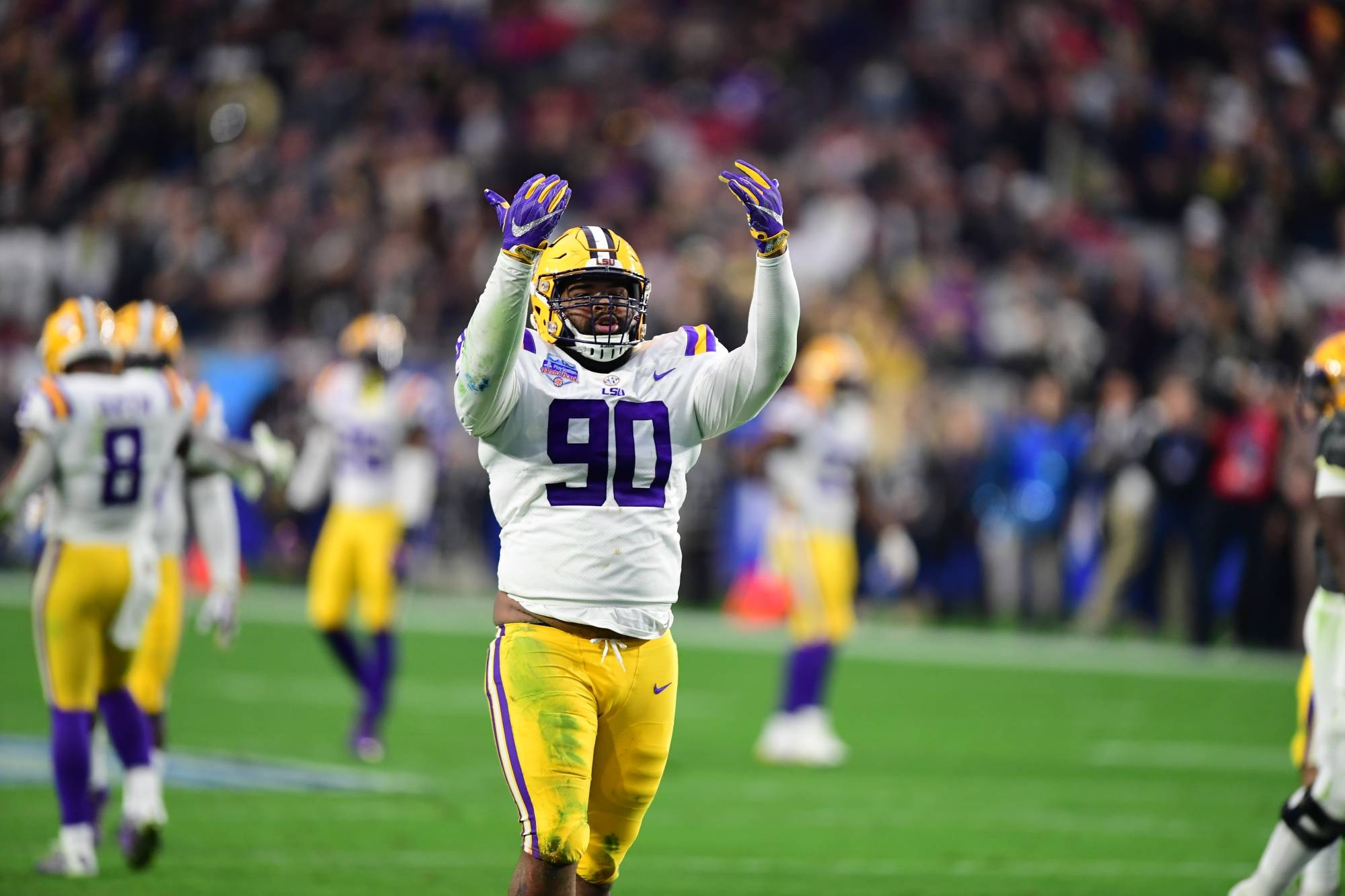 For three years, Foster Moreau has practiced, week in and week out, against defenses coached by Dave Aranda.

He knew before LSU’s 40-32 win in the PlayStation Fiesta Bowl over UCF what the Golden Knights found out during the game, in which the Tigers played without almost an entire unit of defensive starters and key reserves.

“Coach Aranda is going to do a great job with game plan and scheme,” Moreau said. “Regardless of who’s playing we have one of the best defenses in the country, no matter what.  A lot of guys who used to play offense stepped in and shut guys down. Just to come out with a win, it speaks to the 120 men on this football team, from the starting quarterback to the look squad and the long snapper. Everyone has a role, and everyone’s role is equally important.”

Those roles changed on Tuesday, as LSU either began the game or finished the game without an entire defense’s worth of players. That includes starters up front (Breiden Fehoko, Ed Alexander), at linebacker (Jacob Phillips for a half, K’Lavon Chaisson, Michael Divinity for a time in the second half), and in the secondary (Greedy Williams, Terrence Alexander [ejected], Grant Delpit [ejected], and Kelvin Joseph).

In their places, however, other stars emerged, as the Tigers held the nation’s third-ranked offense to 250 yards and just five first downs after halftime.

Chief among them was junior lineman Rashard Lawrence, the game’s defensive MVP. Anchoring the Tiger front, Lawrence finished with five tackles, four for loss, and two of LSU’s five sacks.

“It all started with him up front,” said Butkus Award winner and consensus All-American Devin White, who finished the game with eight tackles and a forced fumble. “When he plays well, the whole defense plays well. He came with it today.”

Lawrence said he focused on his conditioning in the month leading up to the game, knowing he’d have to deal with both UCF’s intense offensive pace and a lack of depth up front. By game time, LSU was without Fehoko, Alexander, Davin Cotton, Nelson Jenkins, and Neil Farrell, but Lawrence was happy to pick up the scraps.

“I’ve really been working on my pass rush, trying to have a good get off,” he said. “Today, they got me isolated with some one on one situations, and I took advantage of it.”

He wasn’t the only one to make the best of advantageous matchups. JaCoby Stevens finished with six tackles, including 0.5 sacks and 0.5 for loss, and iced the game in the fourth quarter with an interception. He started the game in the quarter spot – a hybrid safety/outside linebacker near the line of scrimmage – but moved around after Delpit, a unanimous All-American, was ejected in the first half for targeting. His six pressures matched Lawrence for team-high honors, as the Tiger defense disrupted UCF quarterback Darriel Mack 19 times.

“We lost one of our best players in Grant Delpit, and our guys stepped up,” head coach Ed Orgeron said. “Todd Harris, John Battle, JaCoby Stevens…Look at the DBs we didn’t have in this game. Nobody blinked. There were going to be no excuses. We’re going to put 11 men on the field and fight like Tigers. These men and that coaching staff are doing something special at LSU.”

Perhaps the best example of that was sophomore cornerback Kary Vincent. The second-year corner moved from nickel to the outside and played tremendously, not allowing a single completion on just three targets.

This, just days after his father passed away. With Williams and Joseph out before the game and Alexander ejected during it, Vincent locked down his side of the field against a dynamic passing attack, despite playing with a heavy heart.

“You think about Kary Vincent who lost his dad the day before we got on the plane,” Orgeron said. “He came and played for his father. You think about the grit and toughness it took for that young man to get on that plane, come to practice every day and not blink.”

Other players played their roles, too, from wide receivers-turned-corners Mannie Netherly and Jontre Kirklin to Patrick Queen, who registered a team-high nine tackles, all in the first half, while Jacob Phillips sat for a targeting suspension picked up in the regular season finale.

“We just came in with the next man up mindset, especially for the defense,” White said. “I told them it was a great opportunity to make a name for themselves, and a lot of people did that.”

Lawrence wasn’t surprised, by his performance and even less by the play of those around him. That’s what his defense has done all year: rise to the occasion.

“When you look at it, that’s one of the strengths of our team: leaning on each other when tough times come,” he said. “We’ve been through a lot, on and off the field , and it’s pretty easy when you got brothers that you love playing with you week in and week out. We don’t like to complain too much. It does get tough, but we have each other and we keep on pushing.”