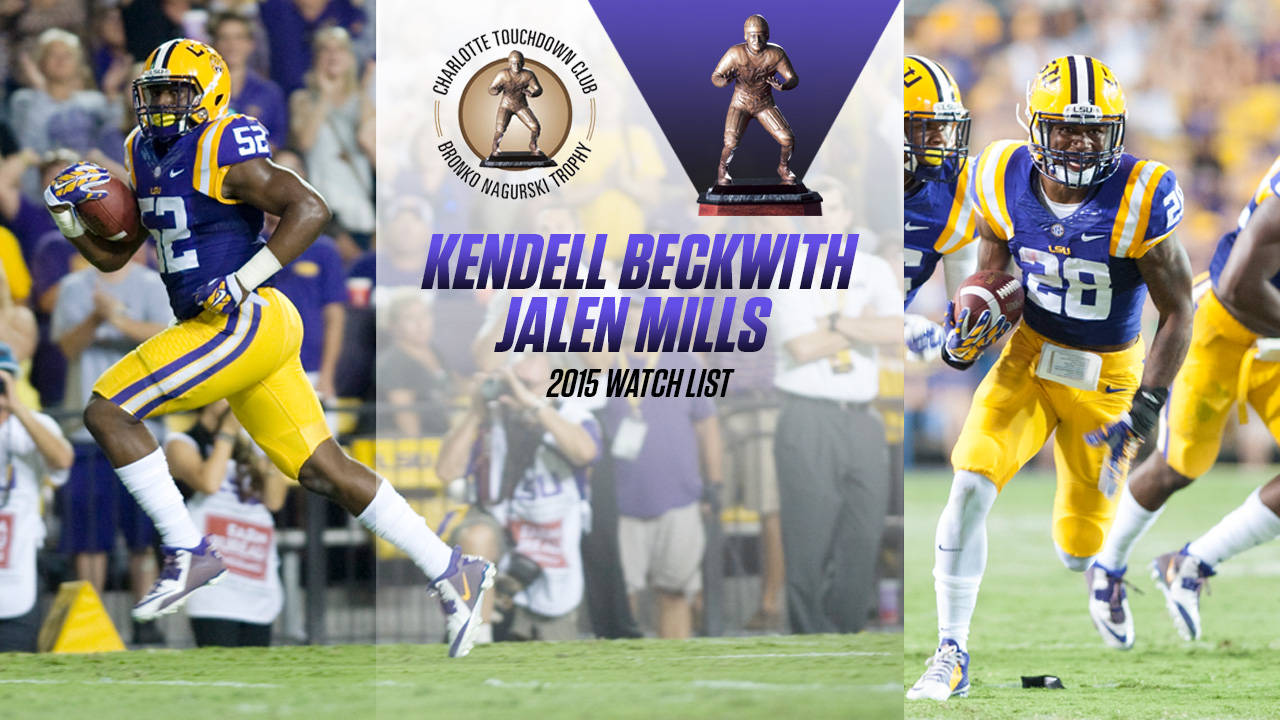 The Nagurski Trophy is awarded to the best defensive player in college football each season.

A total of 88 players make up the Nagurski watch list, including Beckwith and Mills, and more players are available to be added each week once the season starts.

Mills enters his senior season having started all 39 games in his career, racking up 186 tackles and six interceptions.

The Desoto, Texas native will begin his second season as a starter at safety after spending his first two seasons as a starting cornerback.

Beckwith, who started the final seven games of the 2014 season, enters his first full season as the starting middle linebacker after he accumulated 77 tackles, 7.5 tackles for a loss, two sacks, three pass breakups, two quarterback hurries, two fumble recoveries and one interception that he returned 29 yards for a touchdown last year.

A gifted athlete, Beckwith will serve as a leader for the Tigers’ stout defense that ended 2014 ranked No. 1 in the SEC in total defense and No. 2 in scoring defense.

The FWAA and the Charlotte (N.C.) Touchdown Club will announce the five finalists on Nov. 19, and the winner will be selected on Dec. 7 at the annual Bronko Nagurski Trophy Banquet in Charlotte.

The Bronko Nagurski Trophy winner will be chosen from those five finalists who are part of the 2014 FWAA All-America Team. The FWAA All-America Committee, after voting input from the association’s entire membership, selects the 26-man All-America Team and eventually the Nagurski finalists. Committee members, then by individual ballot, select the winner, the best defensive player in college football during the FWAA’s 75th anniversary year.

The annual Bronko Nagurski Trophy Banquet, presented by ACN, will be held on Dec. 7 at the Westin Hotel in Charlotte. In addition to the 2015 Bronko Nagurski Trophy winner’s announcement, the banquet will also celebrate the recipient of the Bronko Nagurski Legends Award, sponsored by the CTC and Florida East Coast Railway. Ohio State’s Randy Gradishar, a member of the FWAA’s 1973 All-America team and a College Football Hall of Famer, will be honored. Auburn head coach Gus Malzahn will be the keynote speaker at the banquet.

The FWAA has named a National Defensive Player of the Year since 1993. In 1995, the FWAA named the award in honor of the legendary two-way player from the University of Minnesota. Nagurski dominated college football then became a star for professional football’s Chicago Bears in the 1930s. Bronislaw “Bronko” Nagurski is a charter member of both the College Football and Pro Football Halls of Fame.