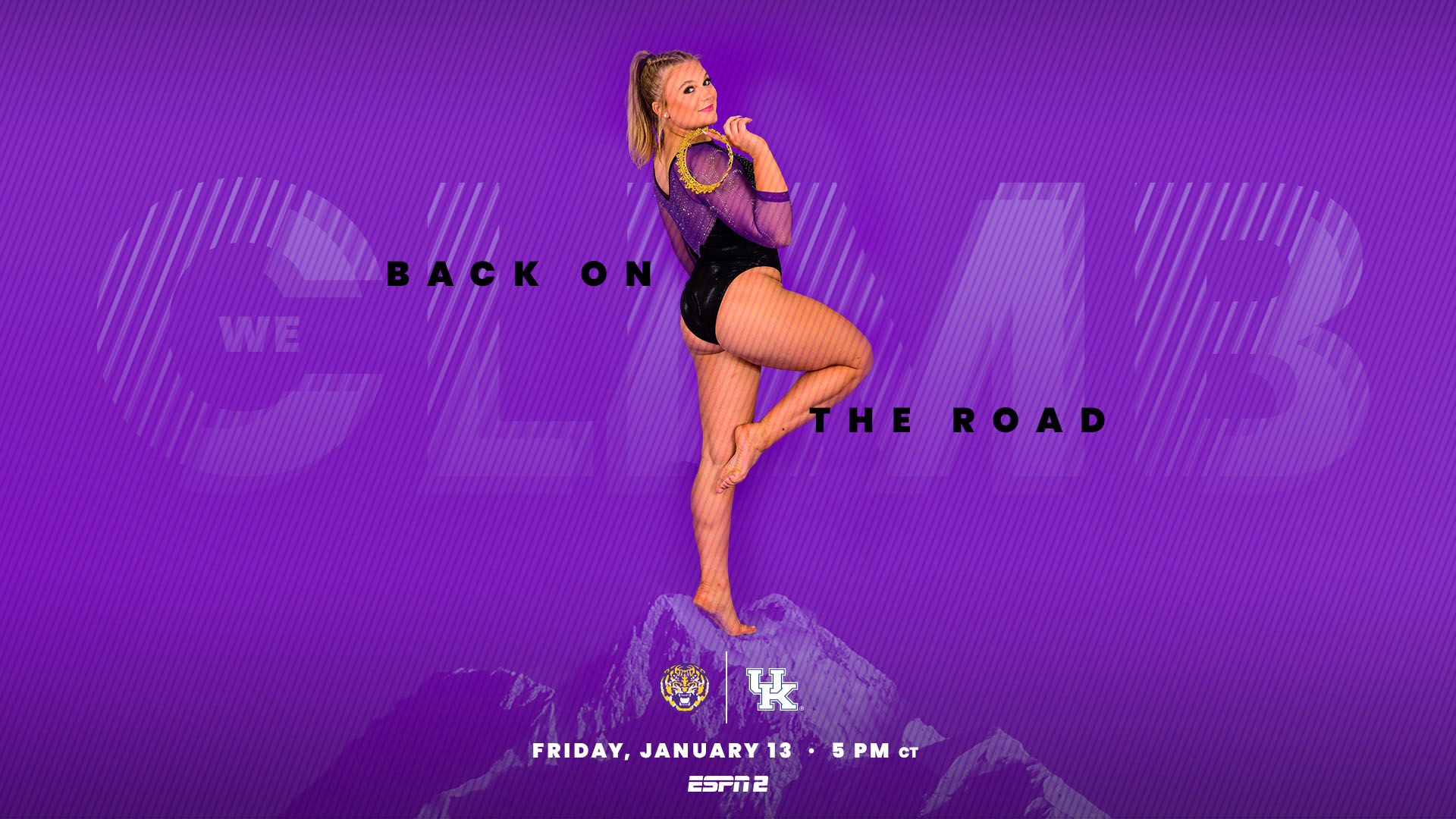 LEXINGTON, KY. – No. 10 LSU Gymnastics continues its road trip as the team travels to Lexington to face No. 12 Kentucky on Friday, January 13, at 5 p.m. CT in Rupp Arena.

The top-20 matchup between the Tigers and the Wildcats opens conference matchups and will be nationally televised on ESPN2. John Roethlisberger will be in the arena on the play-by-play call with Alicia Quinn as the analyst. The first rotation is set for 5:02 p.m. CT in Lexington.

“We are going to Kentucky to make improvements week after week,” said head coach Jay Clark. “Our team has to be committed to that and nothing more. They know where the opportunities for improvement lie and they have worked in those areas. Now, we need to see that carry over.”

The Friday Night Heights competition between LSU and Kentucky will be the first time the two teams meet in Rupp Arena.

The Tigers own an all-time record of 84-9-0 over the Wildcats with a regular season record of 72-8-0. The last time the two teams met, Kentucky took the victory inside the Pete Maravich Assembly Center with a score of 197.500-197.450.

LSU will look to get back in the win column on Friday night for the first time inside the arena.

The Tigers began the 2023 season ranked No. 6 in the preseason as they traveled to Salt Lake City for the season opener against No. 3 Utah. The squad put on a strong opening performance in Jon M. Huntsman Center and earned the highest score in a road season opener in program history with a 196.775.

Aleah Finnegan had an explosive start to her sophomore year. The Lee’s Summit, Missouri, native competed in the all-around for the first time in her career.

The sophomore also took the all-around title on the night with a score of 39.450, alongside junior Haleigh Bryant.

The program returns experienced routines to the lineup with All-Americans Johnson, Shchennikova and Haleigh Bryant. Johnson and Bryant are expected to compete in the all-around on Friday night against the Wildcats, along with Finnegan.

Johnson, an eight-time All-American, owns honors on all four events as well as the all around. The Texas native was the SEC Specialist of the Year and Floor Champion in 2021. The senior owns seven perfect scores in her career, with four on floor, two on beam and one on vault.

Shchennikova, a two-time All-American on vault and uneven bars, has been consistent throughout fall training and is on track to make her final season her best yet.

Elena Arenas is another gymnast who has shown consistency throughout her career and in fall training. The junior from Athens, Georgia, won the SEC vault title in 2021 and is expected to compete on vault and uneven bars against Kentucky. Arenas provides depth on all four events and could make an appearance as an all-arounder this season.

An eight-time All-American, Bryant’s front handspring-front pike half is considered to be one of the best vault’s in collegiate gymnastics. The junior finished the 2022 regular season as the No. 3 vaulter in all of NCAA Gymnastics and owns five career perfect 10’s on the event.

A native of Gainesville, Virginia, Cammy Hall transferred to LSU from Utah for her fifth-year. Hall suffered an achilles injury during fall training and is out for the season, but will continue to have an important role on the squad.

Rivers made her return to the lineup in 2022 after dealing with an achilles injury. After a battle with injury throughout her career, she is expected to lead the Tigers off on balance beam this season. The senior provides an important role on the squad as a veteran leader and voice.

Sophomores KJ Johnson and Finnegan are prepared to make an immediate impact this year after an impressive freshman season in 2022. Alexis Jeffrey, who transferred to the Purple & Gold last season, debuted on bars against Utah and will be a consistent contender on the event. Tori Tatum has the potential to make her debut on uneven bars and vault after suffering from an injury last year.

Freshman Ashley Cowan and Bryce Wilson also have the potential to break a lineup this year. Cowan, a native of Hillsborough, North Carolina, has been training the uneven bars. Wilson, a native of Lake Charles, Louisiana, has the potential to make an appearance in the vault and balance beam lineups. The two competed at the squad’s Gym 101 showcase in December and are ready to make their collegiate debut.