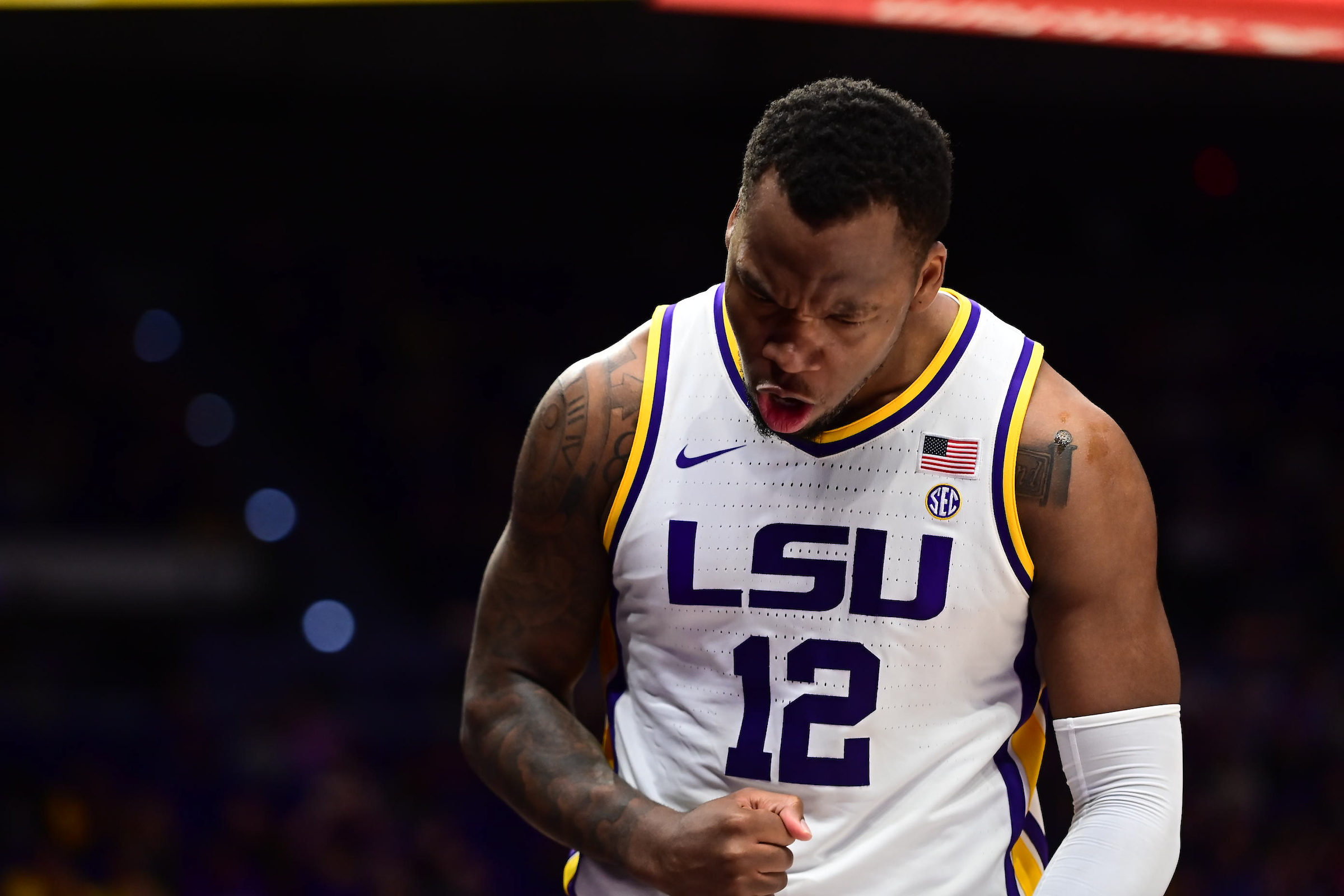 BATON ROUGE – The LSU Tigers were unable to stop the Florida Gators in the second half, outscoring LSU, 42-28, en route to a 67-56 decision in a Southeastern Conference game Tuesday night at the Pete Maravich Assembly Center.

KJ Williams, on his way to 2,000 career points, scored a game-high 23 points with seven rebounds. He was the only scorer in double figures for the Tigers. Trae Hannibal led all players with 12 rebounds while Juice Hill had six assists for LSU.

Colin Castleton had 18 points to lead Florida, 12 of that coming at the free throw line to go with two assists and five blocks. Kowacie Reeves had 11 points as the only other Gator in double figures. For the game, Florida shot 39.6 percent (19-of-48) with five treys.

LSU did get the advantage on the boards, 40-34, but LSU’s 16 turnovers resulted in 23 points off turnovers for the Gators while LSU scored just five off the 10 Florida miscues.

The Tigers jumped out to a 7-0 advantage in the first 3:20 of the game, but Florida would score the next eight to take an 8-7 lead with 13:59 to go in the opening stanza. The Tigers would open a 24-16 lead, their biggest of the night, off an Adam Miller three-pointer with 6:49 to go and after Florida tied it at 25 after an LSU turnover led to an easy bucket with 1:54 to play, the Tigers got the final points of half on a three-pointer by Tyrell Ward.

Ward would play 17 minutes with both Cam Hayes (knee) and Mwani Wilkinson (shoulder) in street clothes and finished with six points.

The Tigers and Gators battled evenly through the first few minutes of the second half with LSU leading, 36-34, with 15:16 to play. Florida then scored the next seven points to go up 41-36 and the Tigers never got closer than three points the rest of the way.

LSU travels to Tuscaloosa Saturday to take on the Alabama Crimson Tide at 3 p.m. on the affiliates of the LSU Sports Radio Network and ESPN. LSU plays back-to-back home games next week against Auburn and Tennessee.

“A lot to cover. I’ll leave some of it to your questions. Obviously, I’ll start off by giving Florida great credit for coming in here and getting a big road win. I think for us, you have opportunities to win games. We got to find ways to eliminate self-inflicted wounds. You look at 16 turnovers that go to 23 points on the other end. Our inefficiency on the offensive end from a shooting standpoint. I though there were a couple stretches that really hurt us. Number one, I thought our start, while terrific, you’re out 7-0. I thought our defense followed the game plan and did the things we needed to do there. I don’t think we took advantage of it. I thought we had some opportunities to execute offensively there and build on the lead. We had some turnovers and some iso-ball. One-on-one iso-ball – that’s not going to be the strength of our team and that’s okay. But we’ve got to move the ball and execute, and I thought that stretch hurt us. After a really good first half defensively where we were able to protect our paint better, limit some of (Colin) Castleton’s touches, force them into, I believe, 17 of their 28 shots behind the arc in the first half. I thought in the second half, they really put their head down and drove us. Our ability to protect the paint was not effective, and I think that shows in the free-throw line. Their two-point shooting in the second half, which I believe was 9-for-12. We’re not going to be able to win games turning the ball over like that and then having some of those breakdowns around the rim.”

On what the main problem for the night could have been…

“I’ll always first say credit to Florida for playing good defense, but their length and athleticism bothered us some. I think after every game it’s back to the drawing board and re-evaluate how we can get some higher quality looks that we’re more capable of making. How can we find a way to eliminate turnovers because the first two opportunities in league play we had to win – you split those, we average nine turnovers a game. Our last two games, 31 turnovers in the two games. It’s just not going to give us a chance there.”

On the amount of physicality with (Colin) Castleton…

“That’s a part of the game plan every game, go out and play physical and aggressive against your opponent on the offensive end and the defensive end. On the offensive end, trying to get into the paint often and draw fouls. We got a couple there. On the defensive end, we tried to deny him out so we wouldn’t have to be in rotation with him. Credit to him, he is a great passer and a great scorer, so he gets his offensive players open as well. He can score around the rim with both hands. It’s a part of basketball. It’s an aggressive game, competitive game, different types of competitiveness in this game, so we just tried to come out and be aggressive from the jump.

On not making the offensive struggles a trend…

“Go out and find ourselves as a whole. As a team we have to come together. I think we slipped up in that part a little bit. Come in and talk about whatever and get through whatever as a team instead of wandering off as one and having small groups. We have to come in together. Our leaders, me as well, have to come in and help the team to build it to where when we are in situations like this being down by eight, being down three, we can put that to the side and keep playing and pushing through adversity. I just think we have to find ourselves as a whole and keep playing basketball and it’s going to work out.”

On Tyrell Ward getting extra time…

“I talk to Tyrell often. I told him a couple of stories from when I was a freshman at Mississippi State, and I would let him know to stay prepared. You never know what will happen, someone could get hurt. Anything could happen is what I was telling him. Keep working out, he stays in the gym. I probably see him work out two times a day. He is probably one the hardest workers on this team. That’s what happens when you stay prepared, you’re able to come in the game, be effective, and make an impact.

On the turnovers and sloppiness tonight with ball security…

“We just have to come together as a team, be more locked in. I don’t really have an explanation why we turned the ball over, but it is something we will work on for sure moving forward. Coach will have us in tomorrow explaining how bad the turnovers hurt us. He just told us about it when we went up the turnovers turned to 23 points.”

On his team’s defensive performance…

“It is what our identity has become. We felt like we could be good defensively, but early on our transition defense was eating us up. When we made that conscious decision after Portland to address that, we have been really hard to score on the last month and a half. Our guys are pouring into what we are doing and being coachable. They are executing very well. We did a lot of things tonight that we do not normally do defensively. We switched a lot, when generally we are pretty sticky man-to-man defense. It is the guys. They are doing a great job guarding. This LSU team has a lot of talented players and for the most part we shut them down.”

On going into the half shooting 29%…

“We felt good at halftime. We did not make a shot in the first half, and we were only down three points. The message to the guys was to continue defending, rebounding, and taking care of the ball. At the end of the day, somebody has to step up and hit some shots to get us over the hump. We did a wonderful job in the second half getting to the foul line. The two threes we hit, I think Myreon Jones hit one and Riley (Kugel) hit one in the corner in front of our bench, and those were huge threes. In a game like tonight where neither team is shooting the ball particularly well, those felt like five pointers.”