"The Ball Is Tipped And There You Are ..." LSU Basketball Season Begins Wednesday 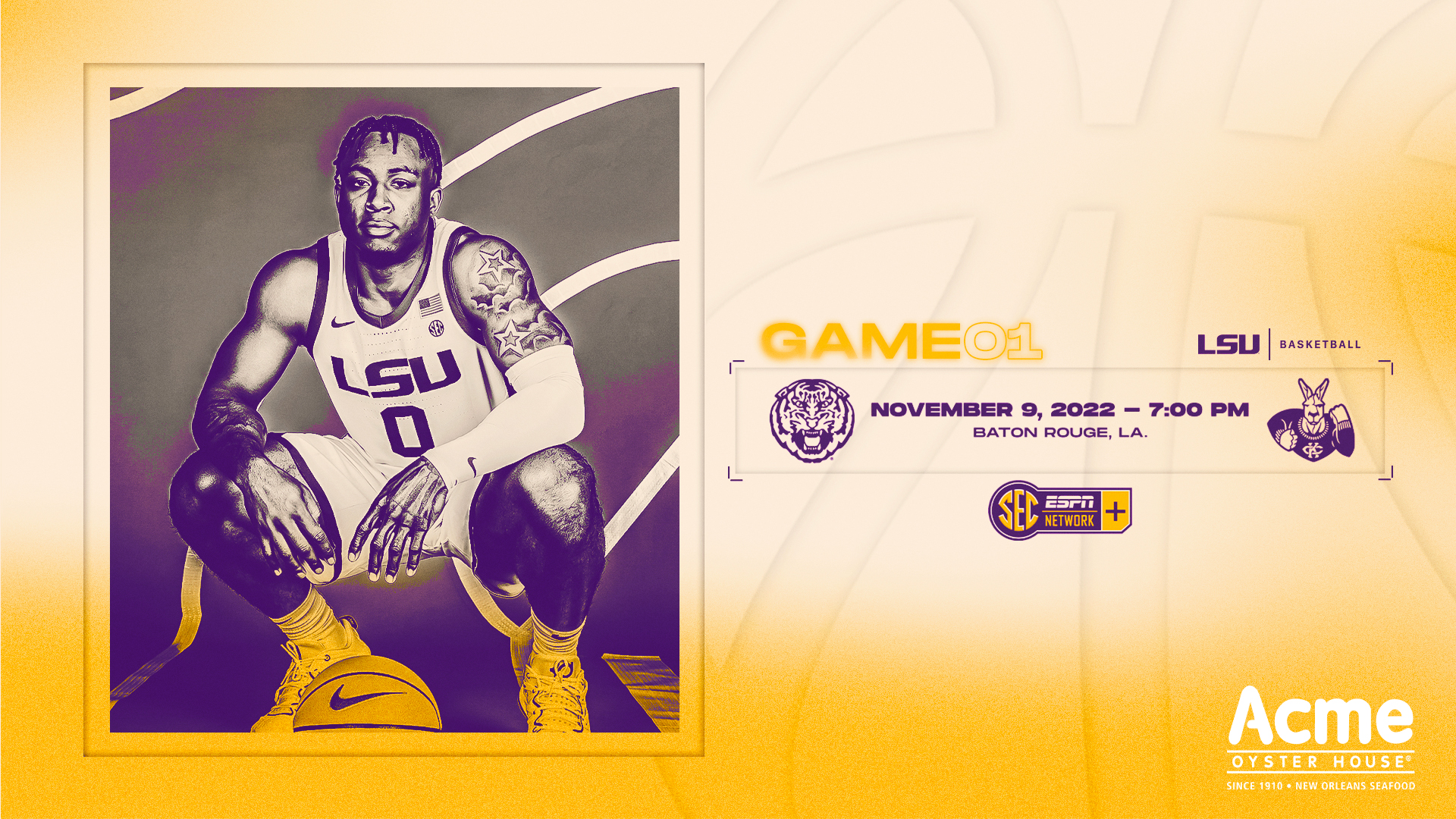 With those words, Coach Matt McMahon put the first brick in the new foundation of LSU basketball when he took the podium after accepting the job in late March of 2022.

Wednesday night at the Pete Maravich Assembly Center, those words will hopefully become visible actions as the LSU Tigers open the 2022-23 men’s basketball season with a 7 p.m. game against the Kansas City Roos.

Tickets for the game are available online at the LSU Athletics Ticket Site, LSUtix.net, and at the upper concourse windows of the Maravich Center beginning at 6 p.m. on game night. Tickets can be purchased both online and at the door for just $5 as part of a home opening ticket special. LSU students will be admitted free with the LSU ID Card and the first 500 students will receive free food from Raising Cane’s.

The game will be streamed on SEC Network+ with Lyn Rollins and Victor Howell on the call. The LSU Sports Radio Network will have the broadcast with (back for a sixth season together) the Voice of the Tigers Chris Blair and former LSU head coach John Brady on the call (Eagle 98.1 FM in Baton Rouge, LSUsports.net/live and the LSU Sports Mobile Apps).

For Coach McMahon and his staff, the hard work started after he was hired as no scholarship players were on the roster. But in some 46 days thanks to the transfer portal, retention and signees, the roster was soon constructed that will take the floor against the Roos. Then the hard work started for the players and staff together.

Through weeks of conditioning and preseason drills, the team prepared for the 30 practices in the last 42 days that set the focus for the season ahead. The values became more evident. The unselfishness of playing as a team. The toughness to keep going play-after-play. The accountability of supporting teammates on and off the floor. And what Coach McMahon hopes to see Wednesday night in the days and weeks ahead – the joy of success as seen by both players and LSU Basketball fans.

“I am excited with (Wednesday) night being the opener of our season,” Coach McMahon said at a Tuesday media session. “We’ve had a great preseason, going to be a work-in-progress as we get started … Spent a lot of time with our players trying to establish the culture that we want for our program, not just this season, but as we move forward as a program. We’re trying to stay locked in on getting continuous improvement from our players and team as we get started tomorrow night. For me, personally, there’s great anticipation and excitement to get to coach our first game here in the PMAC in front of all our great Tiger fans.”

While no official starting lineup has been named it is guessed that the lineup will include two members of the Murray State team that went 31-3 a year ago and 18-0 in the Ohio Valley Conference. Forward KJ Williams was the league’s MVP last year after averaging 18.0 points and 8.4 rebounds and Justice “Juice” Hill is expected to take the point guard spot to open after averaging 13.4 points and 5.1 assists a season ago for the Racers.

Mwani Wilkinson, who has started 44-of-61 career games, returned to the Tigers this season and will certainly play a major role and Tiger fans are hopeful that the will get to see Adam Miller in action for the first time after a devastating ACL injury prior to last season’s first exhibition game.

Kansas City comes in 0-1 on the season after falling 59-56 Monday night to Lincoln (Mo.). The Roos have a new first-year coach in Marvin Menzies, a veteran of the game, with 12-years as a head coach at New Mexico State and UNLV.

This will be the first of a three-game homestand to open the season with LSU hosting Arkansas State on Saturday at 5 p.m. and then UNO on Thursday, Nov. 17, at 7 p.m. Tickets for those games are available at LSUtix.net.