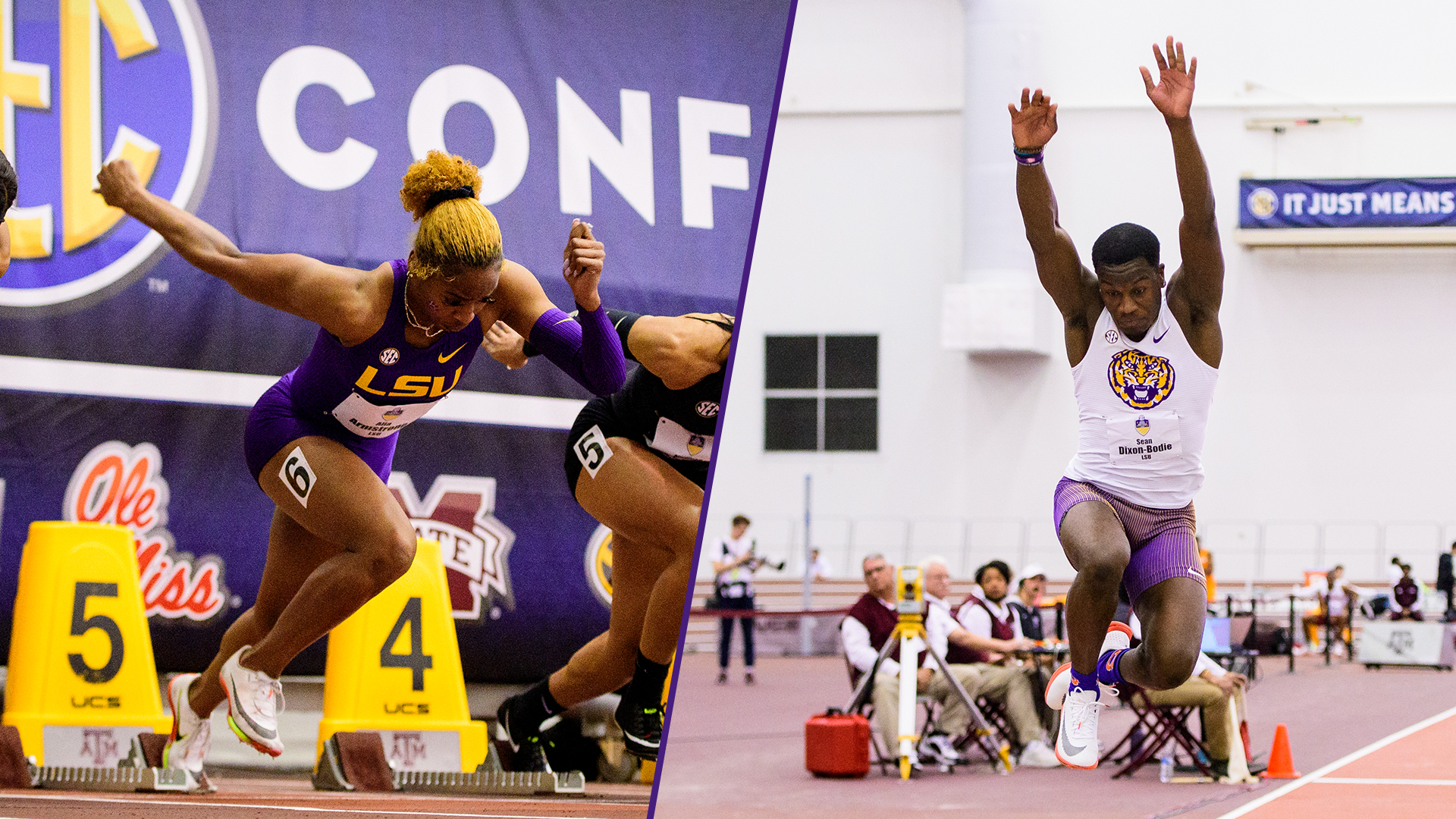 Baton Rouge, La. –  The 2022 indoor collegiate track and field season comes to a close this weekend with the NCAA Championships in Birmingham, Alabama. The two-day meet will be hosted Friday and Saturday at the Birmingham CrossPlex. The LSU women enter the meet ranked No. 4, and the LSU men check in at the No. 19 spot.

LSU will be taking 16 athletes – 11 women, five men – to the national meet with intentions to score as many points as possible; a full competition guide for LSU can be viewed above. Both days of the meet will be streamed on WatchESPN, and a tape delayed broadcast of the meet will air on ESPNU on Sunday at 8:30 p.m. CT. Links can be viewed below.

LSU At The Indoor Championships

LSU has eight individuals headed to the NCAA meet that have previously earned First Team All-America honors. In order to achieve that distinction, an athlete must have had finished in the top eight of their event to score points for the team. The only exception to that rule is 2020 when the U.S. Track & Field and Cross Country Coaches Association announced that anybody who was qualified for the 2020 NCAA indoor meet that got cancelled due to COVID-19 would be named an All-American. Lisa Gunnarsson and Abigail O’Donoghue have earned three All-America indoor honors in their career; Gunnarsson, a pole vaulter, finished first a year ago and fourth way back in 2018 while she competed for Virginia Tech. O’Donoghue has a fourth place finish (2021) and sixth place finish (2019) under her belt in the high jump.

Lisa Gunnarsson enters the meet as the two-time reigning NCAA pole vault champion; she won indoor and outdoor national titles in 2021. Gunnarsson, a native of Paris, France, is looking to become this sixth woman in NCAA history to win back-to-back NCAA indoor titles in the pole vault. She’ll have her work cutout for her as she enters the meet ranked No. 2 nationally this season with a season best clearance of 14’ 9.50” (4.51 meters) back in January. Rachel Baxter of Virginia Tech is the NCAA leader this season with a height of 15’ 1.50” (4.61 meters). Gunnarsson’s clearance of 14’ 11.50” (4.56 meters) that won her the 2021 NCAA indoor title makes her the No. 9 performer in collegiate history in the event. Gunnarsson will compete at 6:45 p.m. CT on Friday night.

LSU hurdler/sprinter Alia Armstrong is gunning to accomplish something that’s never been done at the NCAA indoor meet – win both the 60 meter dash and 60 meter hurdles. Armstrong, who hails from New Orleans, enters the NCAA meet as the top seed in both the 60 meter dash (7.11) and 60 meter hurdles (7.81). Her time of 7.81 in the 60 hurdles that she clocked at the Tyson Invitational a month ago made her the No. 2 performer in collegiate history behind Clemson’s Brianna Rollins-McNeal (7.78/2013). Armstrong will also be going up against Paula Salmon (7.83/No. 3 NCAA history) and Grace Stark (7.86/No. 5 NCAA history) from North Carolina A&T and Florida, respectively. In the 60 meter dash, Armstrong’s 7.11 from the SEC Championships that won her her first career SEC title made her equal to the No. 10 performer in collegiate history in the event. The 60 meter dash, since it’s such a quick race, puts an emphasis on getting out of the blocks quick. Armstrong, the NCAA leader at 7.11, is the favorite over Stark (7.12), Julien Alfred (7.12), and Abby Steiner (7.12). Armstrong will run the 60 meter dash prelims at 7:15 p.m. CT on Friday night before competing in the prelims for the 60 meter hurdles at 7:55 p.m. CT. Assuming she advances, the finals on Saturday night would be at 7:10 p.m. CT (60m dash) and 7:40 p.m. CT (60m hurdles).

LSU’s only scoring opportunity of the meet on Friday will be Gunnarsson in the pole vault. The rest of Friday night’s action will be strictly preliminary rounds with hopes of advancing to the finals. On Saturday, LSU has a guaranteed six scoring opportunities with Abigail O’Donoghue (high jump), Nyagoa Bayak (high jump), John Meyer (shot put), Sean Dixon-Bodie (triple jump) and Apalos Edwards (triple jump) set to compete; the women’s 4×400 meter relay will also have a chance to score Saturday night. The Tigers will plan on advancing several athletes to Saturday’s finals on the track to rack up more points as well.

O’Donoghue and Dixon-Bodie, both All-Americans, enter the meet as the No. 3 ranked competitors in their events. They both registered season bests at the SEC Championships two weeks ago to earn their ranking. Dixon-Bodie’s sixth round leap of 54’ 7.25” (16.64 meters) earned him the SEC title. Favour Ofili, the African record holder in the indoor 200 meters, comes into the national meet with the third fastest 200 meter dash time of the season in the collegiate ranks with a 22.46 that she ran at the SEC meet. It earned her silver and moved her into the No. 9 spot on the all-time collegiate list based on performers.

The final two athletes that enter the meet with top five national marks are Katy-Ann McDonald and Eric Edwards Jr. McDonald ran a career best time of 2:20.85 at the SEC meet to earn that ranking, and Edwards Jr.’s time of 7.60 in the 60 meter hurdles from the Tyson Invitational in mid-February has him slotted fourth. Edwards Jr. won the SEC 60 meter title with a time of 7.64.