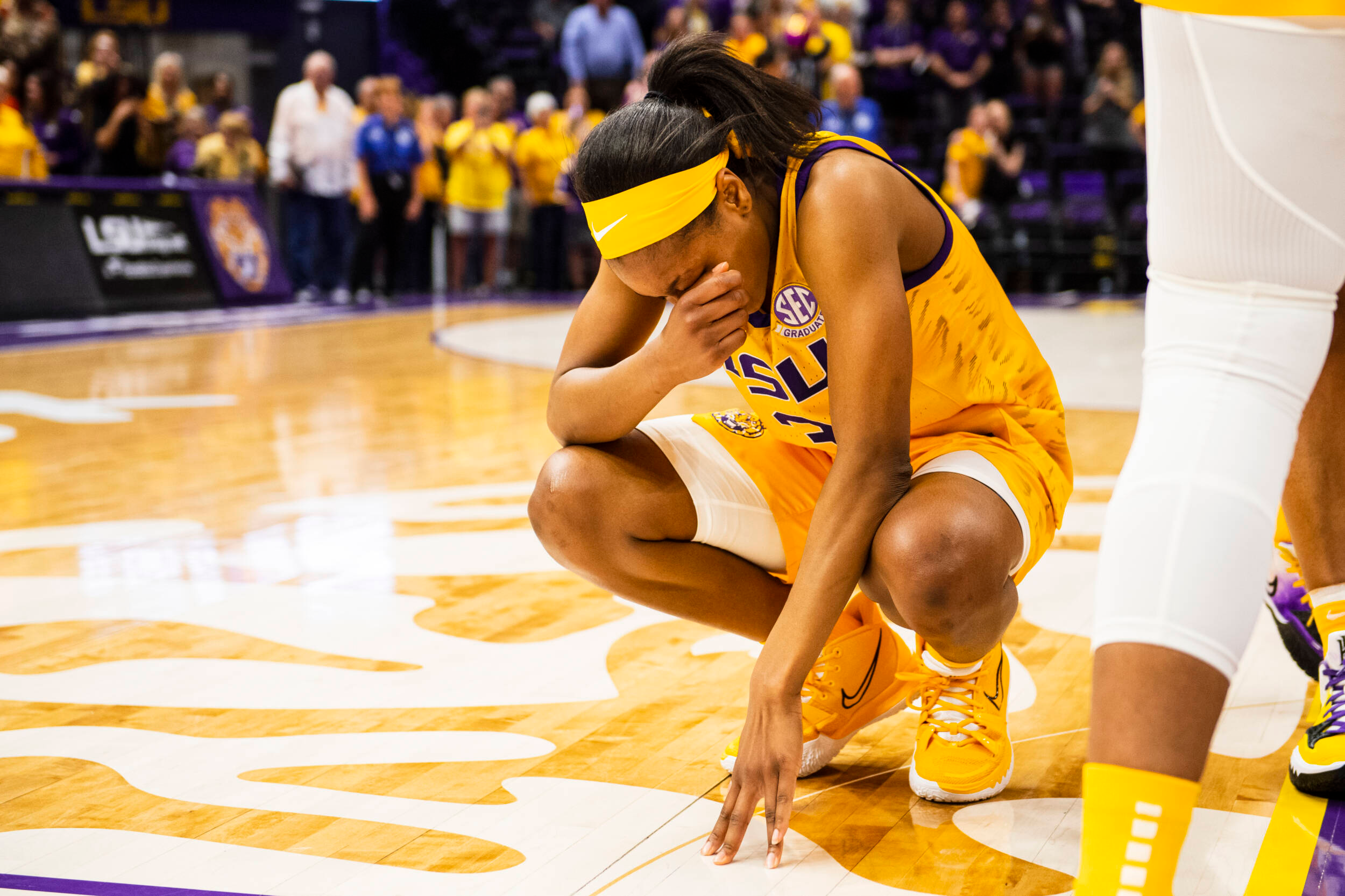 Khayla Pointer took a knee at half court and broke down in tears.

It was after LSU defeated Alabama, 58-50 on senior night, to clinch at least a share of second place in the SEC, that the raw emotion poured out.

Pointer, like many of these seniors, has experienced it all as a student-athlete over the last five years: Tragedy in its greatest form with the loss of her father, leaving her sketptical about her love for the game. Adversity on the floor, winning just nine games her junior year. To Friday night, leading the No. 8 team in America off the floor with a 24-4 overall and a 12-3 record in conference.

Perseverance personified. That moment was her moment, and nobody deserved it more than KP.

Over near the scorer’s table was head coach Kim Mulkey, offering personally thank yous to each fan. If you know Mulkey, you know she didn’t skip a single person. Not one. Sure, a press conference awaited, but that wasn’t of immediate concern. The fans were.

Four seniors stood at half court, anxiously waiting for Cherry, who was crying with her family under the hoop on the west side of the PMAC. Once Cherry gave her last hug to her parents, the five seniors embraced as a group at center court in front of the fans who stuck around.

Not a dry eye was left in the building. A special season at home culminated in a special night. And it shouldn’t be over just yet.

“For me, it was special,” Pointer added. “I’ve been one to be where my feet are, all season. It didn’t really hit me until halftime when I walked out with my family, with my Dad on my right side and my Mom on my left.

Pointer’s Dad’s side of the family surprised her. She didn’t know they were coming Thursday night. That’s when everything hit her. Walking out of the tunnel with a photo of her father in her right hand, and her mother to her left, the emotions couldn’t be held in any longer.

Adversity is no stranger to his team. Ryann Payne broke her nose in practice yesterday, forcing her to wear a mask on her face during the game. Team leader Alexis Morris went down with a leg injury in the first quarter. But, like this team always does, they weathered the storm.

That’s what amazes Mulkey about this group. They don’t get to high, they don’t get too low. That’s a team with great leadership. That’s this 2021-22 LSU team.

“The emotions really started, from what I could see, after the game,” Mulkey said. “It’s like you’re tired. You gave it everything you had. The fans stayed. The video is going. Your seniors take a lap around the court. That’s when the tears started flowing.”

With the win, the Tigers clinch at least a share of second place in the conference, with a chance to claim the two-seed in the SEC Tournament outright with a win on Sunday at Tennessee.

A lot still remains at stake. The opportunity to host as a top-16 seed. The chance to finish in second place outright in the SEC. The hope to make a deep run into March. But as Year 1 of the Mulkey Era rounds the corner, it would be hard to not take it all in, think about how far this program has come in just eight months, and feel really positive. The fun is just beginning.

“We’re No. 2,” Mulkey said. “Y’all write that. You are guaranteed a second place finish in this league. Make that your headline. Do you understand this team won nine games last year and they just finished behind the No. 1 team in the country? What a year it’s been.”

These seniors have clinched at least a share of second place in the SEC! pic.twitter.com/1lAm2Gwrjn

It’s fitting that on Senior Night Pointer would perform at her best. LSU’s leader tallied 23 points, nine assists and eight rebounds, just shy of her second triple-double of the season. Aifuwa posted an efficient night, recording 12 points on 5-of-7 shooting, adding five boards.

Mulkey will be always forever grateful for this senior class. They bought in from the day she touched down at Baton Rouge Metro Airport wearing a purple jacket and an LSU pin. They stayed when it could’ve been convenient to leave.

The program, Mulkey says, hasn’t arrived yet on the national scale. You need consistent winning in order to say that. But the future, both near and long term, couldn’t be brighter, and these seniors are a big reason why.

“They kickstarted what we hope to continue in the future,” said Mulkey. “They brought the interest back to this program.”