JuVaughn Harrison – Finalist For The Bowerman 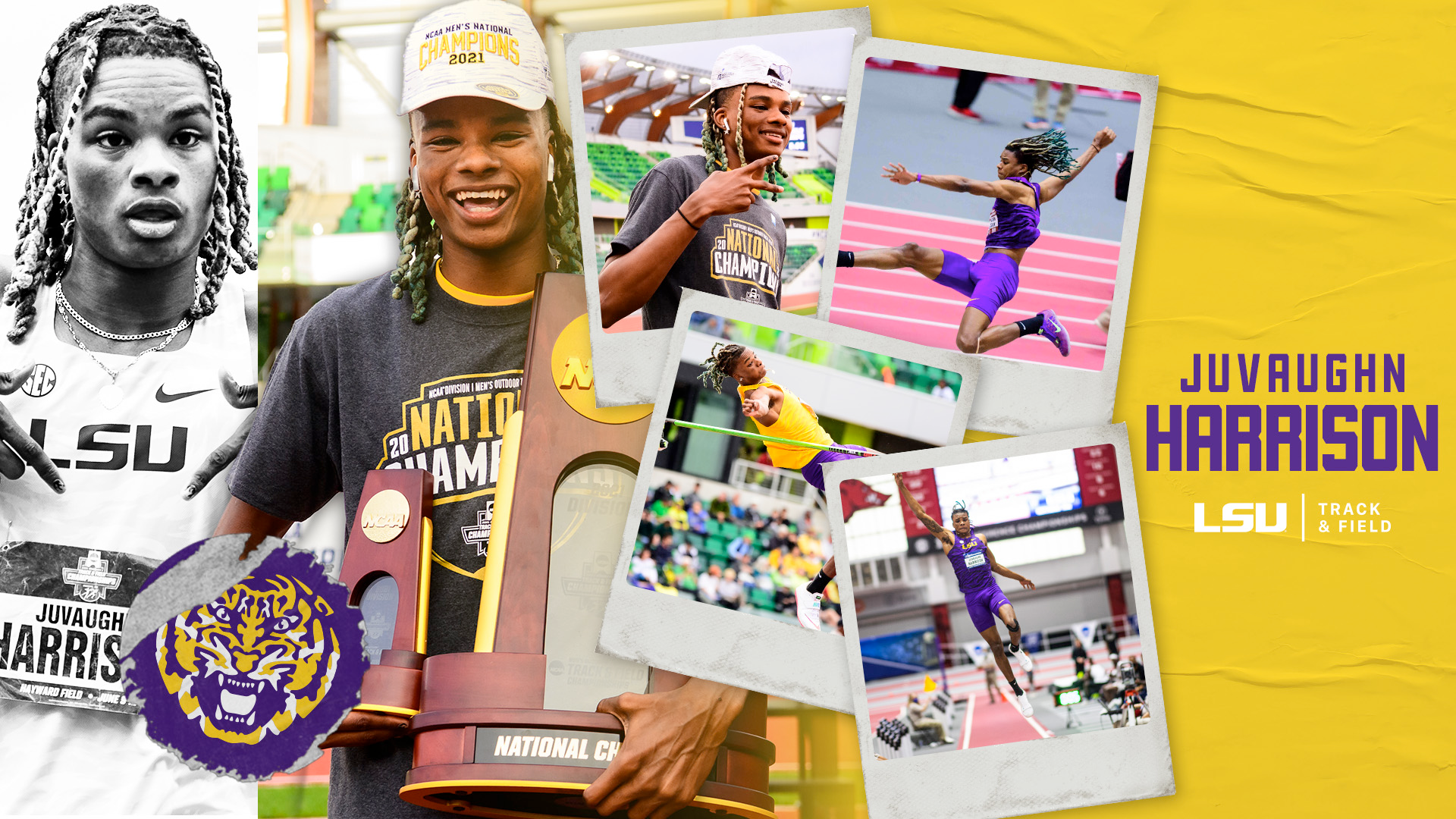 Baton Rouge, La.  – JuVaughn Harrison will look to become the first male in LSU track and field history to win The Bowerman on Friday night in Orlando, Fla., at the Grande Lakes Resort. Harrison is one of three finalists alongside Oregon’s Cole Hocker and Arizona State’s Turner Washington.

LSU has had two previous winners of the most coveted award in collegiate track and field, also known as The Bowerman. Sha’Carri Richardson won it in 2019, and Kimberlyn Duncan was the first LSU winner of the award in 2012.

Harrison did some things this season that the track and field world has never seen in its history. His mastering of the long jump/high jump double was a spectacle to see throughout the whole season as he became a recognizable name worldwide thanks to his jumping exploits. He won four NCAA titles, led LSU to a team national title outdoors, won three SEC titles, and compiled a record of 14-2 in 16 total events. He’s also the LSU school record holder in four events – indoor long jump, outdoor long jump, indoor high jump, outdoor high jump.

2021 ‘JuVaughn’s World’ Moments
Harrison’s first double of the year came at the 2021 SEC Indoor Championships. It was February 26 in Fayetteville, Ark., when he cleared a pedestrian bar of 7’ 2.50” (2.20 meters) to win his third straight conference title indoors in the high jump. That event started at 12 p.m. before the long jump was set to get going at 1:45 p.m.

“The high jump was a good, smooth start for me today,” Harrison said. “Coming into the event, I knew I had two events on the schedule so I was trying to be as efficient as I could be. It meant a lot to me (to win third straight SEC title) and after I cleared that last bar my focus was on to the long jump.”

Harrison recovered quickly and went out and broke the SEC meet record in the long jump with a bound of 27’ 4” (8.33 meters) for his second title of the day. At the time, that was the best mark of his career in the long jump and it marked his first SEC long jump title. Harrison was given the Cliff Harper Trophy for earning High Point Scorer honors at the SEC indoor meet.

Harrison returned two weeks later to the Randal Tyson Track Center with the same expectation to sweep titles again, this time though, on the national stage. March 12 was the day that history happened as Harrison pulled off the most impressive high jump/long jump combo in world history within the span of three hours.

Harrison had a bit more competition at the NCAA meet, but that was a good thing. It pushed him and he knew he had to bring his best, and he had a chance to avenge his only loss of the indoor season in the long jump to Florida State’s Isaac Grimes.

Harrison went up and over a final bar of 7’ 6.50”(2.30 meters) to set a personal best in the high jump as he defeated Earnie Sears (USC) and Tejaswin Shankar (Kansas State) for the first national title of his day. This event blended right in to warm ups for the long jump just a little over 15 minutes after the conclusion of the high jump.

Through the first three rounds of the long jump, Harrison found himself in fourth place, but he knew had three attempts left to climb the leaderboard. It was his round five attempt where he launched himself 27’ 8.75” (8.45 meters) to take a commanding lead in the event; that mark would stand as the top of the day and he beat the runner up, Grimes, by four inches that day to avenge his only defeat of indoors.

His performance on March 12 was impressive enough to earn him the No. 1 spot on SportCenter’s Top 10, and it had the sport of track and field buzzing. Hence the nickname Mr. Jumps was born.

Top Performance of the Day

Billboards are up around Baton Rouge!!

Harrison took almost a month off before he made another splash outdoors. His first big performance of the outdoor season came on April 24 at the LSU Alumni Gold in the long jump at Bernie Moore Track Stadium. It was a fourth round leap of 27’ 8.25” (8.44 meters) that shot him up to the No. 6 in the collegiate record books outdoors.

A week later he followed up with an outdoor personal best of 7’ 6.50” (2.30 meters) in the high jump at the LSU Invitational to conclude his outdoor regular season unblemished.

@jaay_jumps clears 7' 6.50" (2.30 meters) for the LSU school record and 2021 NCAA lead! It's the third best clearance in the world this year.#GeauxTigers pic.twitter.com/ubCa1m2cnm

May 14 is a day that many high jump enthusiasts won’t ever forget as Harrison put on an absolute show in the high jump to win the SEC outdoor title. Dubbed as the ‘Immaculate Performance’, Harrison entered the competition at a height of 7’ 1.50” (2.17 meters) and proceeded to clear seven straight attempts en route to a winning height of 7’ 8.75” (2.36 meters).

It upped his previous school record, made him the No. 2 performer in collegiate history, and got him the Olympic standard. It was the sixth SEC title of his career, set the SEC meet record, and was the seventh best clearance by an American outdoors. The performance had the world of athletics talking about Mr. Jumps as it reached nearly two millions views across all social platforms.

Harrison travelled to Eugene, Ore., with a couple things on his mind – win two individual titles and bring home a team title for LSU. This time though, he’d have a chance to rest in between events with the long jump scheduled for Wednesday (June 9) and the high jump set for Friday (June 11).

It was just less than 48 hours later when Harrison closed out his collegiate career with another NCAA title, this time in the high jump. He went up and over a height of 7’ 7.75” to complete the NCAA outdoor double in the high/long jump for the second time in his career. He even raised the bar to a what would have been a collegiate record height of 7’ 10” (2.39 meters), but was unable to clear that in three tries.

A final record of 14-2 on the season and four individual national titles while pulling off an unprecedented double has put Harrison in prime position to win the most sought after award in collegiate track and field. Harrison was named the USTFCCCA Men’s Field Athlete of the Year both indoors and outdoors, and he swept the same awards in the SEC as well.

The Bowerman committee only takes into question the performances from the collegiate track and field season. So to clarify, his performances at the U.S. Olympic Trials and Tokyo Olympics do not count for this award, but we will still mention them. Harrison, once again, completed the high jump/long jump sweep at the U.S. Olympic Trials at the end of June to secure his first bid to the Olympics. He won the long jump title with a career best leap of 27’ 9.50” (8.47 meters).