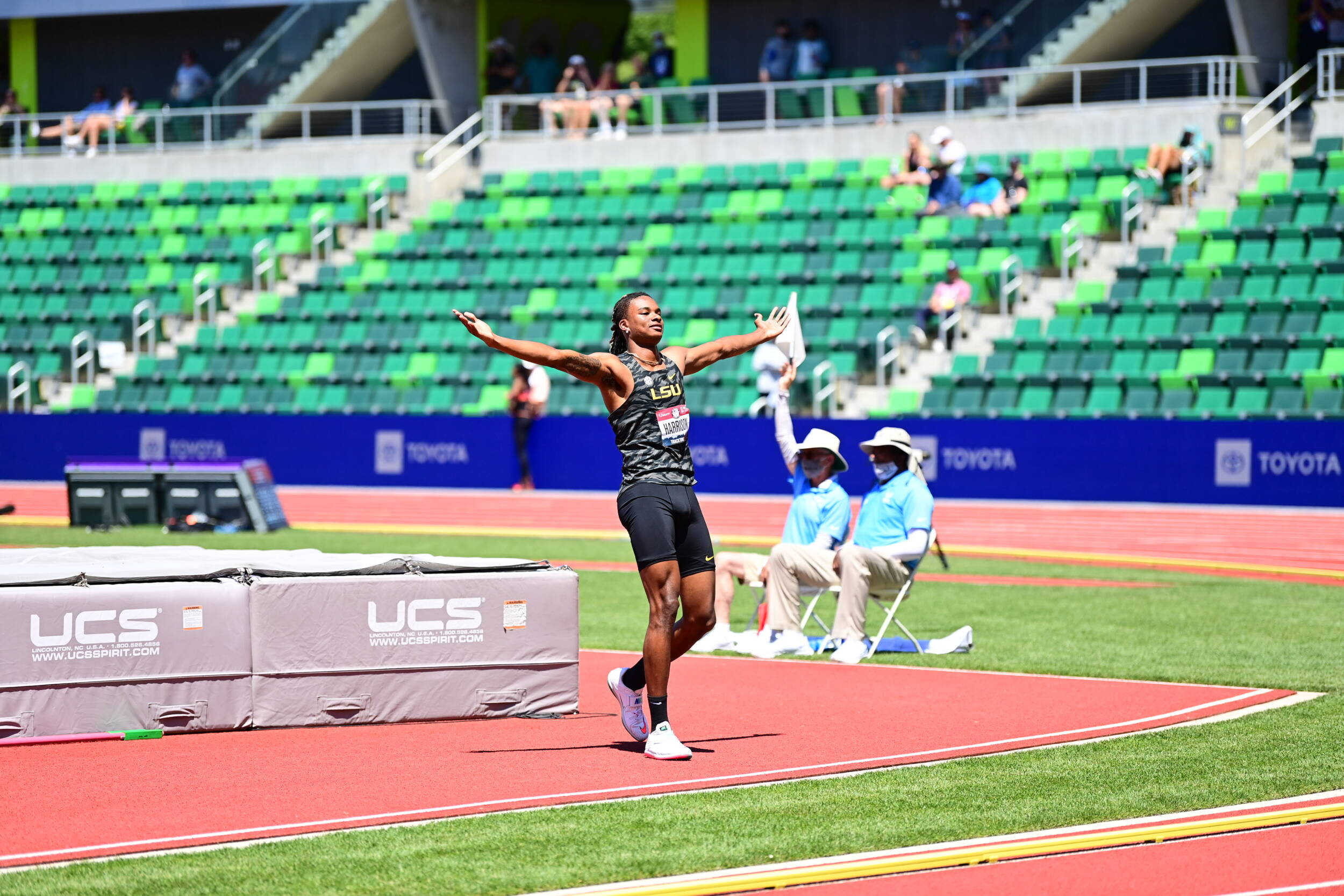 Baton Rouge, La. – It’s official. JuVaughn Harrison, aka Mr. Jumps, is headed to the Tokyo Olympics. Harrison won two U.S. titles on Sunday at Hayward Field to close out the U.S. Olympic Trials. He won the high jump with a clearance of 7’ 7.75” (2.33 meters) in the afternoon, and returned to competition as the victor in the long jump about six hours later with a career best long jump of 27’ 9.50” (8.47 meters).

Harrison’s performances just keep getting more and more impressive as wild as that sounds. He hasn’t lost a high jump competition since March 30, 2019, aka 821 days ago. That includes 15 straight competitions in the high jump that he hasn’t been beaten. And then to the long jump, he glided out to a PR of 27’ 9.50” (8.47 meters) to cap the meet off; that mark matches the LSU school record that was set by 2004 Olympic silver medalist, John Moffitt.

What fans saw at Hayward Field on Sunday may never be seen again at the U.S. Olympic Trials. Well, that is, until JuVaughn competes again. Nevertheless, Harrison keeps on raising the bar for what he can accomplish. He’s by and far the best jumper in LSU history with six NCAA titles and now two U.S. titles under his belt. You can also make the argument that he’s the best jumper in NCAA history after what he has done at the last three NCAA Championships where he has swept the long jump and high jump titles. The last man to do that? No one. It’s literally been done by JuVaughn at three straight meets, but no other competitor in NCAA history has ever done it before him. And next, he’ll take his talents to Tokyo with solid chances to be in contention and win both events.

Asked after his performances on Sunday what his goal was for Tokyo. He replied with, “I’m going there with the goal of winning both events. I don’t like to lose.” And after you look at where he ranks on the world list this year in both events – No. 2 in each the high jump and long jump – you can see why he has that supreme confidence.

After about a six hour gap in between the conclusion of the high jump in extreme heat and the start of the long jump at 8:30 p.m. PT/10:30 p.m. CT, Harrison was rejuvenated enough to go out and win another title. He started the event off with an early leading mark of 27’ 0.50” (8.24 meters) with his first round jump. Marquis Dendy took over the lead in round two with a leap of 27’ 6” (8.38 meters), but Harrison was quick to respond.

It was his third round and personal best leap of 27’ 9.50” (8.47 meters) that wound up winning him the event with the second best mark in the world this season. None of his final three tries bettered his third round mark, but he didn’t need it.

It was an absolute scorcher on the track during the competition and temperatures were up to 104 degrees Fahrenheit towards the end of the high jump competition. The event was eerily similar to the SEC high jump competition that took place outdoors between Harrison and Tennessee’s Darryl Sullivan as both men went head to head with each other.

That’s when the USA Track & Field announced that the meet was postponed for several hours due to rising temperatures. It was around 105 degrees when the decision was made to postpone competition until later Sunday evening. So now, Harrison will compete in the long jump at 10:30 p.m. CT/8:30 p.m. PT with hopes of locking up his second bid to Tokyo. If he does so, he would become the first man since Jim Thorpe (1912) to compete in the both the long jump and high jump at the Olympics. Thanks for the heads up tip from Paul Swangard.

The win in the high jump also made JuVaughn the first man since John Thomas (1960) to win the NCAA outdoor title and U.S. Olympic Trials title in the same year.