Deion Smith put Tiger Stadium on notice Saturday — but it was nothing the coaching staff hadn’t seen before. 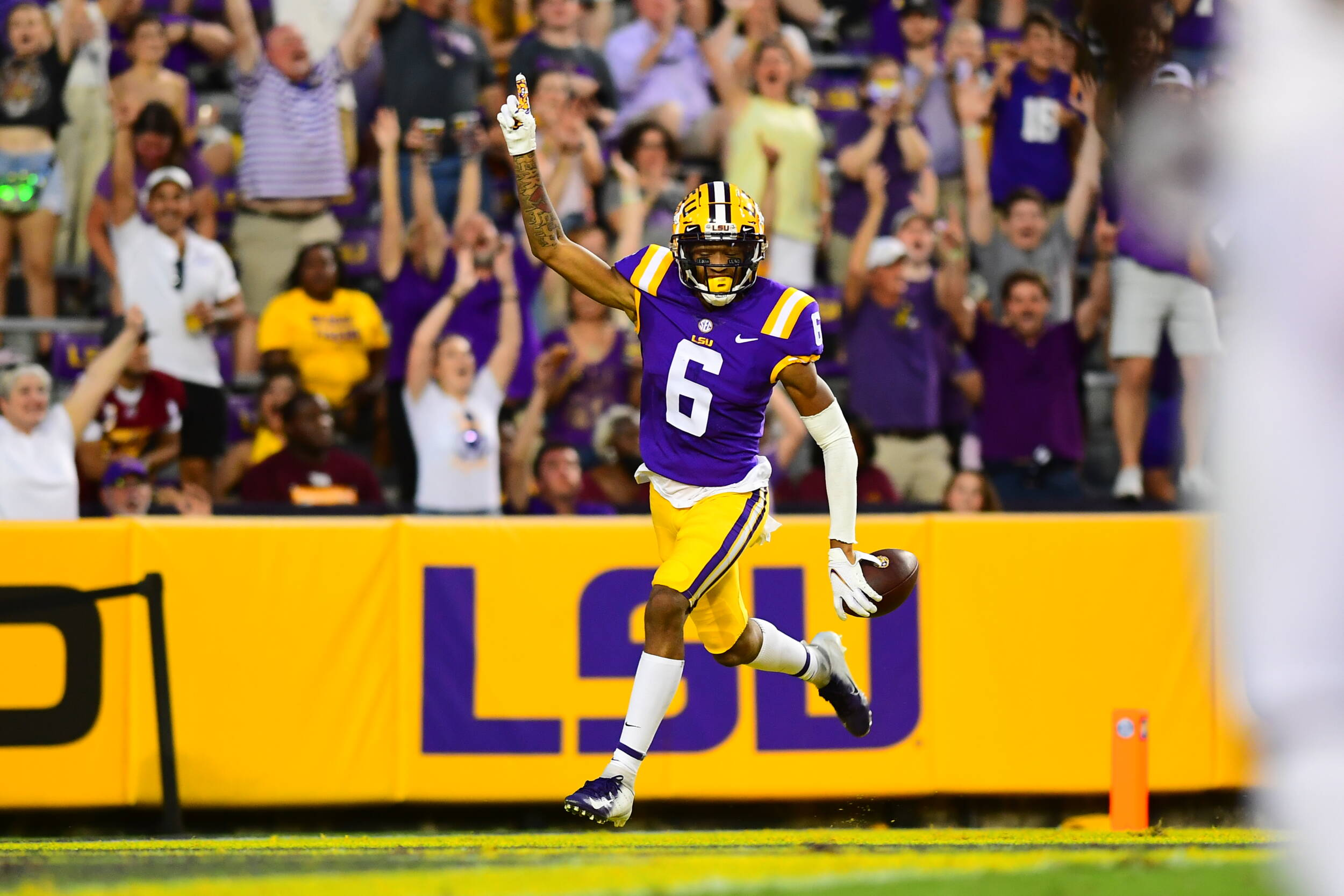 Deion Smith put Tiger Stadium on notice Saturday — but it was nothing the coaching staff hadn’t seen before.

In fact, his breakout night, which culminated with two touchdowns and 135 yards receiving, was a performance head coach Ed Orgeron knew Smith had in store all along.

“It was fun seeing him do it in Tiger Stadium,” Orgeron said on Smith. “I’ve been seeing it all the time in practice.”

Tempo was a buzz word all week. LSU’s offense wanted to go fast, and it was the freshmen that fast-tracked their success.

Smith was one of many ahead of the curve, scoring two touchdowns in the first quarter, finishing with five receptions in LSU’s 49-21 win over Central Michigan.

Albeit a small sample size, it’s the route running ability, the hands, the body control and the explosiveness that has Orgeron drawing comparisons to Justin Jefferson.

“He reminds me of Justin Jefferson in a lot of ways,” Orgeron said of Smith after the game. “Good route runner, great body control, can catch the ball. He’s big and he’s got great hands.”

Fast football requires fast learners — something that best describes Smith and freshman wideout Jack Bech. Bech has solidified himself as one of Johnson’s go-to targets, recording five catches for 81 yards and a touchdown, a one-handed snag in the back of the end zone for his first score of his LSU career.

“It was a perfect ball right where it needed to be,” Bech said. “The defender was holding my left hand, so I had to go up with one. I did a little shake and bake and made it work.”

In the running game, freshman Corey Kiner can do many things: he can make you miss, he can run you over, or in Saturday’s case, he can do both. The 5-foot-10, 210-pound back tallied 74 yards and a touchdown on 12 carries, providing LSU’s rushing attack with a spark.

Orgeron sees similarities to Clyde Edwards-Helaire, not necessarily on the field, but in Kiner’s attitude, emphasizing that despite his size, when walks into a room he’s someone who commands your attention.

“It gives us an identity,” Orgeron said on Kiner. “He’s a strong runner. He can break tackles, run inside, run outside — he’s got a spark about him.”

The Tigers wanted to bring some juice on Saturday night, and it didn’t take long to make some juicy plays.

Smith executed his best Randy Moss impression for his first touchdown, jumping over the defender and showcasing his athleticism to make the catch and secure the score. It was a tone-setter, and the Tigers never looked back.

“We brought some up-tempo and some warps to get the guys going, to bring some juice,” said quarterback Max Johnson. “We took some shots. We have a lot of great athletes that went up and got it for us.”

Johnson became the third quarterback in LSU history with five-plus touchdown passes in a game, joining Joe Burrow and Zach Mettenberger, capping off a career night for the sophomore. His confidence, both in his teammates and his coaches, continues to grow with each game.

“I’ve grown a lot of confidence as well in Coach Peetz,” Johnson said. “I think he’s done a great job of calling the game. I’m looking forward to coming back to work this week.”

The defense hoped it could build on last Saturday’s performance against McNeese, and they did that and more. Derek Stingley Jr. posted his best performance of the season with four tackles and a forced fumble that was scooped up and returned for a touchdown by senior Andre Anthony.

19 Tigers recorded a tackle, with Damone Clark, Bugg Strong and Micah Baskerville leading the charge with six a piece. Not many tackles in space were missed.

“I’m proud of how the defense played today,” Clark said on LSU’s defensive performance. “I’m excited about our effort — how we flied to the ball — just relentless. We have a few things to correct, but we’ll get it fixed.”

Orgeron said on Thursday that the team had five spirited practices leading into Saturday’s contest, a sign of something to come, which translated into a complete win filled with contributions all over the stat sheet.

With SEC play on the horizon, Saturday’s performance can be a springboard for the Tigers in the road ahead.

“I think we took the next step,” Orgeron said on Saturday’s win. “We’re not there yet. We identified some things that we had to get done tonight — that we did — and we’re going to go back with the same attitude next week.”