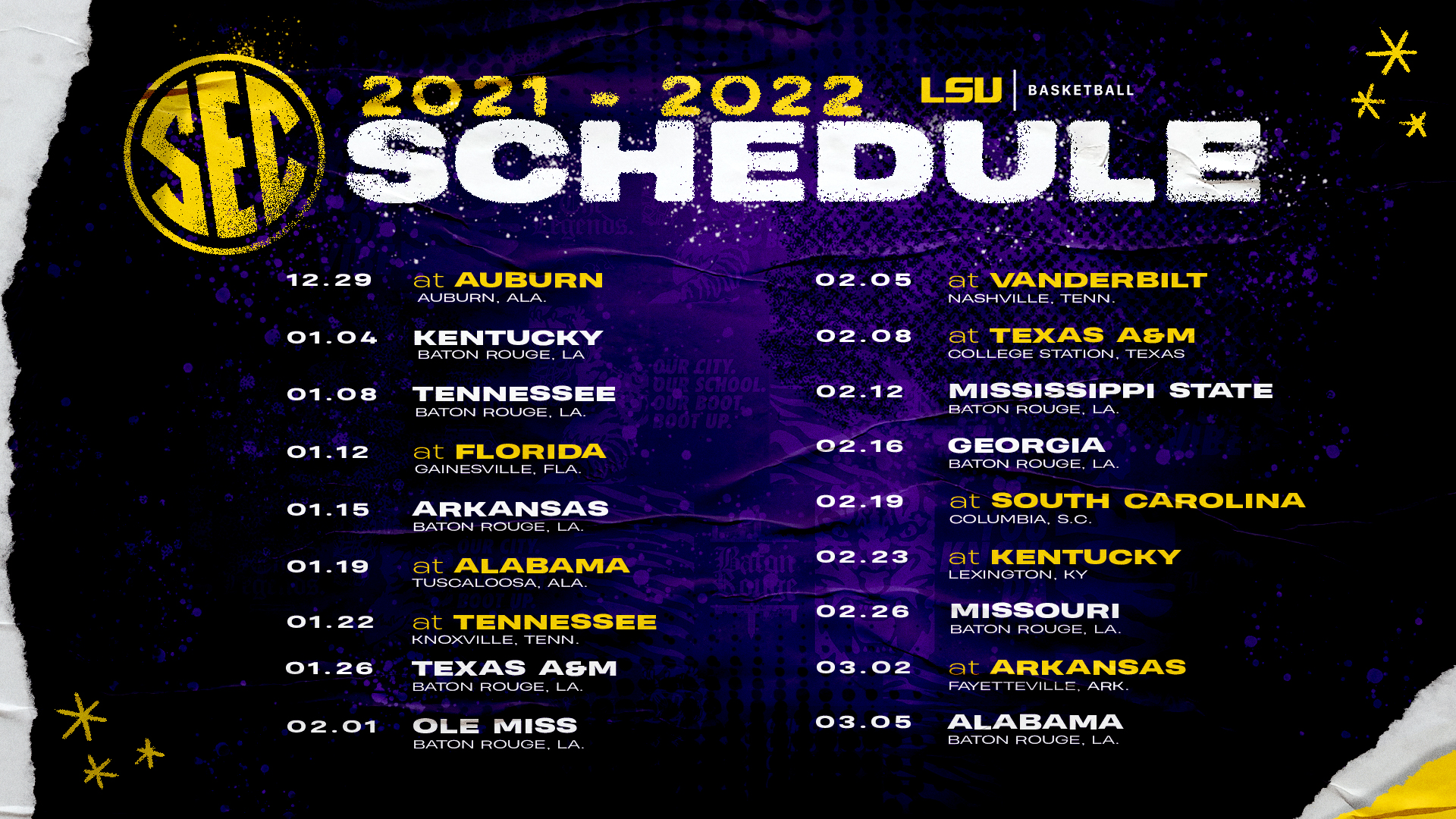 BATON ROUGE – The Southeastern Conference on Thursday announced the 18 playing dates for its 14 teams, with LSU scheduled to start the 2022 portion of the season with back-to-back home games against Kentucky and Tennessee.

Overall, LSU will play 17 home games, and including 10 games against the seven other schools that advanced to post-season tournament play, LSU has the potential for 18 games against teams that continued play into mid-March in 2021.

Season ticket information for the 2021-22 season is available through the LSU Athletics Ticket Office and online at LSUtix.net. Season tickets begin at $100.

The Tigers of Coach Will Wade, who will be in his fifth year as the head coach in Baton Rouge, will face Kentucky on Jan. 4 for the SEC home opener. On Saturday, Jan. 8, the Tigers will play Tennessee at the Pete Maravich Assembly Center.

Kentucky and Tennessee will join the usual trio of Alabama, Arkansas and Texas A&M as the teams LSU will play both home-and-away during the upcoming season.

The Southeastern Conference men’s basketball tournament will take a one-year trip from Nashville and will be held in Tampa, March 9-13, at the Amalie Arena.

Previously announced was LSU’s non-conference schedule that features eight home games and includes a road trip on Jan. 29 to TCU as part of the SEC/Big 12 Challenge. The Tigers will also take place in the Emerald Classic in Niceville, Florida against Penn State and either Oregon State or Wake Forest. LSU will also play in the nationally televised Holiday Hoopsgiving in Atlanta on Dec. 11 against Georgia Tech.

The Tigers will open the 2021-22 season with five home games in 14 days starting with a Nov. 9 game against ULM and a game on Friday, Nov. 12 against Texas State. That game will be played on the eve of LSU’s home football game on Nov. 13 against Arkansas in Tiger Stadium.

The other games in the opening stretch of games include Liberty on Nov. 15, McNeese State on Nov. 18 and Belmont on Nov. 22 before heading to Northwest Florida for the two games.

The December schedule includes a neutral site game in Bossier City as LSU will take on Louisiana Tech on Dec. 18 at the Brookshire Grocery Arena.