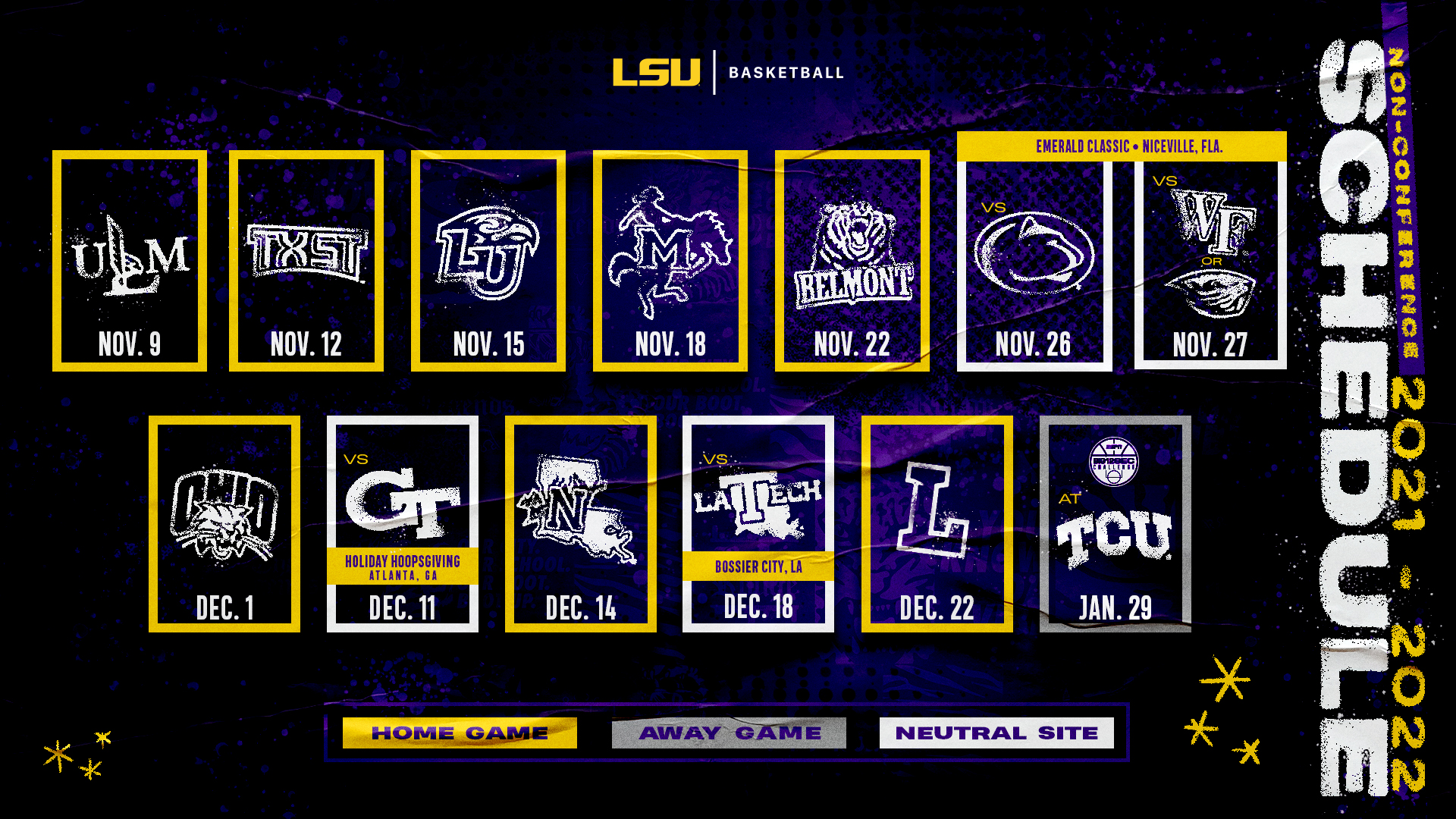 BATON ROUGE – LSU will play eight November and December men’s basketball games at the Pete Maravich Assembly Center as part of a 13-game non-conference slate announced by the basketball program and the athletics department on Friday.

LSU will also play nine home Southeastern Conference games with dates to be announced by the league at a later date. Season ticket information can be found at LSUTix.net.

The Tigers will potentially play five teams that advanced to post-season play a season ago and seven teams that won at least 17 games on their 2020-21 season schedule.

Liberty won 23 games and advanced to the NCAA Tournament in 2021, while Belmont posted a 26-4 record a year ago. The McNeese game is scheduled as part of the Emerald Classic in Niceville, Florida, which LSU will be participating over Thanksgiving weekend.

LSU will play Penn State on Friday, Nov. 26, in the Emerald Classic, which will be played at Raider Arena at Northwest Florida State College. LSU will either play Wake Forest or Oregon State on the second day of the tournament, Nov. 27. Oregon State won 20 games a season ago and advanced to the Elite 8 before falling in the NCAA Tournament.

Ticket information on the Emerald Classic is expected to be announced later this month.

LSU will open December with another NCAA tournament team, Ohio, on Dec. 1 at home before the school’s final exam break.

The Tigers are back in the Holiday Hoopsgiving event at State Farm Arena in Atlanta and will face Georgia Tech, a team that also made it to the NCAAs last season. LSU was scheduled to play in this event last year, but the game had to be postponed at the last minute because of COVID-19 protocols.

The Tigers will return to Louisiana for two games against state schools with LSU hosting Northwestern State on Dec. 14 at the Maravich Center before traveling to the Brookshire Grocery Arena in Bossier City to face Louisiana Tech. This will be the fourth straight season the teams have met in either a regular season game or a charity exhibition contest.

LSU will be playing in Bossier City for the first time since 2010. Tickets for that game are available now at www.ticketmaster.com. For tickets in the LSU section, fans can use the code “geauxtigers.”

The pre-Christmas conference schedule concludes on Dec. 22 against Lipscomb.