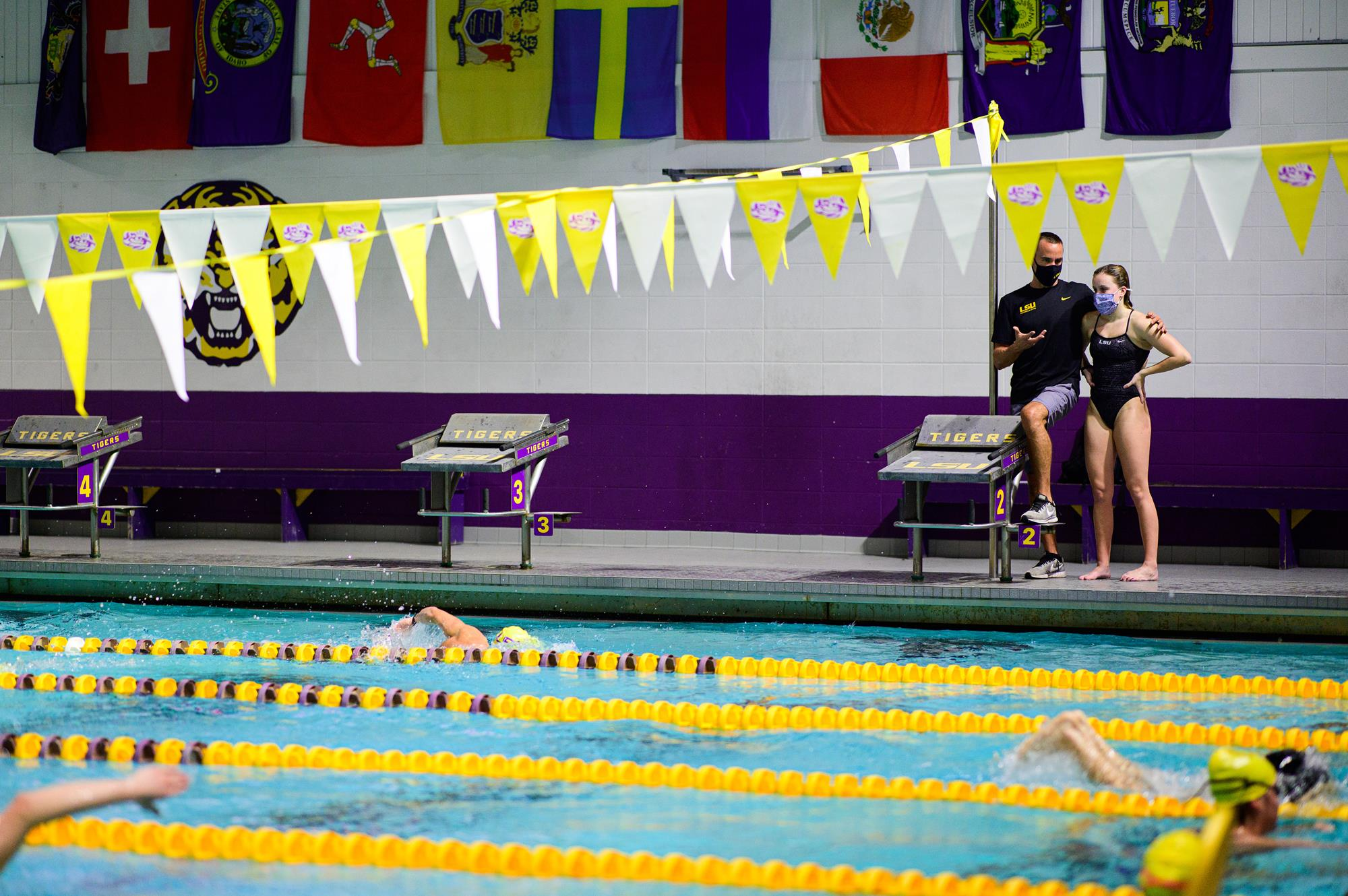 Dave Geyer tried his best to be farsighted, to look ahead and think positively despite a summer filled with obstacles.

The focus remained on February, otherwise known as championship season for SEC Swimming and Diving. With LSU gearing up for its first meet on Friday, that road to February begins at the Natatorium in 24 hours against Alabama.

Geyer anticipated a difficult eight months to get to this point. There were tons of unknowns and a lot of hurdles to jump over. But, admittedly, he didn’t think it would be as difficult as it’s been.

With many of his student-athletes spread out across the globe, the level of training varied over the offseason. Some had access to a pool as early as March, while others struggled to find any access at all. The single biggest challenge has been making sure everybody is on a level playing field, as best they can, ahead of Friday’s opening meet.

“You can’t slow them down for the rest to catch up,” Geyer said. “But you can’t speed up the other ones. It’s managing everyone individually, while still trying to keep that team training environment moving.”

He also realized that regardless of those obstacles, it shouldn’t change the expectations for the program. The expectation to perform at the highest level will always be there. The good news is he returns a bulk of last year’s production to do that, starting with SEC Champion Brooks Curry and SEC All-Freshman Team honoree Niamh Robinson.

What a year it was for Brooks Curry!

Take a look back at how he became the fastest freshman in the country, by @HValentineLSU.#TheLSUWay

Curry finished the 2019 season as the fastest freshman in the country in all three freestyle events. The scariest part? He’s got unfinished business.

His goal before the season was to make it to NCAAs, something he achieved, but never got to experience due to coronavirus cancelations. The goal remains the same in 2020. For Curry, the preparations for this season have been a lot of work and one of the most challenging periods of his swimming career.

“It was a huge challenge going from 12 workouts a week to four,” said Curry. “That was the max we could do for the summer. It was hard not having a consistent schedule. Coming back to practice now has been great. Mentally, it’s really good to be back and swimming every day.”

“I’ve been working the hardest I have my whole life this year,” Curry added. “Looking toward to the goal of going to Tokyo [2020 Summer Olympics]. Training the way I am right now, hopefully I can prepare myself for that opportunity.”

At LSU’s virtual end-of-year awards in April, Curry took home Newcomer of the Year, Most Improved Male, Hammer Award, and Most Valuable Male. Take what you want from that: he’s just getting started. In fact, Coach Geyer thinks the sky is the limit in terms of his potential.

“I don’t like putting ceilings on athletes,” Geyer said. “Brooks can go as far as Brooks is willing to commit in this sport, and that’s a growth and maturation process for him. Sometimes he does that stuff on his own. Sometimes we need to hold his hand a little bit. But when he tells us stuff that he wants to do, we hold him to the standard that we believe that needs to be.”

With spots of proven success in 2019-2020, LSU has been asking themselves this question lately: what’s next? The next step is building on last year. They took steps forward, but they don’t want to take any steps back, and Geyer says a total buy-in is needed for the team to go where he thinks they are capable of going.

“To be more successful, we need that next level down to really step up,” Geyer said. “To continue to buy in to the training and the atmosphere and look at those leaders that have performed at the high level and model themselves after them. I think if we can have a handful more do that this year, we can be just as successful with maybe less people.”

Similarly to Geyer, for Diving Coach Doug Shaffer, the optimism has been looking forward. The divers also return production, but also add some talented newcomers. He mentioned Montserrat Gutierrez Lavenant and Helle Tuxen in particular as two names to keep an eye on this season.

“We’ve done it with the addition of Montserrat [Gutierrez Lavenant] and Helle [Tuxen],” said Shaffer on his impact freshman. “We really did have a successful championship season heading into NCAAs. I’m hopeful we have the opportunity to compete in our championship season and give our student-athlete a chance to represent and show what they’ve been working on.”

Juan Celaya-Hernandez is back on the boards for his senior year and will be a staple for the Tigers. Winning 18 of 24 events, gold and bronze medals at the SEC Swimming and Diving Championships, Celaya-Hernandez was named an NCAA All-American in 2019. He was pretty straight-forward when discussing the struggles of this offseason: it’s been the hardest of his career. But according to Shaffer, his work ethic is something that never wavers, no matter the circumstances.

“He’s sets the standard and that’s what sets him apart,” Shaffer said. “He’s unfaltering in terms of his focus and his direction for what he wants to accomplish. It shows every single day.”

“This offseason was the biggest challenge of my athletic career,” said Celaya-Hernandez. “Nothing compares to it. I was focused on doing what I could, conditioning-wise.”

There’s no time to be farsighted anymore. The season is one sleep away. The obstacles were weathered, and in the end, the offseason may have brought the team closer together.

“I really enjoy how the team chemistry is right now,” Celaya-Hernandez added. “Divers and swimmers are getting along better than usual. There’s more communication between us and we’re tighter than we’ve been and I’m really excited to be back competing.”