LSU Bounces Back with 41-7 Victory at Vanderbilt 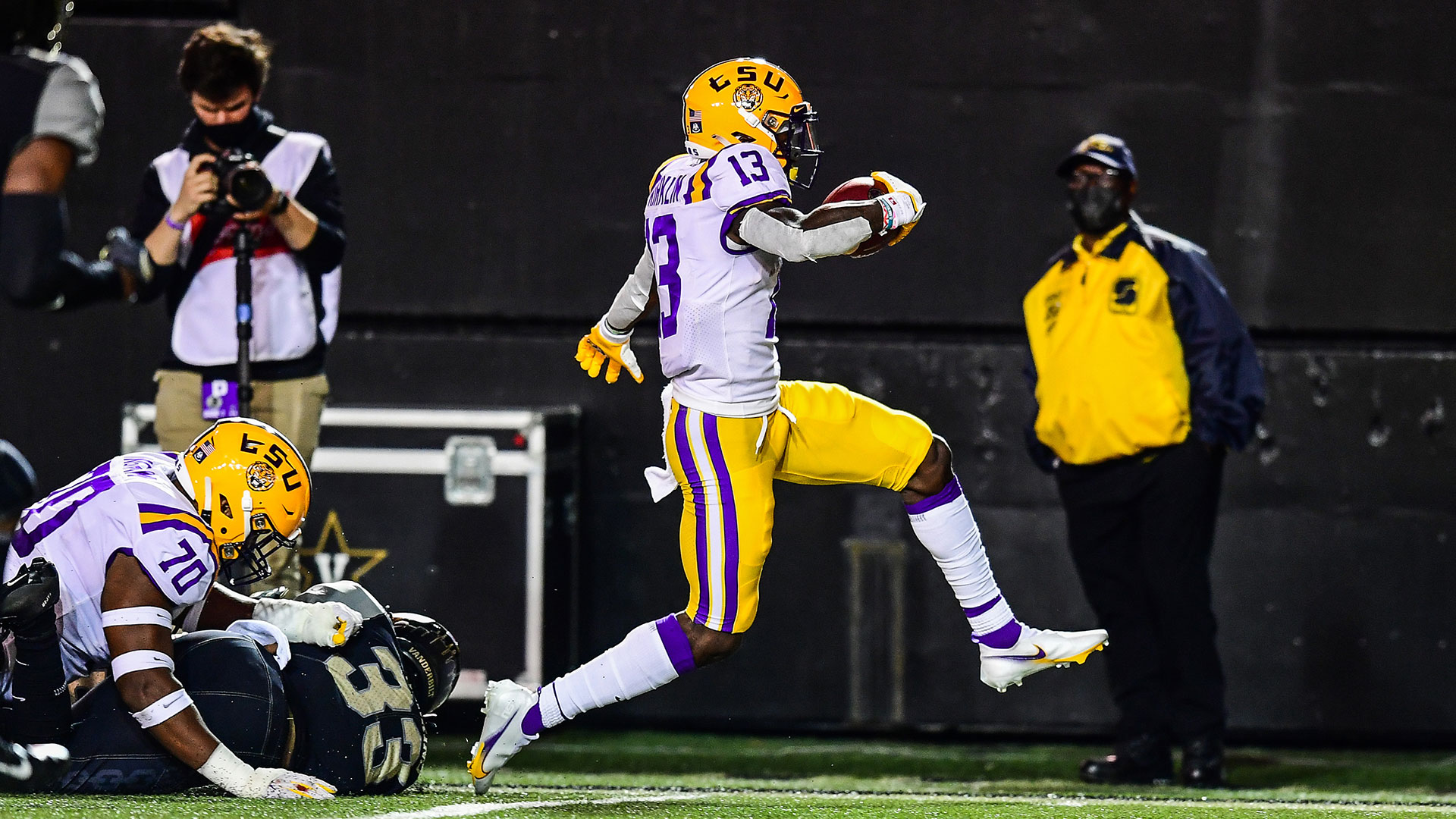 NASHVILLE, Tenn. — LSU quarterback Myles Brennan threw for 337 yards with four touchdowns, as the Tigers rebounded from a season-opening loss with an emphatic 41-7 victory over Vanderbilt on Saturday at Vanderbilt Stadium.

The Tigers finished with 498 yards of total offense, including a career-best 103 yards on 12 carries by sophomore running back John Emery Jr., who scored from 12 yards in the fourth quarter.

LSU improved in all three phases of the game, with the defense allowing 133 passing yards a week after giving up an SEC record 623. With the return of All-American Derek Stingley Jr., LSU totaled more than 100 punt return yards for the second time since the 2014 season.

Without being sacked, Brennan finished 23-of-37 passing for 337 yards with a pair of touchdown passes to wide receivers Terrace Marshall Jr. and Jontre Kirlin. Marshall caught TD passes of 16 and 51 yards, while Kirklin’s first career touchdowns came from 28 and 29 yards.

LSU built a 21-7 halftime lead and never allowed Vanderbilt to get back into the game in the second half. The Tigers gained 28 first downs while averaging 5.0 yards per rush.

Defensively, senior safety JaCoby Stevens had 10 of his team-high 11 tackles in the first half, while linebacker Jabril Cox added seven tackles. Stingley, who missed the season opener against Mississippi State, returned with six tackles and three punt returns for 92 yards with a long of 48.

Vanderbilt freshman quarterback Ken Seals completed 11-of-25 passes for 113 yards with a second-quarter touchdown to Ben Bresnahan which followed Brennan’s only interception of the contest. He was intercepted twice in the fourth quarter by LSU safety Todd Harris Jr. and freshman cornerback Eli Ricks, who has registered interceptions in his first two games as a Tiger.

The Tigers return to action on Saturday, Oct. 10, when the Missouri Tigers visit Tiger Stadium for an 8 p.m. CT kickoff. The game will be televised by ESPN and broadcast on the LSU Sports Radio Network beginning at 6 p.m.

Due to COVID-19 safety precautions, capacity in Tiger Stadium will remain 25 percent for the second game of the 2020 season.

Worsham: Improvement Across the Board

LSU won the coin toss and deferred its decision until the second half. Vanderbilt took opening kickoff but quickly went three-and-out when defensive end Ali Gaye forced a quick throw on third down.

Derek Stingley Jr., who returned to the lineup after missing the season opener, returned the punt 16 yards to the LSU 44.

The teams traded punts before LSU got on the scoreboard first with a 28-yard touchdown pass from Brennan to Kirklin, who scored for the first time in his LSU career. Cade York kicked the PAT for LSU and the Tigers led 7-0 with 6:09 to play in the first quarter.

Early in the second quarter, a sack of Seals by LSU nose tackle Siaki Ika put the Commodores behind the chains and led to a punt. Stingley returned the 53-yard punt 28 yards to the Vanderbilt 38-yard line to setup LSU’s second score of the game.

After three Emery rushes netted 22 yards, Brennan connected with Marshall across the middle and between two defenders for a 16-yard touchdowns. With 12:28 to play in the half, LSU led 14-0.

Vanderbilt put together an eight-play, 58-yard drive to break up the shutout. On third-and-goal, Seals connected with Ben Bresnahan for an 8-yard touchdown. Vandy trailed 14-7 with 5:07 remaining in the half.

LSU wasted no time answering the score, as Emery made an eight-yard reception and took a handoff for 16 yards to the LSU 49. On the next play, Brennan tossed a 51-yard touchdown pass to Marshall. The career-long reception gave LSU a 21-7 lead following the 55-second drive.

Vanderbilt advanced to the LSU 4 on the ensuing drive, however, placekicker Pierson Cooke missed a 22-yard field goals from left hash.

The second half opened the teams trading punts. LSU broke the ice in the third quarter with a career-long 53-yard field goal by York. With 10:25 to play in the quarter, LSU led 24-7.

LSU’s defense turned up the pressure on Seals, as sacks by defensive ends Travez Moore and Andre Anthony forced a punt on fourth-and-46. Stingley returned the 49-yard punt for 48 yards along the right sideline to the Vanderfbilt 20.

A third-down pass from Brennan to tight end Arik Gilbert came up three yards short of a first down. York entered for a 31-yard field goal and LSU extended its advantage to 27-7 with 7:10 left in the third quarter.

Vanderbilt managed a single first down on the next drive before punting back to the Tigers. After catches of 9 and 12 yards by Gilbert, Brennan connected with wide receiver Racey McMath for 22 yards to the Vanderbilt 41. Davis-Price gained a first down with consecutive rushes, allowing LSU to dig into its bag of tricks. Brennan handed off to Davis-Price for a third-straight play, but this time the LSU running back flipped it back to Brennan who launched a 29-yard touchdown pass to Kirlin in the back of the end zone.

The fourth quarter featured LSU interceptions by senior safety Todd Harris Jr. and freshman cornerback Eli Ricks. The Tigers turned Harris’ pickoff into points, as Emery went over 100 yards on the evening with a 12-yard touchdown run that put LSU ahead 41-7 with 8:11 to play.