Improvement Across the Board for Tigers Against Vanderbilt 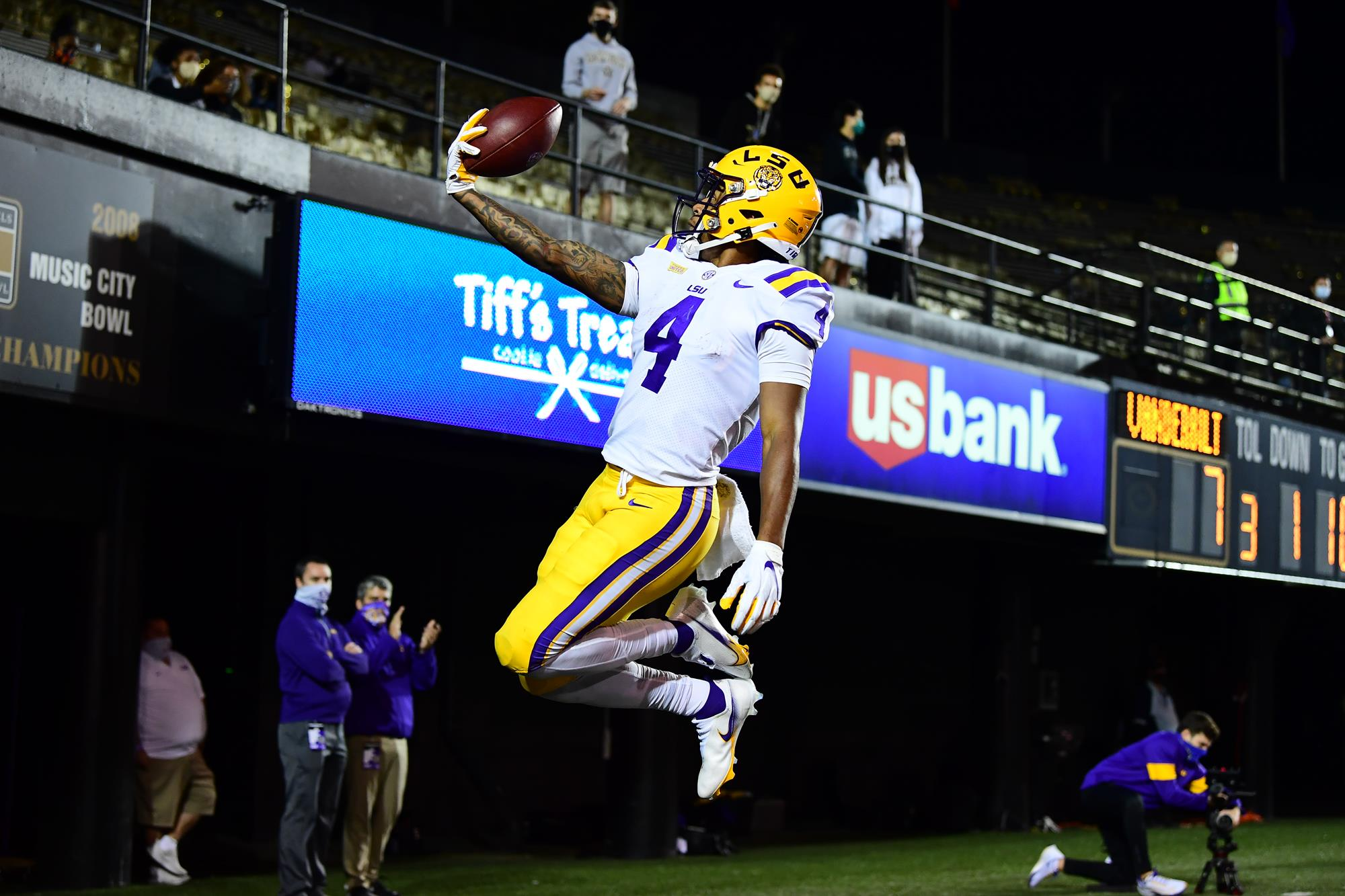 LSU made mistakes in its 41-7 win over Vanderbilt on Saturday in Nashville. They dropped passes, lost control of gaps, and left plays on the field on both sides of the ball.

Perfection wasn’t the goal on Saturday, though. Improvement was the primary mission. And LSU was better across the board against Vanderbilt.

“All week, guys wanted to get better,” head coach Ed Orgeron said. “There were a lot less mistakes in this football game than the first.”

Perhaps the biggest ascendancy came in the secondary, which had nowhere to go but up after giving up 623 passing yards last week. The return of Consensus All-American Derek Stingley Jr. created a chain reaction throughout the unit. He locked down his half of the field, surrendering not a single catch on the night and allowing the Tiger defense to divert its attention elsewhere.

“Derek makes a huge difference,” said senior safety JaCoby Stevens, LSU’s leading tackler on the night with 11 stops. “He’s the best corner in the nation. Guys think twice about throwing the ball his way, and that hesitation gives our front four time to get there.”

They got there plenty on Saturday. LSU’s defense sacked Vanderbilt quarterback Ken Seals three times, tallied eight tackles for loss, and added eight hurries. Like last week, the pressure was prevalent, but against Vanderbilt, the pass rush and pass defense worked in tandem.

The best example came late in the game. With LSU pinned back in the redzone, freshman B.J. Ojulari broke free into the Commodore backfield and forced Seals into an ill-advised throw. Todd Harris grabbed it for the Tigers’ second pick of the game.

All week, Stevens issued a “punishment” to the defense. They weren’t allowed to watch any football – except film of Vanderbilt.

“We might be on punishment again this week with how well we played,” Stevens joked.

For the game, the Tigers held Seals to 11-of-24 passing for 113 yards, intercepting him twice and allowing just one touchdown pass.

The improvements weren’t just week-to-week, either. The Tigers got better in-game, too, particularly against the run. Vanderbilt picked up 107 rushing yards in the first half, as running back Ja’Veon Marlow continually found holes in the LSU defense to rush through.

LSU adjusted, however, playing more Cover 1 to allow another run defender in the box. After the break, Vanderbilt managed just 46 rushing yards and 109 total yards and failed to reach the end zone.

“Bo (Pelini) did a great job at halftime, made some adjustments,” Orgeron said. “We didn’t have to blitz as much. We played a four man line. We played some cover one. We had more people in the box to stop the run. Guys fit their gaps. These coaches, those guys were coaching their butt off and locker room. I’m so proud of our coaching staff.”

The offense followed suit, finding more rhythm and comfort in the passing game and getting a breakout performance in the running game. Myles Brennan started fast and finished strong, connecting on 23-of-37 passes for 337 yards and four scores. Brennan completed his 23 passes to 11 different receivers, with Jontre Kirklin (3 catches, 65 yards, 2 touchdowns) and Terrace Marshall (2 catches, 67 yards, 2 touchdowns) leading the way.

“Tonight, he stepped up in the pocket,” Orgeron said. “He didn’t try to scramble to the right like he did in the first game. He stayed patient.”

Brennan said he spent the week in practice focused on drill work – standing tall behind his line, climbing the ladder in the pocket instead of bailing at the first sign of pressure. The result was a composed, steady performance dotted by explosive plays.

“Tonight we went out and we performed the way that we know how to perform. It wasn’t perfect by any means,” Brennan said, “but I definitely saw improvement.”

He was aided by the play of his running back. With Chris Curry unavailable, sophomore John Emery made the most of his increased workload. The Destrehan native rushed 12 times for 103 yards and a touchdown and caught three passes for 21 yards.

Emery raced out of the gates when he entered the game, rushing for 14 yards, 17 yards, and 17 yards on his first three carries, respectively. And when he got the edge on his final touch of the game, he took it 12 yards to the house for his first touchdown of the season and the final score of the game for LSU.

After seeing little playing time as a freshman due to ball security issues, Emery capitalized on his talent and enjoyed the breakout performance everyone had been waiting for.

“John got hot, and (running backs coach) Kevin (Faulk) kept him in,” Orgeron said. “We’ve been seeing this John Emery run in practice, and he finally got a chance in the game. What I’m most proud of is him protecting the football.”

Emery and the Tigers took a step or two in the right direction Saturday, but the progress can’t stop now. Missouri and the rest of LSU’s SEC-only schedule loom ahead. Every day’s mission must be the same as last week’s: be better today than yesterday, and better tomorrow than today.

“We took it a day at a time, and we improved on something every single day,” Brennan said. “And that’s what’s important for this team. Like Coach O says, we’re an ascendant football team. We’re going to get better every single day and every single week.”