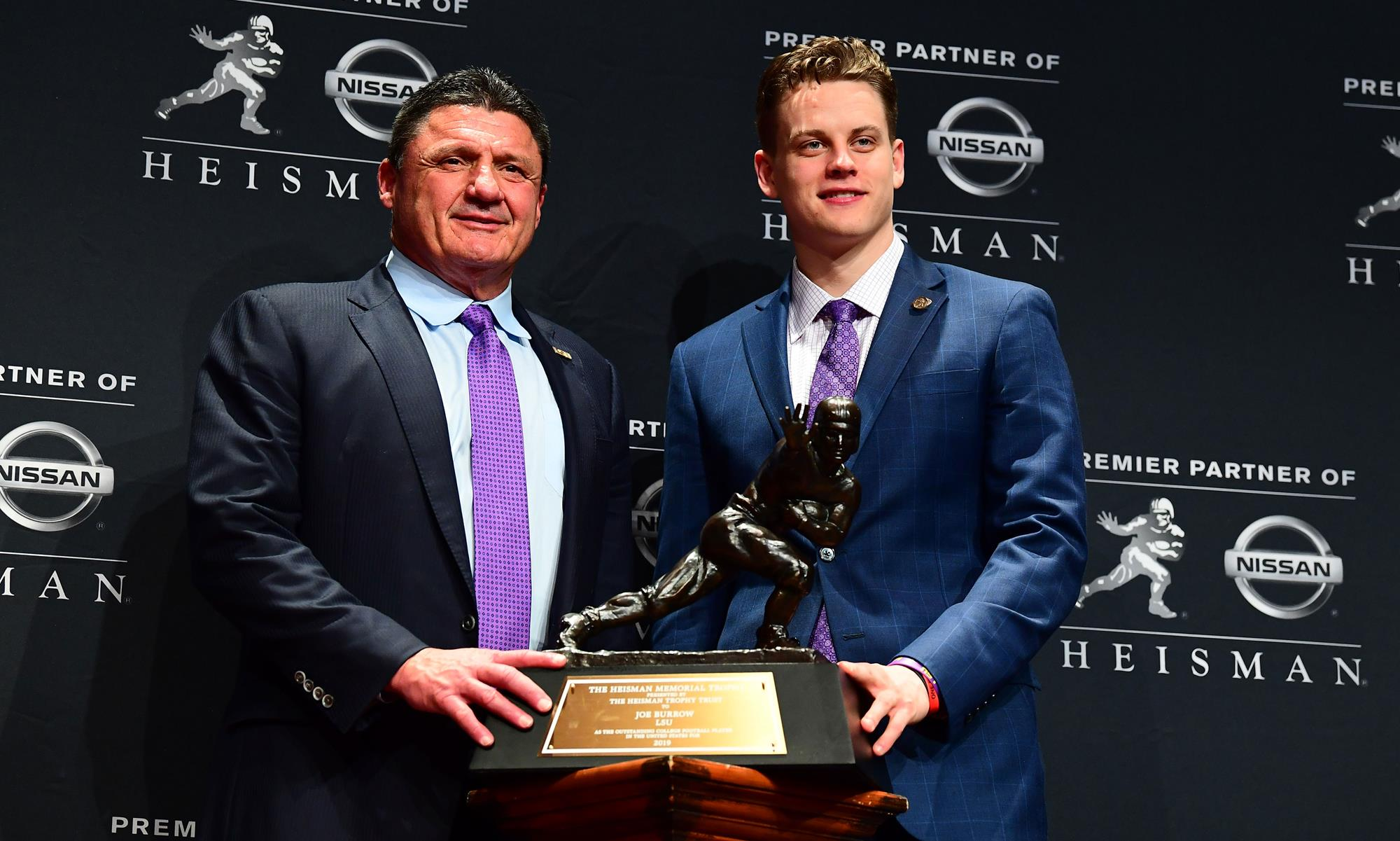 NEW YORK — For the first time in 60 years, an LSU Football player has staked his claim to the highest individual honor in collegiate sports, the Heisman Memorial Trophy. Senior quarterback Joe Burrow was announced as the 2019 winner at a ceremony at New York’s PlayStation Theater on Saturday evening.

As announced at 8:52 p.m. ET by Heisman Trophy Trustee Carol Pisano, Burrow became the second player from LSU to win the award, joining late halfback Billy Cannon who was announced as the winner on Dec. 1, 1959.

As a graduate transfer, Burrow signed to play his remaining two seasons of eligibility for LSU on the day Cannon passed away: May 20, 2018.

“I’d like to thank Louisiana, the entire state,” Burrow said in his emotional, 6 minute, 53 second speech after thanking his teammates, family and coaches. “Just a kid from Ohio coming down chasing a dream. And the entire state has just welcomed me and my family with open arms, and invited us in to be native Louisianians. I’ve learned to love crawfish and gumbo.

“Coach O,” Burrow continued, fighting back tears. “You have no idea what you mean to my family. I didn’t play for three years. You took a chance on me, not knowing if I could play or not. And I’m forever grateful for you. Can you imagine a guy like Coach O giving me the keys to his football program? It just means so much to me and my family.”

The vote was a historic runaway.

On Dec. 9, Burrow was named one of four finalists for the 85th Heisman Trophy. He was voted the winner over Oklahoma quarterback Jalen Hurts, Ohio State quarterback Justin Fields, and Ohio State defensive end Chase Young.

Awarded since 1935, “The Heisman Memorial Trophy annually recognizes the outstanding college football player whose performance best exhibits the pursuit of excellence with integrity,” according to HeismanTrophy.com. “The winners of the trophy epitomize great ability combined with diligence, perseverance, and hard work.”

Burrow, who turned 23 on Tuesday, was joined at the ceremony by members of his family including his parents Robin and Jimmy, brothers Dan and Jamie, and his grandparents. LSU head coach Ed Orgeron, LSU Athletics Director Scott Woodward, Louisiana Gov. John Bel Edwards, along with several LSU Athletics senior administrators and members of the Athletics Communications team were joined by Bunnie Cannon representing the Cannon family, LSU Football assistants Steve Ensminger and Joe Brady, and quarterback analyst Jorge Munoz.

Burrow, the 13th winner from Southeastern Conference, also set SEC records for passing yards and passing touchdowns in a season, becoming the only player in league history to throw for more than 4,000 yards and 40 touchdowns. With three more touchdown passes this season, he would become the third player in NCAA FBS history to throw more than 50 in a single season.

Known for his accuracy, composure, grit and leadership, Burrow is on pace to set NCAA records for single-season completion percentage (77.9) and pass efficiency rating (201.5).

“Thirteen-and-0,” Joe Burrow responded in reference to LSU’s 2019 team record when asked by Rece Davis on ESPN College GameDay about what’s been most meaningful. “All the records are great, but I have great people and great coaches around me, and a lot of great players. I’m sure you see it on Saturdays. It’s not just me out there. And, the cohesion between the coaches and the players is great. We have a great program going on right now.”

In 13 games, the Athens, Ohio, native has directed an LSU offense that scored a school-record 621 points, 47.8 points per game. The Tigers also scored 50 or more points a school-record six times in 2019 and LSU scored 40 points or more a record 10 times.

Burrow and the Tigers enter the College Football Playoffs ranked No. 1 in every major poll. LSU, winners of 14 straight games, will bring its 13-0 record into the CFP National Semifinal contest against No. 4 Oklahoma in the Chick-fil-A Bowl in Atlanta on Dec. 28.

Burrow set the LSU single-game mark for passing touchdowns with six in the 66-38 win over Vanderbilt on Sept. 21. He holds the second- and third-highest passing yards games in LSU history, tossing for 471 yards and four TDs in a win over Texas during the second week of the season and 489 yards and five scores in the 58-37 win over Ole Miss in November.

Dating to the 2018 season, Burrow has completed at least 20 passes in 16 consecutive games, also the longest streak of its kind in LSU history.

A two-year starter as a graduate transfer from Ohio State, Burrow has guided the Tigers to a 23-3 mark with nine wins against AP Top-10 opponents – most by any quarterback in school history.

LSU returns to practice on Monday, Dec. 16, in preparation for the Chick-fil-A Peach Bowl.

Quotes from 2019 Heisman winner Joe Burrow after the Heisman ceremony

On winning
“I’m just grateful for the opportunity and it’s a blessing to be here. There are three great other options who had incredible seasons as well. I’m so grateful for my journey and everyone’s help along the way.”

On his emotional state after winning
“That’s the most I’ve cried in 23 years of living. When I got up there, all the people that have helped me from five years old to this year, went running through my mind. That’s what happened.”

Was it a sense of relief?
“Yes, absolutely. I’m ready to back to Baton Rouge and start practice on Monday.”

On LSU coach Ed Orgeron
“He’s meant so much to me and my family. He gave me an opportunity when not a lot of people thought I would do anything. He trusted me and gave me the keys.”

On the coming playoff
“Whenever u get into the playoff, it’s going to be a dog fight. I haven’t watched film yet, I’ve tried to enjoy this week. But I will watch starting Monday.”

Describing his experience
“This is one of those things kids dream about. When I envisioned myself playing football, I dreamed of being on that stage and playing for a No. 1 team. So this is a dream come true.”

On representing his hometown of Athens, Ohio
“I lived in the foothills of the Appalachian Mountains. Not a lot of people know where that is. It’s an impoverished area and as much as I can give back I’m going to do it. It means so much to me.”

On being a Heisman winner along with Billy Cannon
“He’s obviously a legend in Louisiana. To be mentioned in the  same sentence as Mr. Cannon is an honor. I just try to give back to Mr. Cannon’s family and LSU as much as I can.”

“Well, what a special moment. I thought Joe handled everything throughout the Heisman campaign and event with first class. He’s done it in a great manner. He’s thanked everyone. It’s the first time I’ve seen him get that emotional. When you saw him up there it was with his heart, and that’s how he plays and that’s what makes him the best player in America.”

“It means so much (for LSU to win the Heisman). We haven’t had one since Billy Cannon. We all grew up watching Billy. Joe did a tremendous job to follow that.”

Noteworthy facts about the 2019 Heisman vote