Death Valley Comes Alive, as No. 5 LSU Tops No. 7 Florida 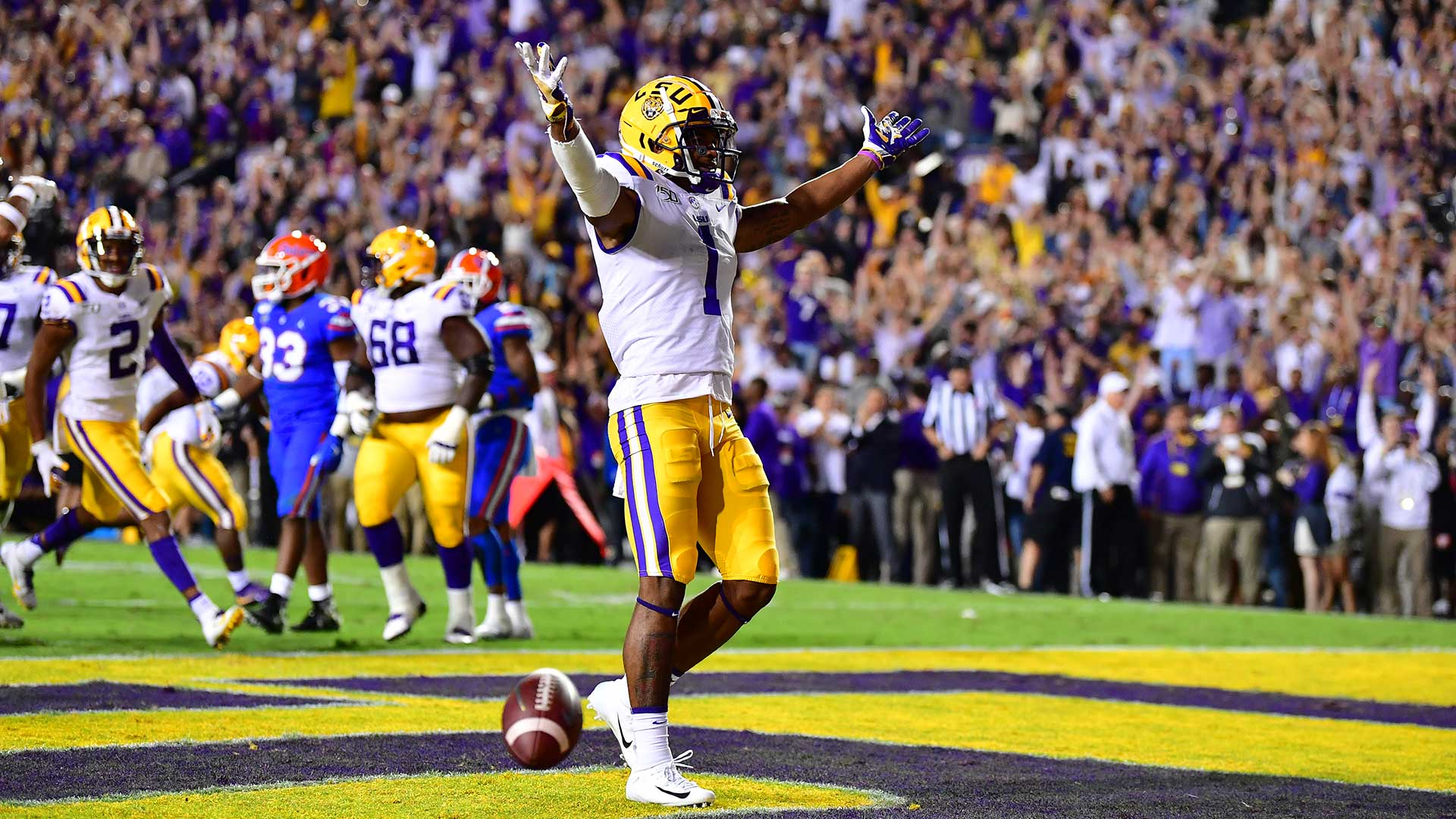 For the first time this season, LSU (6-0, 2-0 SEC) found itself behind in the second half, 28-21, when Florida wide receiver Van Jefferson caught his second touchdown pass of the game with 10:54 remaining in the third quarter.

The Tigers defense stepped up its game for the duration, while its offense continued to operate like a surgeon – slicing Florida to the tune of 10.6 yards per play, third-most in school history and most against an SEC opponent.

LSU ran only 48 plays against the Gators and scored 42 points while facing third down only four times, the fewest on record by a Tigers team (records since 1978).

Edwards-Helaire and freshman running back Tyrion Davis-Price added third-quarter touchdowns of 5 and 33 yards to give LSU a lead it wouldn’t relinquish with 3:15 remaining in the third quarter. Leading by a touchdown midway through the fourth quarter, Burrow connected on a 54-yard touchdown pass to Ja’Marr Chase that gave LSU an insurmountable two-score advantage.

Burrow and the Tigers offense were a model of efficiency against the Gators. The LSU signal caller completed 21-of-24 passes for 293 yards with two touchdown passes to Chase and another to Justin Jefferson, who led LSU with 10 catches for 123 yards. Chase had a team-high 127 yards on seven receptions.

Edwards-Helaire had 134 net rushing yards, while Burrow added 43 on six carries without being sacked. Davis-Price made the most of his three carries, totaling 40 yards.

The Tigers defense overcame a frustrating first half – which included a dropped interception in the end zone which resulted in a Florida touchdown – to shutout the Gators with the game in the balance.

After allowing four 75-yard, time-consuming touchdowns drives, LSU’s defense came up with consecutive three-and-out, third-quarter stop that swung the momentum of the game in LSU’s favor and brought the Death Valley capacity crowd of 102,321 to life.

LSU’s defense came up with two more stops in the fourth quarter. Florida marched from its 8-yard line to the LSU 16 when freshman cornerback Derek Stingley Jr. intercepted Kyle Trask in the end zone on third-and-1. With the Tigers holding a two-touchdown advantage with less than a minute to play, Florida went on a 15-play drive that ended at the LSU 4 with a fourth-down tackle for loss of Trask by linebacker K’Lavon Chaisson.

LSU returns to action Saturday, Oct.19, when the Tigers travel to Starkville to face Mississippi State. Game time for the matchup is expected to be announced on Sunday morning.

LSU captains – Joe Burrow, Thaddeus Moss, Patrick Queen and Blake Ferguson Florida won the toss and deferred to the second half. LSU received the opening kickoff and defended the South end zone to begin the game

LSU grabbed a 7-0 lead with 9:55 left in the first half on a two-play, 66-yard drive. Running back Clyde Edwards-Helaire sprinted 57 yards to the Florida nine, before quarterback Joe Burrow connected with Ja’Marr Chase on the next play for a touchdown.

Florida responded with a 75-yard, 12-play march as quarterback Kyle Trask hit wide receiver Trevon Grimes with a five-yard TD pass, tying the contest at 7-7 with 3:34 left in the first quarter.

LSU regained the lead at the 12:44 mark of the second quarter when Burrow fired a seven-yard scoring strike to wide receiver Justin Jefferson. The play culminated a five-play, 82-yard drive that was triggered by a 36-yard completion from Burrow to Jefferson to the Florida 31.

The Gators tied the game at 14-14 with a 75-yard, 13-play march that was capped by a one-yard TD pass on fourth-and-goal from quarterback Emory Jones to running back Lamical Perine.

LSU struck quickly on its next possession, bolting 75 yards on four plays as Edward-Helaire found paydirt on a 39-yard dash, giving the Tigers a 21-14 advantage with 3:55 remaining in the first half.

The Gators knotted the contest again with four seconds left in the first half when Trask connected with wide receiver Van Jefferson on a six-yard touchdown pass, capping a 75-yard, 11-play drive.

Florida took the opening kickoff of the second half and moved 75 yards in eight plays to take its first lead of the game. Trask threw a two-yard pass to Jefferson in the end zone at the 10:54 mark of the third quarter, giving LSU its first second-half deficit of the season.

However, the LSU offense soared down the field again, traveling 75 yards on eight plays as Edwards-Helaire completed the drive on a five-yard burst, tying the game at 28-28 with 7:12 left in the third period.

After the LSU defense forced a Florida punt from the Gators’ four-yard line, the Tigers regained the lead with a four-play, 52-yard drive that finished with a 43-yard TD run by running back Tyrion Davis-Price at the 3:15 mark of the third quarter.

Florida moved to the LSU 16-yard line midway through the fourth quarter, but the drive was thwarted when cornerback Derek Stingley Jr. intercepted a Trask pass in the end zone on third-and-one.

Up a touchdown with 7:26 to play, LSU’s quick-strike offense tried to use as much of the fourth-quarte clock possible. However, after picking up a first down with an 8-yard pass to Moss, Burrow found Chase streaking down the right sideline and connected for a 54-yard touchdown that made Tiger Stadium shake once again.

Florida overcame a 9-yard sack of Trask by K’Lavon Chaisson to enter LSU territory with less than two minutes to play. On fourth-and-3 from the LSU 10, Trask was intercepted by Kristian Fulton, however, LSU was called for roughing the passer to give Florida another shot.

On fourth-and-goal from the LSU 2, Chaisson stuffed Trask for a 2-yard loss on an option play to put the victory on ice.