No One's Slowing Down LSU's Offense 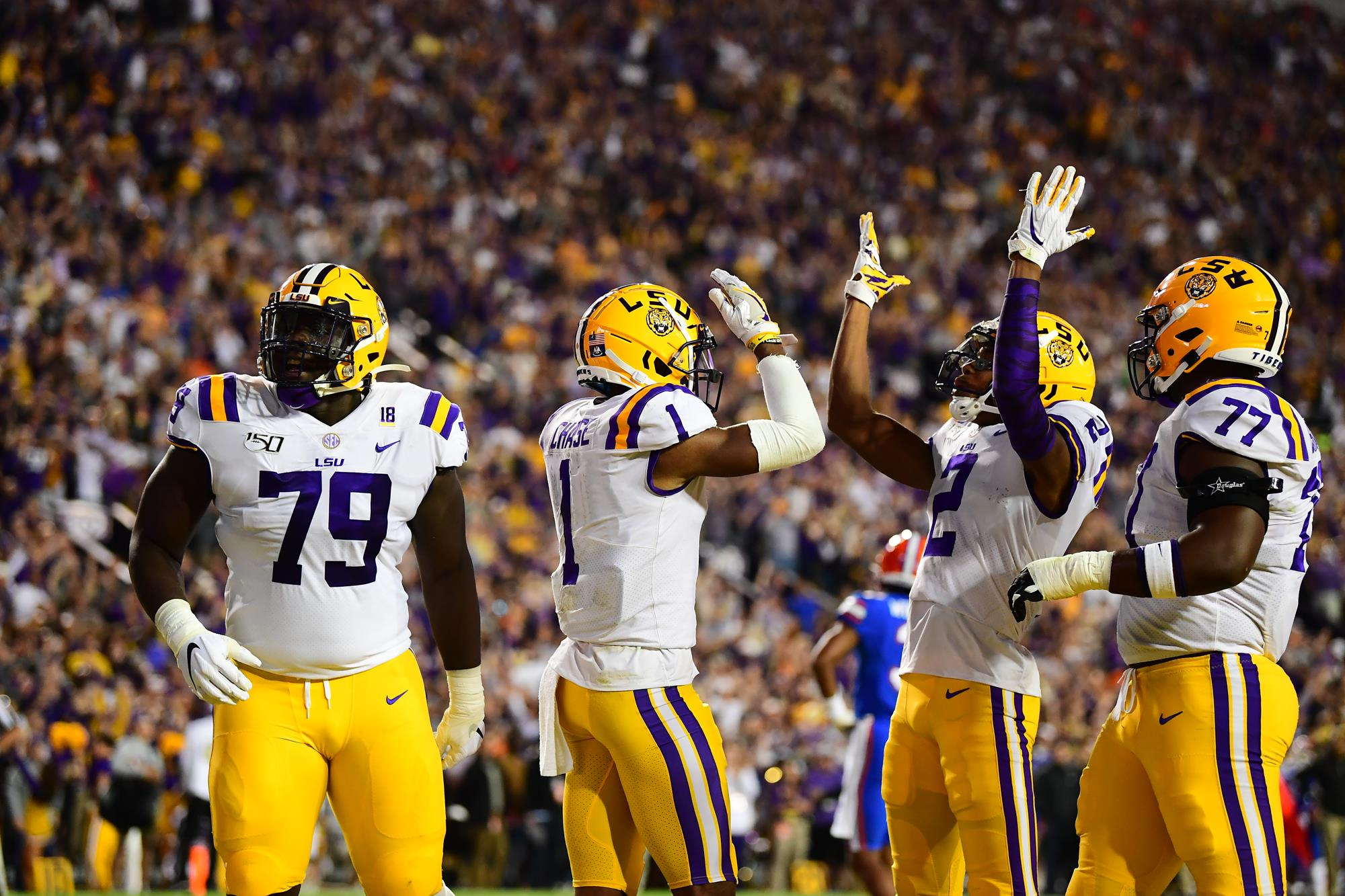 Some coaches might be tempted to pump the brakes. Bleed the clock. Run the ball – the Tigers had no trouble moving the ball on the ground all night, anyway –- and try to see the game out.

That, however, was not Orgeron’s message.

“I told them, ‘Look around. This is what we’re here for. We’re built for this. Championship teams would go down there and score.’ I challenged them,” Orgeron said. “They did it.”

After five record-setting games, LSU’s offense entered Saturday night’s matchup with No. 8 Florida with just one thing to prove to the world: that the Tigers could move the ball against an elite defense.

After a sixth record-setting game, in which the Tigers scored 42 points, tallied 511 yards, allowed zero sacks, surrendered zero turnovers, and needed just 48 plays and 21:41 of possession to dismantle that Gator defense, the world has all the proof it needs.

Take, for example, their final score of the night. Orgeron wasn’t tempted in the slightest to hand the ball off three times in a row to Clyde Edwards-Helaire, despite the running back’s 134 rushing yards on just 13 carries. He turned, instead, to quarterback Joe Burrow, who continued his Heisman run with a 21-of-24 passing night for 293 yards and three touchdowns, plus 43 more rushing yards on six carries.

“I told Joe, ‘This is what great quarterbacks are made of,'” Orgeron said. “When you have a quarterback like Joe, you just believe when he gets the ball in his hands, he’s going to score touchdowns.”

Burrow, meanwhile, entered the drive irritated. The Tigers had a chance on the drive just before to put the game away, but a false start on 4th and 3 in Florida territory forced them to punt.

“We were disappointed in ourselves,” Burrow said. “We had a shot, we were inside the 50. And on fourth down, we had a penalty and that moved us back. So we had to punt. We wanted to put the game away right there.”

The defense gave them another shot, though. After a shaky first half, in which Florida scored 21 points, picked up 246 yards, and controlled the ball for 20:13, the Tigers’ defense dialed up the pressure in the second half. Dave Aranda brought more blitzes. The secondary stuck tighter in man coverage. And, following a score on the opening drive of the second half, the Tigers kept the Gators out of the end zone the rest of the way.

It was freshman cornerback Derek Stingley who delivered in the critical moment. Florida attacked the freshman all night, including the drive and touchdown to start the second half. But the 18-year-old sensation didn’t hang his head.

Instead, he kept his eyes in the Gator backfield, and on third and 1 from the LSU 16, he read Florida quarterback Kyle Trask’s eyes and nabbed an interception in the endzone to get the ball back to the offense.

??BEST DB IN THE COUNTRY pic.twitter.com/6YkMS38UXF

So does the offense. Instead of sitting, the Tigers came out slinging. Sandwiched between completions to Ja’Marr Chase and Thad Moss was a three-yard run from Edwards-Helaire. On first and 10 from the LSU 46, offensive coordinator Steve Ensminger dialed up a pick play. Edwards-Helaire, split wide in the formation, came across Chase to his inside, and Chase’s defender got hung up on Edwards-Helaire’s.

Burrow threw a dime, and Chase cashed it for a 54 yard score to seal the victory.

“They’d been pressing Ja’Marr in the slot all night,” Burrow said, “so we ran a little pick play, got him open down the sideline. Clyde did a great job of doing his job on that play, and it turned into a touchdown. It was a great call by coach Steve.”

It was the crowning moment of a defining game for LSU’s offense, but it was only one piece of a larger puzzle.

There was Justin Jefferson, who caught all 10 targets thrown his way for 123 yards and a score. Jefferson was unstoppable all night, whether in quick routes or breaking off to freelance when Burrow scrambled out of the pocket.

There was Edwards-Helaire, too, who hit homer after homer, with runs of 57 and 33 yards, the latter for a score.

There was the five offensive linemen and Moss at tight end, too, paving the way in the trenches. Orgeron said the most important stat of the game was the zero sacks Florida tallied. Burrow called it “about as flawless an offensive line has ever played, that I’ve seen.” The Gators entered the game fourth in the nation in sacks and got five sacks on Burrow in Gainesville last year.

“They knew last year, (Florida) got after us up front,” Burrow said. “They took that personal. I was so proud of those guys. There was no pressure the entire night.”

After printing out the stats from last year’s loss to the Gators – five sacks, eight pressures, 11 tackles for loss – and placing them inside the locker of every offensive lineman all week, center Lloyd Cushenberry said there was no way his unit would play anything other than full tilt.

Burrow on offensive line: “They knew last year, (Florida) got after us up front. They took that personal. I was so proud of those guys. There was no pressure the entire night.” pic.twitter.com/jSKd21LbWE

“We heard the noise all week,” he said. “We wanted to come out and prove to people that we’re here, we’re coming.”

That was Burrow’s message to the team after the game: “Don’t let good enough get in the way of greatness.”

“That just means come back to work on Monday ready to go,” he said. “We still have a lot of room to improve. We just can’t get complacent because we have so much more room to improve, so much more to accomplish, and I really think we can get there.”

If they do get there, they’ll do so the only way they know how. Full speed ahead, until the tank is empty.

“That’s us,” Orgeron said. “Pedal to the metal. We’re going as hard as we possibly can, every single play. We feel like we can score, we feel like we’ve got athletes in space, and we’re not going to stop.”