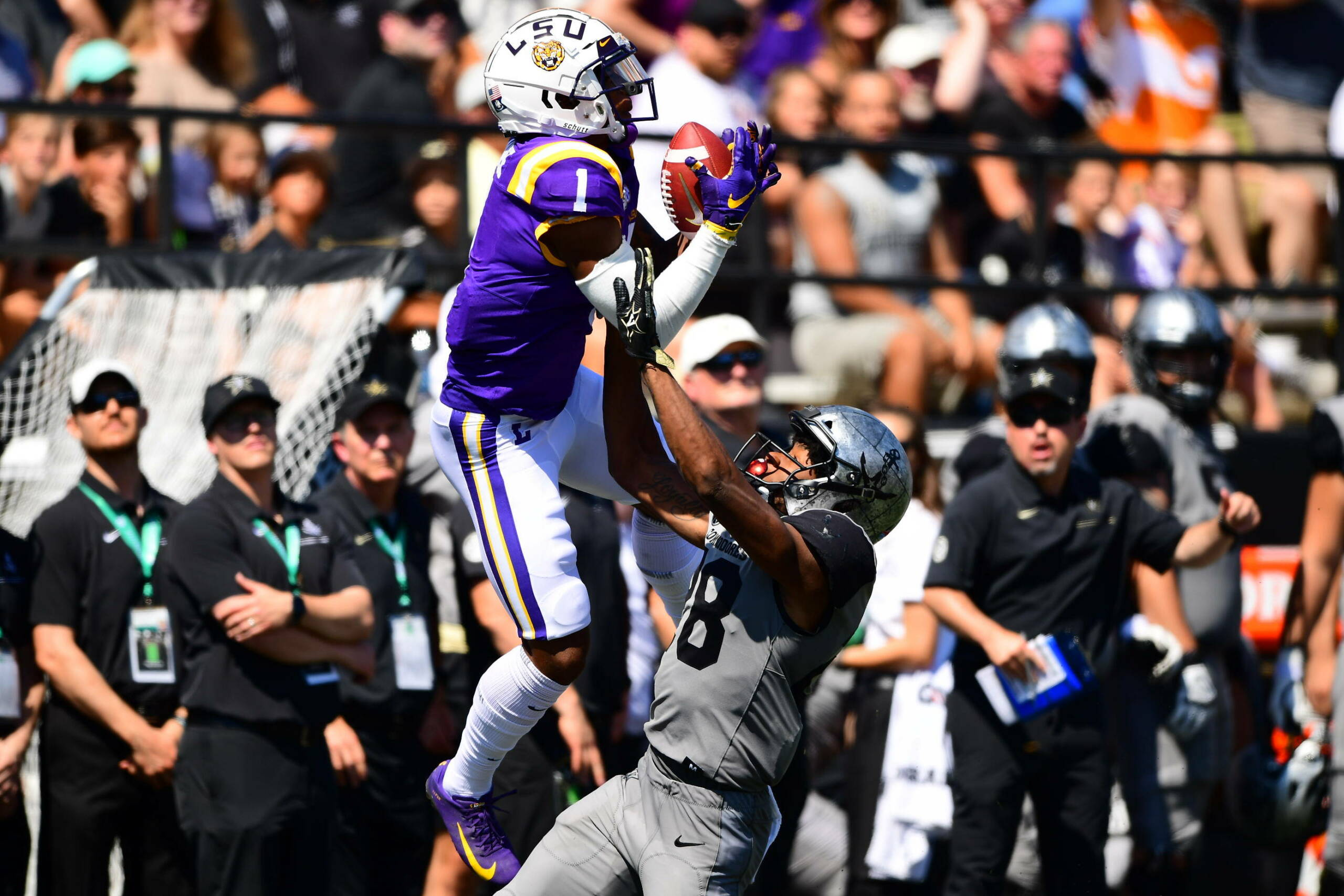 NASHVILLE – Everyone is talking about how good LSU’s offense is.

It’s all anyone can talk about – anyone, except the players who make that offense so good.

The Tiger attack conducted another record-setting performance in Saturday’s 66-38 win over Vanderbilt, mostly through the air, once again. Quarterback Joe Burrow broke a school record with six touchdown passes. Wide receiver Ja’Marr Chase became the third Tiger ever with four touchdown catches in one game. The Tigers, as a result, set a new SEC mark for points scored in the first four games of the season.

While the world signs their praises, the Tigers are taking a different tone.

Take Chase, for example. As Justin Jefferson trotted back to the sideline following his fifth touchdown catch of the season – the first of six Tiger scoring grabs in LSU’s 66-38 win over Vanderbilt – the sophomore wideout didn’t immediately congratulate his teammate.

“Me and Justin were walking off the field talking trash, telling each other how sad we are,” Chase laughed. “I told him, ‘That’s why you almost dropped your pass on your touchdown.’ He just started laughing.”

No matter how much everybody eats, they’re all still somehow hungry for more.

Chase can eat and talk simultaneously, apparently. When he wasn’t in his teammate’s ear, he was in the Vanderbilt end zone. His four scoring grabs set a school record for touchdown receptions in an SEC game and tied for the second-most in school history. He also set career highs with 10 catches for 229 yards.

After Jefferson’s score, Chase wasted no time catching up. On the first play of LSU’s second drive, he took a slant from Joe Burrow 64 yards to the house, beating the Vanderbilt safety down the sideline not for the last time on the day.

The brief drive – it lasted just the few seconds it took Chase to run his route, catch the ball, and sprint to the end zone – has become another feature of LSU’s offense, which now has 24 touchdown drives that have taken three minutes or fewer after having 23 such drives the entirety of last season.

In no mood to waste time, Chase would also cap off LSU’s fourth drive with a 25-yard back shoulder grab in the end zone before taking another slant to the promised land, a 51-yard scamper beyond the Commodore secondary to close the first half with 199 yards and three scores.

In his mind, he was playing catchup with his trash-talking teammates in the receiver room. Chase entered the day tied for third in touchdown catches with just one, well behind Jefferson’s four and Terrace Marshall Jr.‘s six. The three have a season-long bet on who will finish with the most scores, and the winner gets his choice of Waffle House or $100.

“We’ve got a lot of bets going on with me and Terrace and Justin,” Chase said. “I had to score at least three today so I could be back in a race for a touchdown race.”

Ja’Marr Chase is allergic to tacklers.

He met that number in the first half and surpassed it in the second, taking in his fourth score of the day on a ball Burrow dropped into his lap from 16 yards out.

Burrow’s been an equal opportunity distributor through four games of unprecedented production. Chase is the third receiver – joining Marshall and Jefferson – with a three-touchdown game so far this season.

It’s not part of the plan. It’s just how things unfold each play.

“They play a lot of man backside,” Chase said. “They played a lot of zero today. So Joe took advantage of one on one backside, and I just made the play when I got the ball.”

Like Texas and Northwestern State before, Vanderbilt tried to pressure Burrow, and discovered quickly its strategy was doomed. With Chase marked in single coverage, Burrow found a matchup he liked and went to it, time and time again.

“That’s one of the better performances I’ve seen,” he said of Chase’s day. “Nobody could cover him at all today, and he was getting open on just about every play.  I was happy for him to have had that kind of game.

“That’s just how it kind of happened. They were bringing a lot of pressure early. So I had to get the ball out of my hands fast. And he was the one winning right away.”

Ed Orgeron put it more succinctly in the headset during the game, after Chase went up through a pass interference penalty to bring down a 28-yard second-quarter grab.

“That’s called recruiting,” Orgeron said. “We always felt Ja’Marr could be that type of player.”

That fourth score for Chase was also Burrow’s record-setting sixth touchdown pass. He didn’t know about the mark until staff informed him on the sideline. In a spirit that embodies the collective offensive mindset, Burrow wasn’t satiated with six scores.

He wanted a seventh.

“They told me when it happened,” he said. “I was more focused on going to get another one.”

Chase and Burrow weren’t the only offensive standouts. Racey McMath caught five passes for 48 yards and a touchdown, and Clyde Edwards-Helaire rushed for 106 yards and a score, picking up 7.6 yards per carry.

“We heard on the pregame (shows) that we were one-dimensional,” said center Lloyd Cushenberry III. “So we had to prove them wrong.”

But even with 66 points and 599 yards of offense, the Tigers still left unsatisfied. Offensive coordinator Steve Ensminger and passing game coordinator Joe Brady left the press box in the postgame shaking their heads in frustration, perhaps because the Tigers turned the ball over twice, both times seeing Vanderbilt turn the turnovers into touchdowns. Burrow and Edwards-Helaire muffed a handoff exchange that the Commodores picked up in the end zone, and the Vanderbilt defense added a pick-six late against the Tigers second-teamers.

“We were a B today,” Burrow said, asked to grade the offense’s performance. “We were really good in the first half. Two turnovers that we can’t have cost us points. So we’ve got some things to fix.”

That’s not trash talk, and it certainly doesn’t match the tone adopted outside of their locker room. That’s just the truth, the mantra adopted by an offense producing at historic levels and rewriting the record books – and the national narrative around the LSU football identity – weekly.

“I think we’re starting to see that we can do this every game against every team,” Burrow said. “This is who we are as an offense. We’re gonna go try to score every time, we’re gonna throw the ball around. And we’re going to throw it to open up the run. So I’m happy with where we are right now.