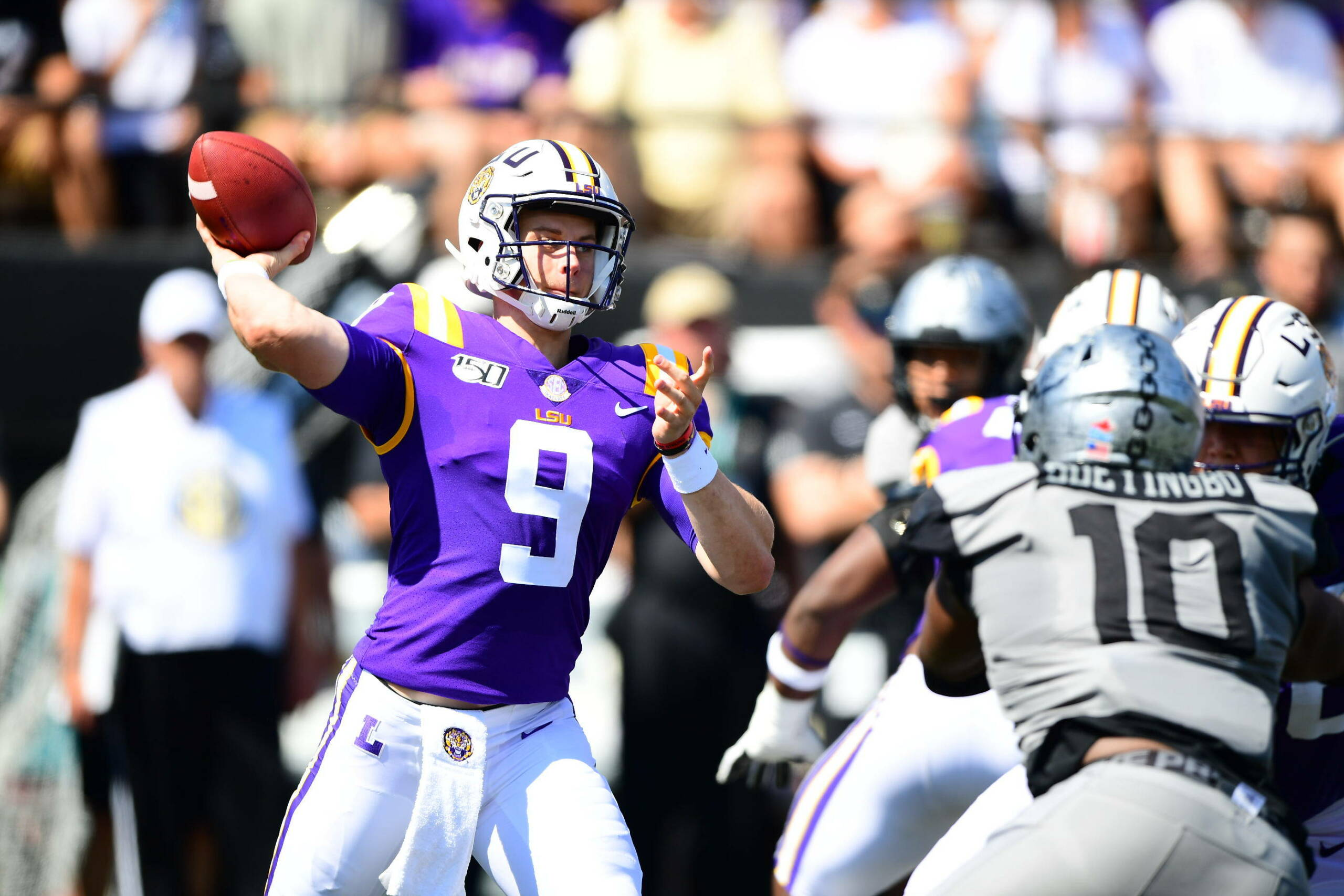 NASHVILLE — Joe Burrow and the fourth-ranked LSU Football team continued to set records and put up video-game numbers, as the Tigers defeated Vanderbilt, 66-38, on Saturday afternoon.

LSU (4-0, 1-0 SEC) scored its most points against a conference opponent in regulation in school history, as Burrow and wide receiver Ja’Marr Chase torched Vanderbilt (0-3, 0-2 SEC).

Burrow completed 25-of-34 yards for 398 yards with a school-record six touchdowns. Chase became the third LSU receiver to score at least four touchdowns in a game while posting 229 receiving yards – fourth-most in LSU history.

Chase caught a game-high 10 passes, while Terrace Marshall Jr. added four catches for 75 yards and Racey McMath had five catches for 48 yards and a touchdown.

LSU’s Micah Baskerville was the star of special teams, coming up with a 46-yard return of an onside kick to the Vanderbilt 1-yard line and blocking a punt and recovering the ball in the end zone for a touchdown.

After an open date on Sept. 28, the Tigers return for consecutive home games on Oct. 5 and 12 against Utah State and Florida. Tickets to the remaining home schedule are available at LSUtix.net.

After LSU won the toss, Vanderbilt took the opening kickoff and marched 75 yards on eight plays to start the scoring spree. After gaining 41 yards on the first play of the game, Vaughn capped the drive with a 5-yard touchdown run and the Commodores led 7-0.

The lead was short-lived: 73 seconds.

It took Burrow only five plays to tie the game, as he hit Chase for 20 and Edwards-Heliare for 46 before a 4-yard TD pass to Justin Jefferson.

As LSU’s defense quickly regrouped to force a punt, Chase took a slant and darted past two defenders for a career-long 64-yard touchdown that gave LSU a 14-7 lead with 8:38 remaining in the first quarter.

A three-and-out by Vanderbilt put the blazing hot LSU offense back on the field. Completions of 29 and 20 to Marshall led to a 9-yard scoring run by Edwards-Helaire. LSU led 21-7 with 4:58 on the first-quarter clock.

LSU completed its 28-point first quarter with a 26-yard reception by Chase from Burrow. The first-quarter point total tied a program record last set in 2011 vs. Louisiana Tech (quarterly scoring records since 1948).

The teams traded field goals in the second quarter – a 41-yarder by Vanderbilt’s Ryley Guay and a 25-yarder by LSU’s Cade York.

With less than a minute to play in the period, a mishandled exchange between Burrow and Edwards-Helaire was recovered in the end zone by Vanderbilt linebacker Eiljah McAllister for a touchdown.

Burrow was 18-of-24 for 357 yards a four touchdowns in the opening half, a school record for an LSU quarterback.

With little hope of stopping the Tigers offense, Vanderbilt tried an onside to start the second half. LSU linebacker Micah Baskerville picked up the bounding ball and returned 46 yards to the Vanderbilt 1-yard line. After a false start penalty, Burrow connected with tight end Racey McMath for a 6-yard touchdown reception. LSU led 45-17 only 12 seconds into the second half.

LSU put together its longest drive of the game, 11 plays that included a fourth-down conversion at the Vanderbilt 32. Chase caught his fourth touchdown of the game from 16 yards out to give LSU a 52-24 lead.

On the ensuing Vanderbilt drive, LSU linebacker Damone Clark sacked Neal on third-and-7. Then, Baskerville blocked a Vanderbilt punt and recovered in the end zone for a touchdown. The block was LSU’s first returned for a touchdown since 2005.

Vanderbilt scored on an 18-yard reception by Kalija Lipscomb to wrap up the third-quarter scoring.

With mostly backups in the game including quarterback Myles Brennan, freshman running back John Emery added a 6-yard touchdown run with 9:37 left in the contest. LSU extended its lead to 66-31.