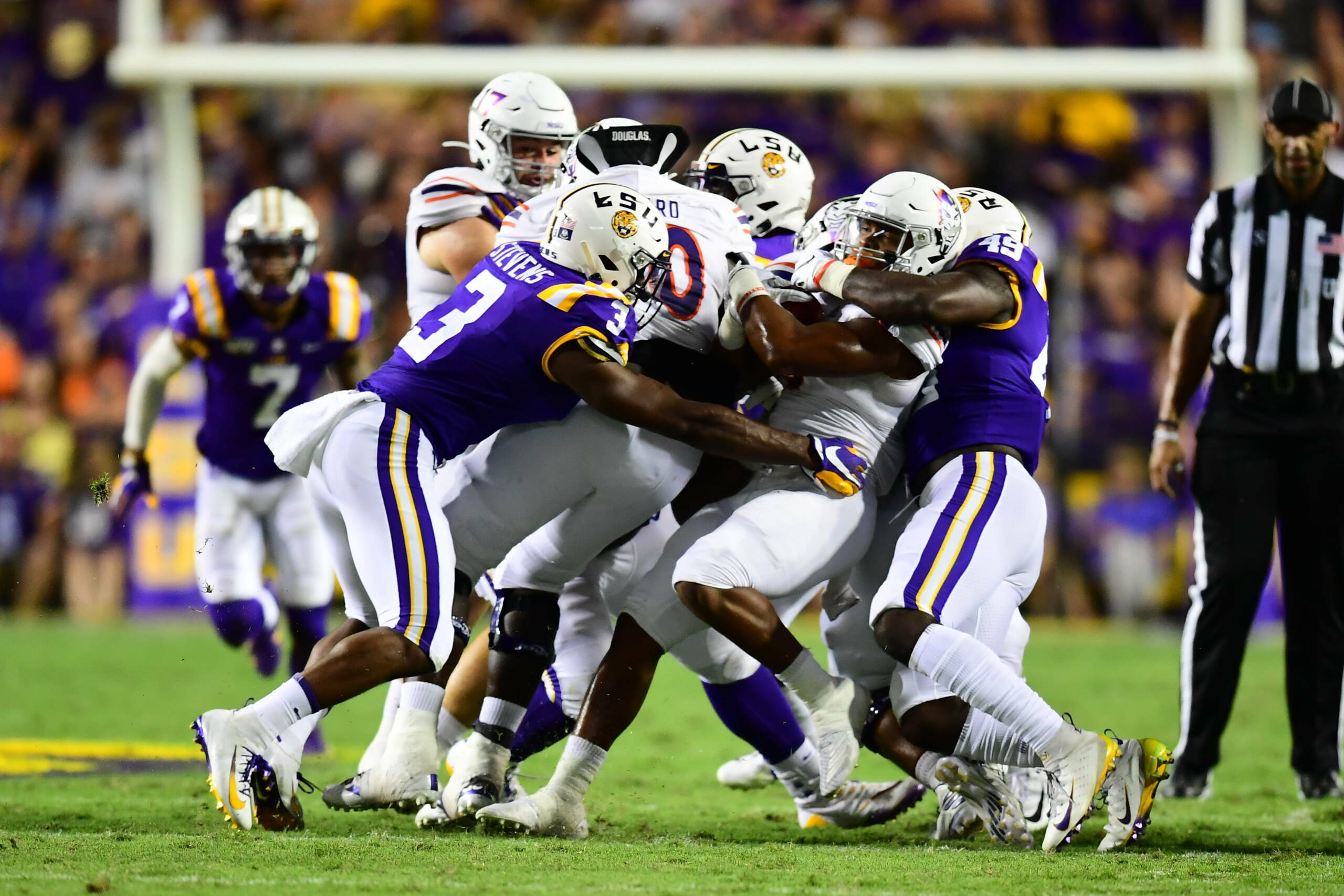 After a sloppy defensive first half against Northwestern State on Saturday night, the sound of LSU’s locker room at halftime was somewhat surprising.

The lack of sound, that is.

Despite Northwestern State’s 200 yards of offense, 172 passing yards, 17:25 of possession, and 50 percent third down conversions, LSU’s coaching staff didn’t adjust the volume of their voices or slam whiteboards. They just wrote on them.

They didn’t bemoan their problems. They went about solving them.

“Just a lot of adjustments,” said junior safety JaCoby Stevens. “Not a lot of screaming or yelling. We didn’t panic. We came in, made some adjustments, and it paid dividends.”

The yelling in LSU’s locker room came after the game, when the Tiger defense joined the celebration its offense had enjoyed for 60 minutes. As the latter continued its early-season steamroll of any opposition in its face – LSU racked up more than 600 yards of offense, including 488 in the air – the former shaped up over the final half-hour, pitching a second-half shutout and holding the Demons to 77 yards in the final two quarters.

“I’m proud of the defense,” said junior linebacker Jacob Phillips, who led the way with eight tackles on the night. “We came out in the second half and had a shutout, and we got to celebrate with the offense a little bit. The first half, we couldn’t celebrate, because we didn’t do our job. We don’t want to be carried by the offense. We want to be dominant in our own right.”

Using a quick-hitting, spread attack, the Demons found success over the middle against LSU’s defense early, as quarterback Shelton Eppler completed 16-of-26 passes for 172 yards and two scores before halftime. The first touchdown pass found a gap in the LSU zone defense, and the second came on a busted coverage by LSU, when a linebacker bit on a flat route instead of covering deep.

The early struggles on defense, the Tigers said, were a product of a scheme that needed tweaking as well as a mindset that needed fixing, too.

“We need to come out punching instead of coming out with our hands down. We came in thinking that Northwestern State was going to lay down, and they didn’t,” Stevens said. “They came out and scored 14 points. Once we woke up from that, you saw what happened out there.”

“Definitely not enough intensity, definitely not enough energy,” Phillips added. “I think in the second half we came out, we looked at ourselves in the mirror, and we were like, ‘Dang, bro, like, this shouldn’t be happening.’ We gotta have a shutout next half, we’re not going to walk off this field without having a shut out the next half. So I think that rose the energy a little bit and we played better because of it.”

They also adapted their strategy. Dave Aranda directed his defense to drop less into zone coverage and stick more in man-to-man. The first drive of the second half showcased that fix, as both Kristian Fulton and Derek Stingley had pass break ups that could’ve been interceptions.

“We played more man,” head coach Orgeron said. “The zones weren’t working. We tightened up our guys in man coverage. It worked. You saw us break on the ball a little faster. We almost got some picks. I think that was the biggest adjustment.”

In the past, Orgeron admitted, he might’ve lost his temper with a team struggling to put away a winless FCS opponent. But in a conversation with consultant John Robinson this week, Orgeron prepared for anything that might arise on Saturday by approaching the game with more understanding.

The confidence offered by one of the nation’s best offenses didn’t hurt, either.

“I felt confident,” Orgeron said. “I didn’t raise my voice that much at halftime. Coach Robinson and I talked before the game. He said, ‘You know Ed, sometimes, in these games, things don’t go right. We’ve just got to keep on chopping wood, keep on sticking to the plan.’ He helped me.

It’s an unusual dynamic for LSU – to have an offense thriving in its identity while the defense still searches for its. But that’s where the Tigers are, as they continue to adjust to life without Devin White at linebacker and Greedy Williams at cornerback as well as adjust to a triad of dissimilar offensive schemes.

“We’ve played three very different games,” Phillips said. “The first game was triple option, primarily run.  Second game, we went to Texas, they had a very good quarterback. They ran the ball some, they threw the ball some. We played a lot of zone, bracketed a couple people. In this game, we played a lot of man. I think we’re putting in a lot of different things on film.

“I don’t think offenses will be able to narrow down where we are on defense. But I think, us, internally, know where we are as a defense.”

Phillips says LSU is close to finding that identity, and even closer after that second half shutout. It was both a confidence booster to build on and a reminder of the standard they aim to play to.

“We’re going to try to keep that standard up,” Stevens said. “The offense is pushing us every day, because they’re going to be elite. We don’t want to be the weak link of the team. We have to do our job.”

No shouting required, either. There’s no point in getting mad at halftime. Just make sure there’s nothing to be mad about when the final horn sounds.

“Coach Aranda, he wanted to make it known, we don’t want to be walking off this field angry,” Phillips said. “We got on the board, we fixed up everything we were confused about. We got better, we made the adjustments, and we had a shutout the second half.”