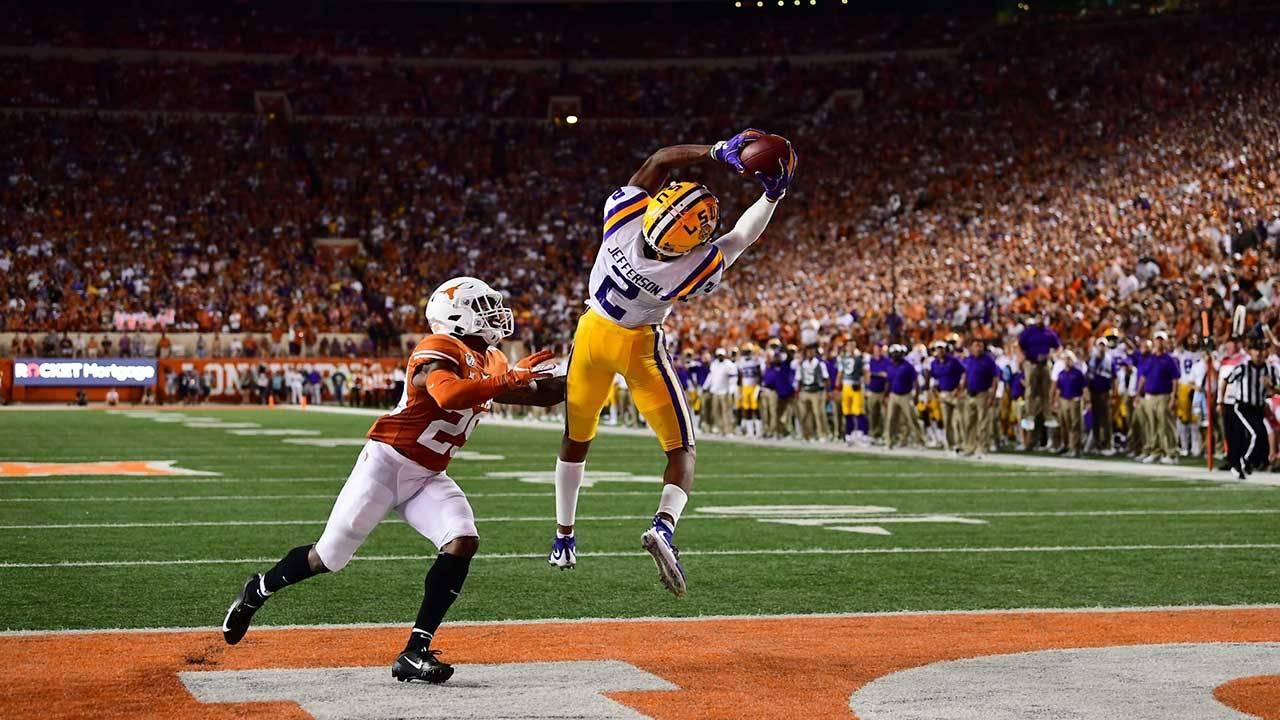 AUSTIN, Texas — Quarterback Joe Burrow passed for 471 yards, as No. 6 LSU earned its first non-conference road victory over a AP Top-10 team in program history, 45-38, over No. 9 Texas.

LSU (2-0), which made its first trip to Austin since 1954, found itself in a see-saw battle with Texas (1-1) in the second half. The teams combined for 56 points in the final 30 minutes including 39 in the fourth quarter on a hot and dry evening at Darrell K Royal – Texas Memorial Stadium.

Worsham: Burrow, Receivers Make History in the Air in Austin

Burrow finished 31-of-39 passing for 471 yards and four touchdowns. LSU had three receivers record more than 100 yards in a single game for the first time in program history: Justin Jefferson had nine catches for 163 yards with three touchdowns; Ja’Marr Chase added eight catches for 147 yards; Terrace Marshall Jr. had six catches for 123 yards with a touchdown.

Running back Clyde Edwards-Helaire led the Tigers with 87 yards on 15 carries with a touchdown in the fourth quarter.

Linebacker Michael Divinity Jr. had a team-high 10 tackles, while JaCoby Stevens added eight and Jacob Philips had seven. LSU recorded five sacks and had two goal-line stands in the first quarter in which the Tigers turned Texas over on downs twice inside the 2-yard line.

The Tigers trailed only once, 7-3 in the first quarter, in a game that featured only one punt in the second half – on the first drive of the third quarter.

LSU returns to action on Saturday, Sept. 14, when Northwestern State comes to Tiger Stadium for the annual Purple Game. Kickoff is set for 6:30 p.m. CT on the SEC Network.

Texas quarterback Sam Ehlinger completed 31-of-47 passes for 401 yards with four touchdowns, with Devin Duvernay being his favorite target (12 receptions, 154 yards, 2 TD’s). Ehlinger rushed 19 times for 60 net yards with a touchdown on the ground.

LSU won the coin toss and deferred its option until the second half. Texas elected to receive the opening kickoff, with the Tigers defending the south endzone.

Following a touchback on the kick by Avery Atkins, Texas used a screen to running back Keaontay Ingram on the first play for 19 yards to its 44. However, after an 8-yard scramble by Ehlinger, the Longhorns went no further. LSU safety Grant Delpit made a fine tackle of Ingram after a short reception to for a punt.

Starting from its 11, LSU put together a 78-yard scoring drive that included a pair of third-down conversions by Edwards-Helaire and a 38-yard reception by Terrace Marshall Jr. to the Texas 23. Though the drive stalled at the 18, freshman placekicker Cade York made a 36-yard field goal to give LSU a 3-0 lead with 8:04 to play in the quarter.

Texas’ ensuing drive spanned 71 yards – including 20 by penalty – but ended at the LSU 2-yard line when Ingram dropped a wide-open fourth-down pass in the left side of the endzone.

The turnover on downs was quickly followed by Burrow’s first interception of the season, when his third-and-9 pass was deflected at the line of scrimmage and intercepted by Texas linebacker Joseph Ossai at the LSU 12-yard line. Ossai was dragged down by LSU guard Damien Lewis at the 4 – what would turn out to be a touchdown-saving tackle.

Once again, LSU’s defense was up to the challenge, keeping Ehlinger out of the endzone on consecutive runs before Ingram was stopped for no gain at the 1 on third down. Ehlinger’s fourth-down try was stuffed in the backfield by LSU linebacker Patrick Queen and defensive end Glen Logan, turning the ball over to the Tigers for the second time inside the 2-yard line.

The Tigers were able to get out of the shadow of the endzone but only managed the 27-yard line before Zach Von Rosenberg entered to punt for the first time.

The Longhorns picked up a pair of first downs to the UT 45-yard line, but consecutive incomplete passes forced a third-and-10. Texas picked up the tempo, leaving the Tigers scrambling to get into defensive position. LSU cornerback Kristian Fulton misjudged an attempt to undercut the pass but it sailed over his head and was caught by Eagles at the LSU 27. Eagles was able to maintain his footing and complete the 55-yard touchdown catch-and-run. With 10:29 left in the half, Texas led 7-3.

Burrow and the Tigers wasted little time answering the score, with the senior quarterback completing 4-of-5 passes for 39 yards including a 6-yard touchdown connection with Jefferson on third-and-goal. The Tigers regained the lead, 10-7, with 7:30 to play in the half.

A holding penalty on the Tigers and a 17-yard pass to Devin Duvernay helped the Longhorns cross midfield, however, a third-down sack of Ehlinger by safety JaCoby Stevens ended Texas’ drive at the LSU 40. After initially lining up for a 58-yard field goal attempt, Texas elected to punt following an LSU timeout.

With time in the pocket, Burrow continued to find success pick his targets racing through the Texas secondary. Catches of 13 and 20 yards by Chase and 23 by Marshall put LSU at the Texas 24. After moving inside the 10, Burrow took a third-down sack from the Texas blitz and York entered for his second field goal of the evening. His 33-yard field goal gave LSU a 13-7 advantage with 1:41 to play.

Texas quickly went three-and-out including a 12-yard sack of Ehlinger by K’Lavon Chaisson, forcing a punt to Derek Stingly Jr. who returned 11 yards to the LSU 42.

It took Burrow only three plays to tack on another touchdown. A sweet 19-yard catch by Chase along the right sideline was followed by completions to Jefferson of 18 and 21 yards – the later a perfectly thrown ball over the top of a defender into Jefferson’s out-stretched hands for a touchdown.

On LSU’s first set of downs in the second half, a dropped pass on third-and-1 by Edwards-Helaire caused a quick three-and-out by the Tigers and allowed the momentum of the game to turn on the game’s final punt.

Nineteen plays later, Ehlinger rushed for a 2-yard touchdown that capped an 86-yard drive that left the LSU defense cramping on the 98-degree evening.

After a drive that took 21 minutes of real time, Texas cut the deficit to 20-14 with 6:51 remaining in the quarter.

A 41-yard pass from Burrow to Chase allowed the Tigers to calm the home-standing crowd, but after moving inside the Longhorns red zone the drive came to a halt. LSU settled for a 40-yard field goal by York to push its advantage to 23-14 with 5:10 left in the third quarter.

Again, Burrow and the Tigers responded with another efficient scoring drive, as Chase caught a 26-yard pass to the Texas 44 to setup a 26-yard touchdown reception to Marshall to start the fourth quarter.

Points kept coming in the wild second half, with Ehlinger connecting with Duvernay for a 44-yard catch-and-run on fourth-and-3. Texas cut the lead to 30-28 with 12:09 remaining.

With 2:27 left, Burrow made it tough on the Longhorns with a 61-yard touchdown reception by Jefferson that pushed the advantage to 14 for the first time, 45-31. A two-point conversion from Burrow to Chase capped the eight-point drive.

Texas scored with 22 seconds to play on a 15-yard pass from Ehlinger to Duvernay to provide the final margin.