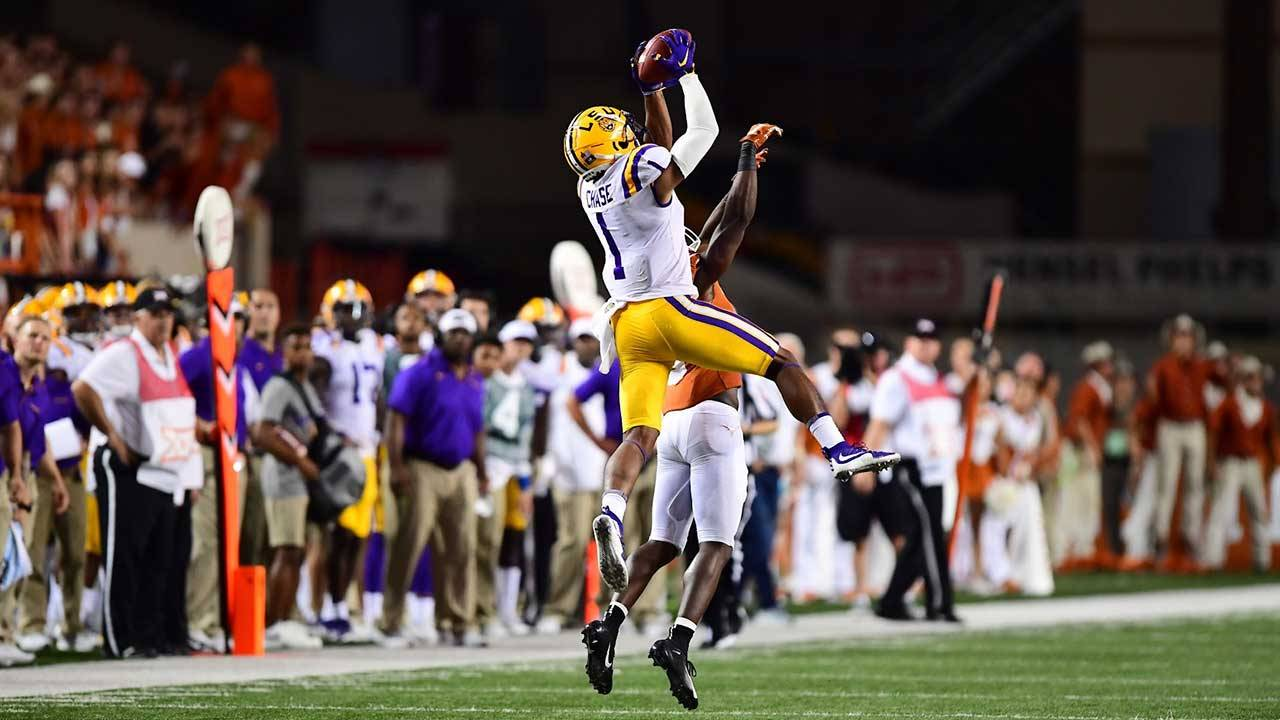 Earlier in the week, it was a challenge to the Tigers’ wideouts, a reminder of the job at hand – Step up this week. Your team needs you.

After the game, however, it was a commendation, a literal pat on the back to a player – a position group – who rose to the occasion.

The sixth-ranked Tigers (2-0) needed every single one of its record-breaking 471 passing yards on Saturday night in a 45-38 shootout victory over No. 9 Texas (1-1). For the first time in history, the Tigers saw three players eclipse 100 yards receiving in a single game.

“Those guys are so talented,” said Burrow of his receivers, who helped him to the second-highest single-game yardage in school history. “We have guys behind them too that can play just as well.”

All week long, the narrative surrounding the clash of the Tigers and Longhorns centered around each school’s claim to the title of “DBU” – Defensive Back University – an acronym Texas affixed on t-shirts in the days before the matchup.

Jefferson heard the chatter, and he took exception to it.

“They came out with the DBU statement,” he said. “We just felt like we had something to prove. We know this is a big game, big atmosphere. We just wanted to focus in, dial in, make big plays we’ve been talking about this whole season.”

No play was bigger than Jefferson’s 61-yard touchdown in the fourth quarter, the killshot in an epic shootout between two high-powered offenses. With the Tigers leading 37-31 and facing a third-and-17 from their own 39 – plus a red-hot Texas offense – offensive coordinator Steve Ensminger dialed Jefferson’s number.

“They were playing cover zero, and I knew I was going to have to take a shot,” Burrow said. “Clyde (Edwards-Helaire) did a great job of picking up the blitzing linebacker right through the middle, and I knew Justin – I was waiting for his stick on his last foot before I made the ball leave my hands. He just made a play for me. I got it out in front of him, and the rest is history.”

Jefferson, who moved into the slot full-time this season after spending most of his sophomore campaign on the outside, found space against the Longhorn safeties all night. On LSU’s first touchdown drive, his work over the middle – 3 catches on 35 yards and a touchdown – showed a vulnerability in the Texas defense.

When the Tigers had to have a play, it was clear where they’d go: deep the heart of the Texas secondary.

“I’d been killing the safeties the whole game,” Jefferson said. “We’ve been going over the deep overs all week. Joe trusted me to make the play, and I scored.”

That attack mentality is as new to LSU’s offense as its dynamic passing scheme. Past Tiger teams might have tried to milk the clock with a seven-point lead late in the fourth-quarter.

But past Tiger teams didn’t have this combination of moxy at quarterback and swagger at receiver.

“We felt like we had to score another touchdown,” head coach Ed Orgeron said. “We didn’t feel like that six-point lead was good enough. We had to go up two touchdowns to win the game.

Brady preached to his receivers a simple message all offseason: This team will go as you go.

Saturday’s explosion bore that conviction out. While Jefferson had established himself last season as an elite producer at receiver, Marshall and Chase enjoyed their breakout parties on Saturday night.

There are 6 Power 5 WRs (min. 10 targets) who have a perfect passer rating when targeted.

Marshall scored his fourth touchdown of the young season after going scoreless as a true freshman. His 26-yard grab over the middle on the first play of the fourth quarter put LSU ahead 30-21, and his 12-yard grab minutes later set the stage for Edwards-Helaire to rush in from 12 yards for a 37-28 lead. The sophomore hauled in all six targets thrown his way on the night.

Chase didn’t find the end zone, but he was the Tigers’ leading receiver until Jefferson broke Texas’ back with one last deep over. He picked apart Texas’ zone, exploiting seams near the sidelines for Burrow to find him in and winning a number of one-on-ones against man coverage.

“We go against the best DBUs at practice every day,” Chase said. “The hardest thing we do is practice. That’s harder than anything we’ll do in a game, to us.”

“The way they work every day, the swag they have, they come to practice with a swagger no one can match,” added junior center Lloyd Cushenberry. “It’s fun to watch.”

Marshall and Chase teamed up in the 2018 signing class as two of the highest-recruited receivers in the country. Each had his pick of schools, but both decided to play together for their home state, even if LSU’s passing offense had developed a national reputation for inconsistency. Together, they felt they could alter that perception, a feeling they made reality on Saturday.

“We actually spoke it into existence,” Marshall said. “We told each other we were going to come here and do our thing. Justin was added along, and I’m just glad to see my brothers eat.”

Burrow gave them more than enough food to feast on. He was accurate, decisive, and poised, delivering in the face of complicated Texas blitz schemes or picking their zones apart from the pocket. He found Marshall and Chase deep down the sidelines and Jefferson streaking across the middle. He dominated on first downs, completing 21-of-24 passes for 288 yards and three scores. He also delivered on third downs, none bigger than the clincher to Jefferson.

It’s that sort of throw that, in the words of one reporter after the game in a question to Burrow, has him in the conversation of elite quarterbacks in the country.

“I always kind of knew it,” Burrow said of his place among the best in college football. “I think everybody’s starting to see it a little bit. People that have been around me and myself kind of always felt that way.”

His head coach chief among them.

“The kid is a baller,” Orgeron said. “He lives for that moment.”

After promising to lead an LSU offense that would score “40, 50, 60 points per game” – a summer soundbite Burrow offered reporters this offseason – the senior is delivering.

“It’s a long season,” he said, “but you can just take a look at the last few scoreboards and figure that one out.”

Right now, Burrow’s got it all: an accurate arm, a well-designed offense, aggressive play-calling, the faith of his teammates, and, not least of all, some playmakers at receiver.

“Every one of those guys could be a No. 1 receiver for any team in the country,” said Cushenberry. “They’re the best group in the country.”