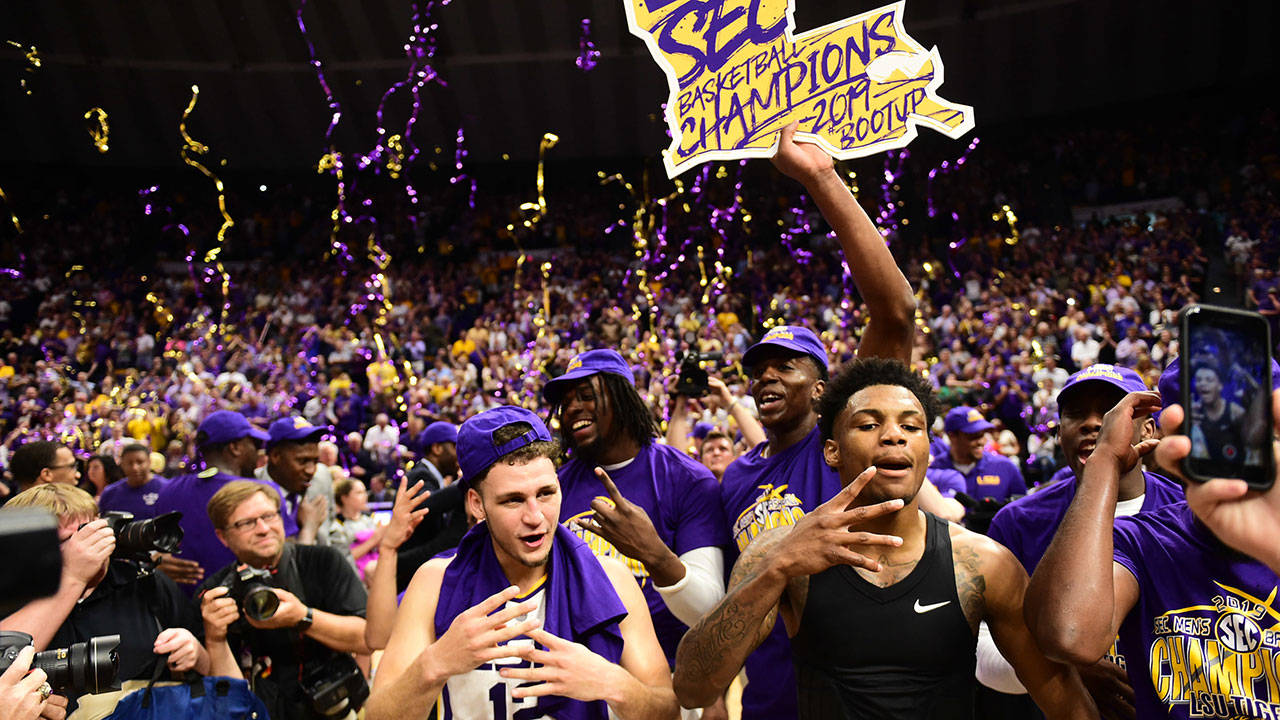 BATON ROUGE — With an inspired effort fueled by a capacity crowd at the Maravich Center, the LSU men’s basketball team captured its 11th Southeastern Conference Regular-Season Championship on Saturday night, 80-59, over Vanderbilt.

Forward Darius Days made five three pointers and led 6-of-8 Tigers dressed out who finished with double figures scoring with 15. Waters had 14 points on 6-of-12 shooting, while guard Skylar Mays added 13 and Marlon Taylor had 10. Marshall Graves made 4-of-8 three pointers for a career-high 12 points in 28 minutes of action.

On Senior Night, Kavell Bigby-Williams posted his seventh double double in SEC play with 10 points and 11 rebounds. LSU also honored senior Daryl Edwards, who has been out with an injury since Dec. 15.

LSU (26-5, 16-2 SEC), which clinched at least a share of the title following a Tennessee loss earlier Saturday, earned the outright title and will be the No. 1 in the 2019 SEC Tournament.

The Tigers will open the tournament Friday, March 15, at noon CT from Bridgestone Arena in Nashville, Tenn. The contest will be televised on ESPN and broadcast on the LSU Sports Radio Network.

On the afternoon of Friday, March 8, LSU announced that head coach Will Wade was suspended “until such time as we can ensure full compliance with the NCAA, as well as institutional policies and standards.”

Just after noon CT on Saturday, it was announced that freshman guard Javonte Smart would be “in an abundance of caution”

LSU also learned Saturday that freshman forward Naz Reid would be unavailable due to an injury suffered in Wednesday’s overtime victory over Florida.

In a raucous environment that hearkened memories of the “Deaf Dome” of the 1980s and 1990s, LSU rotated to keep its legs fresh in the opening half, built a double-digit advantage seven minutes in and never looked back.

The Tigers led 43-28 halftime, as Days made 4-of-5 three pointers while Graves connected on 3-of-5 to bolster the short-handed squad. LSU shot 55.9 percent from the field with seven three pointers.

LSU’s lead hit 21 points less than three minutes into the second half on a dunk by Taylor, and then ballooned to 30, 70-40, on a three-point play by Waters with 5:26 to play.

Opening statement…
“First, I’m just really proud of our guys. I thought that they showed a lot of resiliency. They really came together and showed a lot of resolve, I thought, with the leadership from guys like Skylar Mays and Tremont Waters. We probably had our best practice yesterday. The guys came out with great attitudes. We had a segment last night in the hotel – with it being senior night we let Kavell Bigby-Williams speak to the group. He did a great job. Then we went around and everyone has a chance to share things with Kavell. I’m just really proud that we were able to win for him and that he was able to go out a winner here. We’re not done yet.”

On being named interim coach and how he got the team ready…
“Well, they were prepared. We’ve got a great group. When I was named interim I told them we’d be co-coaches. We’ve got a great staff. Greg Heiar, he should be a head coach somewhere. Bill Armstrong. Those guys are great coaches. They’ve been around a long time. We just picked it up. When you have leadership from guys on your team like Skylar Mays and Tremont Waters, those guys did a great job. I said, ‘Guys, you’re going to have to help me.’ When you’ve got a guy like Tremont Waters, it makes it a little easier too. That’s basically what we did. Try to get them focus and tunnel vison. All we control is what we can control. Today. Right now. Let’s go out and have a great practice, a great film session and let’s see if we can go out and have some carry over today. I thought our guys came out really focused tonight.”

On giving the ‘keys to the car’ to Tremont Waters…
“When we have players that have the ability of a Tremont Waters, a Skylar Mays, as a coach they can get in your way. I just said, ‘Look guys, I need you guys to help me and help those coaches. Just go make plays.’ One thing we had to do was defend. We felt if we got out and defended and got stops, we could get out and push the tempo which we were able to do. I thought we set the tone pushing the basketball and getting some easy buckets. And then, I’m really proud of Marshall Graves. Marshall was a (high school) teammate of Wayde (Sims) and Sky and I’m really proud of him for coming in there and making some baskets. He wouldn’t pass it. He was shooting from Steph Curry land tonight. Then Darius Days. I thought Darius had one of his better nights. He made some big shots for us when we needed to and went on that run.”

LSU Guard Tremont Waters
On playing without Coach Wade…
“I had to take on the role of being the coach on the floor more than I usually do. We did not do anything different. We tried to space the floor out, run read offense and move the ball. We had to get stops and we did a great job of that. My teammates did a great job of listening and knowing that I had to make calls. When you have great teammates, it is hard to go in the wrong direction.”

On Marshall Graves‘ performance…
“Every time people ask about Marshall, I tell them he is the best shooter on the team. I stand by that. You cannot write a better story. Marshall is an unbelievable worker and an unbelievable person. When things go right for him, we expect it. I am just so happy for him.”

LSU Guard Skylar Mays
On playing without Coach Wade…
“Tremont (Waters) was the coach on the floor. Tremont did a great job facilitating, knowing when to score and knowing when to make throws. It is something he has been great at all year. I am proud of him and all of these guys. We deserve to be up here wearing these shirts and wearing these hats. We have come a long way. We have been through a lot of adversity. We still have more to go, but we are happy where we are at right now.”

LSU Forward Darius Days
On the performance from beyond the arc…
“I was just getting open. We kept executing. Coach always told me to shoot the ball with confidence and that is what I did tonight.”

LSU Guard Marshall Graves
On the shooting performance…
“It felt amazing, just as you would expect. It is just a special blessing to play with this team. It is easy to have confidence and play well when you have great teammates behind you and great coaches that believe in you. I definitely have a lot of people that I play for and we all have a lot of people that we play for. Wayde (Sims). I play for God, first and foremost. Just all glory to him and it was a great day.”

On having Wayde Sims‘ family cut the net…
“It meant a lot. For me especially, knowing Wayde as long as I have. Since playing high school with him. It was an incredible moment. If anybody deserves to go up there and cut those nets down it is them. They are amazing people. We are all behind them 100 percent, as well as this entire community and entire state. It was a special moment.”

Opening statement…
“Congratulations to LSU for winning the championship and having a tremendous season. I think I saw the stat that they haven’t lost a road game in the league, which is just amazing. Credit to them. They played well, shot the ball well. I thought (Darius) Days had a career day against us.”

On if he has coached in an environment like LSU…
“Yes, but the LSU fans were tremendous tonight. This league has great attendance so, we see great atmospheres in a lot of different places. The student section today, I thought, was a little extra loud. So, credit to them for coming out and really supporting their team.”

On Darius Days‘ night…
“He hit five out of six three’s. His percent is about 30 or 31 percent. The most he hit was three in a game and that was the first conference game of the year. We obviously did all of our research coming in for how we were going to defend, and it’s tough when you put (Tremont) Waters and ball screens with him. Waters is such a terrific player. Just controls the whole tempo of the game. I thought out of his five looks he might’ve had two that we were running in, and he probably had three that we were right there on him, and he made it. If he can make shots like this, that’s added weapon for them to use the rest of the year.”