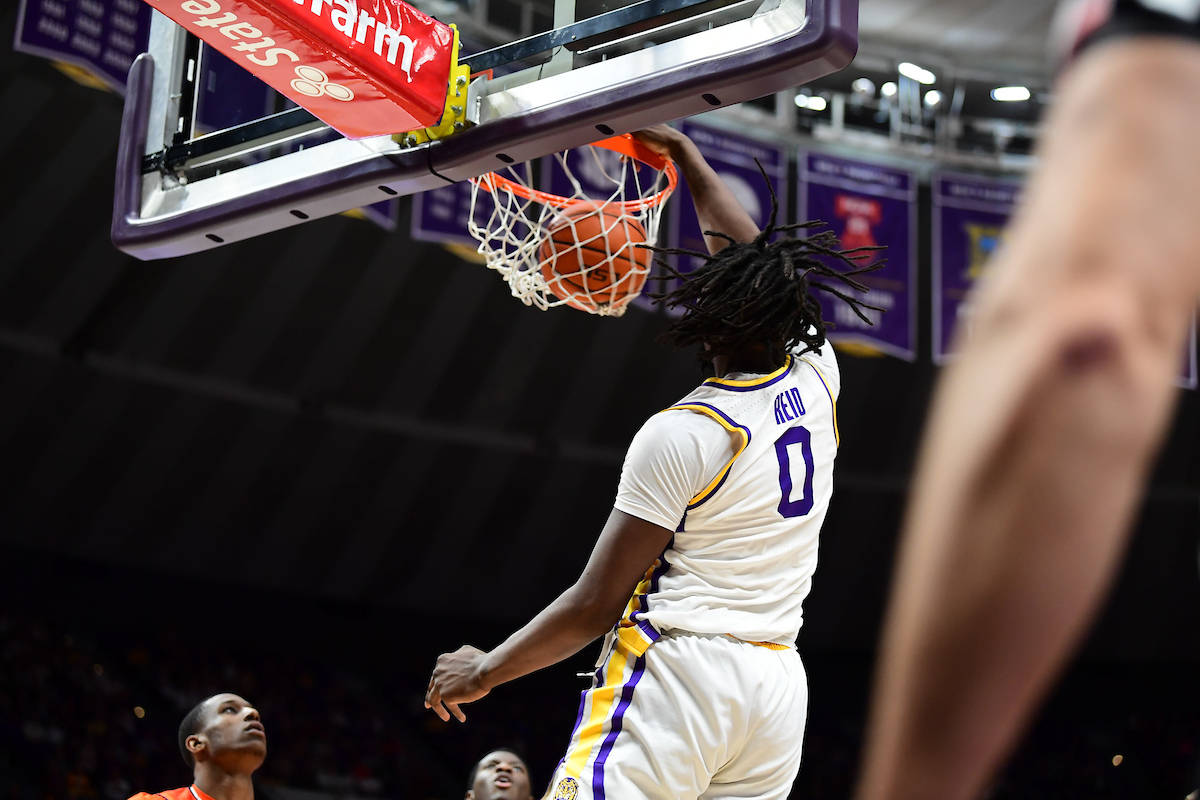 BATON ROUGE – The No. 21/22 LSU Tigers rallied from a 16-point first half deficit and dominated Auburn on the offensive boards to score an 83-79 win over Auburn Saturday afternoon at the Pete Maravich Assembly Center.

LSU out rebounded Auburn, 48-35, and 23-7 on the offensive boards that allowed the Tigers to get a 29-1 advantage on second chance points. The Tigers also took advantage of 19 Auburn turnovers, posting a 31-12 advantage in points off turnovers.

That helped offset Auburn’s three-point shooting as Auburn made 16-of-38 attempts on the night (41.1 percent). LSU shot about its average from the arc, 33.3 percent, but did make nine on the night.

Skylar Mays led LSU with 20 points and no turnovers in 35 minutes of play, while Tremont Waters had another points-assists double double with 19 and 10 to go with three steals. Naz Reid had a double double of the points-rebound variety with 13 points and 11 boards, and Kavell Bigby-Williams had 10 rebounds to go with seven points.

Auburn’s Jared Harper had 25 points and eight assists, while Chuma Okeke had 12 points (14 rebounds), Anfernee McLemore and Bryce Brown had 11 points each.

Much like last year’s game in Auburn, Auburn came out firing from the arc, although LSU got off to a good first four minutes up, 9-6. But Auburn’s first four buckets were three-pointers and from that 9-6 start by LSU, the Auburn Tigers went on a 13-0 run that made it 20-9 in favor of Auburn.

But LSU finally got things going and slowly worked back into the contest much to the delight of the crowd of 12,004. The Tigers scored the final five points of the half in the last minute with three coming from Waters right before the horn to trail only three, 41-38.

The Tigers took the lead back from Auburn in the first three minutes after Brown scored the first points of the half to give Auburn, a 43-38 advantage. Marlon Taylor and Naz Reid off offensive rebounds, both had layups and the Auburn lead was one, 43-42. After Brown missed a three Waters came down for a three to put LSU up 45-43 at the 17:01 mark.

Harper would make two free throws to tie the game for the third time at 45-45 and Waters came down for another three and the Tigers would have the lead for good, 48-45, at the 16:45 mark.

But Auburn would not go away, cutting the lead to three, 79-76, on a Harper three with 31 seconds remaining. LSU was called for a five-second count after an Auburn timeout and Okeke got a layup to make it 79-78 with 26 seconds to play.

Skylar Mays made two free throws to get the game back to three and Auburn had a chance to tie. Harper missed a three, the Tigers got the rebound, but turned the ball over in the backcourt. Brown had a chance to tie with a three but Reid heavily contested the shot and the ball was out of bounds to LSU. Waters made two free throws for the final margin.

The Tigers are on the road for two games next week starting at nationally-ranked Kentucky on Tuesday at 6 p.m. Baton Rouge time at Rupp Arena before traveling to Georgia next Saturday. LSU is back at home on Feb. 20 against Florida.

Opening statement…
“Great win. They’re a tough matchup. They play so hard. They play so fast. Coach (Bruce) Pearl does a phenomenal job with them. We weren’t able to settle – it’s kind of like the game last year – we weren’t even able to settle in before they started barraging us from three. We were able to slowly impose our will. I think we were 29-1 on second-chance points, 38-18 in the paint and we had 22 offensive rebounds. We got a couple threes to fall in the second half which helped. We did a good job on Bryce Brown. (Jared) Harper got going. The bigs, that’s always a problem for us, those pink-and-pop bigs. The bigs got going a little bit. We made enough plays to win the game, but they’re a very, very good team. They’re a talented team and a tough matchup for us with how fast they play. The pace they play. We were able to slowly get our game plan into the game and settle in. We were very fortunate to be down three at the half and at that point I thought we could settle in and go from there.”

On Naz Reid‘s defense at the end of the game…
“Huge. We had to switch and Naz had a stick hand up the whole time. He knew when (Jared) Harper put that ball in his left hand, he was going up. He knew as soon as that thing touched the left hand it was going up and he did a phenomenal job. I thought he played a great game, offensively and defensively. Double-double. He’s just continuing to improve and continuing to play at a high, high level.”

On this team being able to recover and win after slow starts…
“We were pretty ready to play. I thought we were ready to go. A couple of those threes they hit were just really – (Jared) Harper hit one where Skylar (Mays) was draped on him. They were really, really tough shots. I like that our team hangs in there. Sometimes we’re hanging by a finger nail. We hang in there, hang in there, hang in there, and we’re able to make plays and get back in the game and hold them down.”

On being able to hit more three’s in the second half…
“We changed our rotation a little in the second half to rotate in some three-point shooters. We were able to kick it back for some pick and pops. It was just a game of whether they were going to make more threes or we were going to get more offensive rebounds and points in the paint. It was who could win out as it went through.”

On Skylar’s performance…
“He has not been shooting the ball well. I feel like as a team, we know that he can shoot, so whenever he is open, we try to make it a priority to get him the ball. He knows he has the confidence to shoot it and obviously everyone has seen him play and it works. I am just going to keep giving him the ball and I know Naz [Reid] keeps finding him and Javonte [Smart] as well. As a part of our team and the way we play, we have to give him the ball.”

On enduring the first half and pulling away in the second half…
“We pretty much always come out and get punched in the mouth and we try to turn it around. As a team, we just know we have it within us to withstand a 40-minute game, so we play all 40 minutes. I feel like when that happens, we pick up our intensity and start playing our best basketball.”

On Naz defending Jared Harper…
“[Jared] Harper is a great shooter and we knew either Harper or [Bryce] Brown was going to shoot the last second three, but Naz would be able to switch off. We know that mentally and physically, he is perfectly fine being able to move. He keeps them in front of him, but to have the discipline to back up and know that he is going to shoot and keep the hand up, that just shows his level of maturity.”

On the slow start…
“I think we have to do a better job of coming in and competing from the jump. What I love about this team is we do not back down from anybody and we just keep going. At the end of the day, we are going to give ourselves a chance to win, and we know that. We can’t take that for granted.”

On playing better today…
“Just playing aggressive. My shot has not been falling. I think the biggest thing for me was continuing to get in the gym and taking shots I am comfortable with and trusting that they will fall.”

On offensive changes at halftime…
“We were just more aggressive and found the shooters. Something Coach Wade talked about in the locker room was to keep playing with intensity.”

On defending Jared Harper late in the game…
“Obviously [Jared] Harper is a tremendous shooter. Once I saw the ball go in his left hand, I was just waiting for the jump shot. He shot it and I was able to touch it.”

Opening statement…
“It was a great effort. We played really well. We’re a much better basketball team than we were three weeks ago. You want to make that progress. Give them credit for taking advantage of their size but we still have to call ourselves out and be accountable. We’ve got to toughen up. You have to rebound like your life depended on it. Again, that was a big focus. In our pregame conversations, our defense was great. Our scout was great. I had a great game plan. We had to makes threes. We made 16 of them. We shot 48 percent on the road. We should have been up by double digits in the first half. That might have changed things. I’m proud of my team. They played with great effort and energy. It’s a miss. It was an opportunity for another quadrant one win. This would have been four straight over LSU. That matters. We didn’t take advantage of it.”

On the impact that Anfernee McLemore and Chuma Okeke had for Auburn …
“We thought we needed to get Anfernee [McLemore] some looks early. He delivered. Chuma [Okeke] got a double-double. There were shots that he had that were great looks. He was 2-for-6 from the three and he could have been 5-for-6. He didn’t have an assist which was unusual. Horace [Spencer] and Anfernee are playing well.”