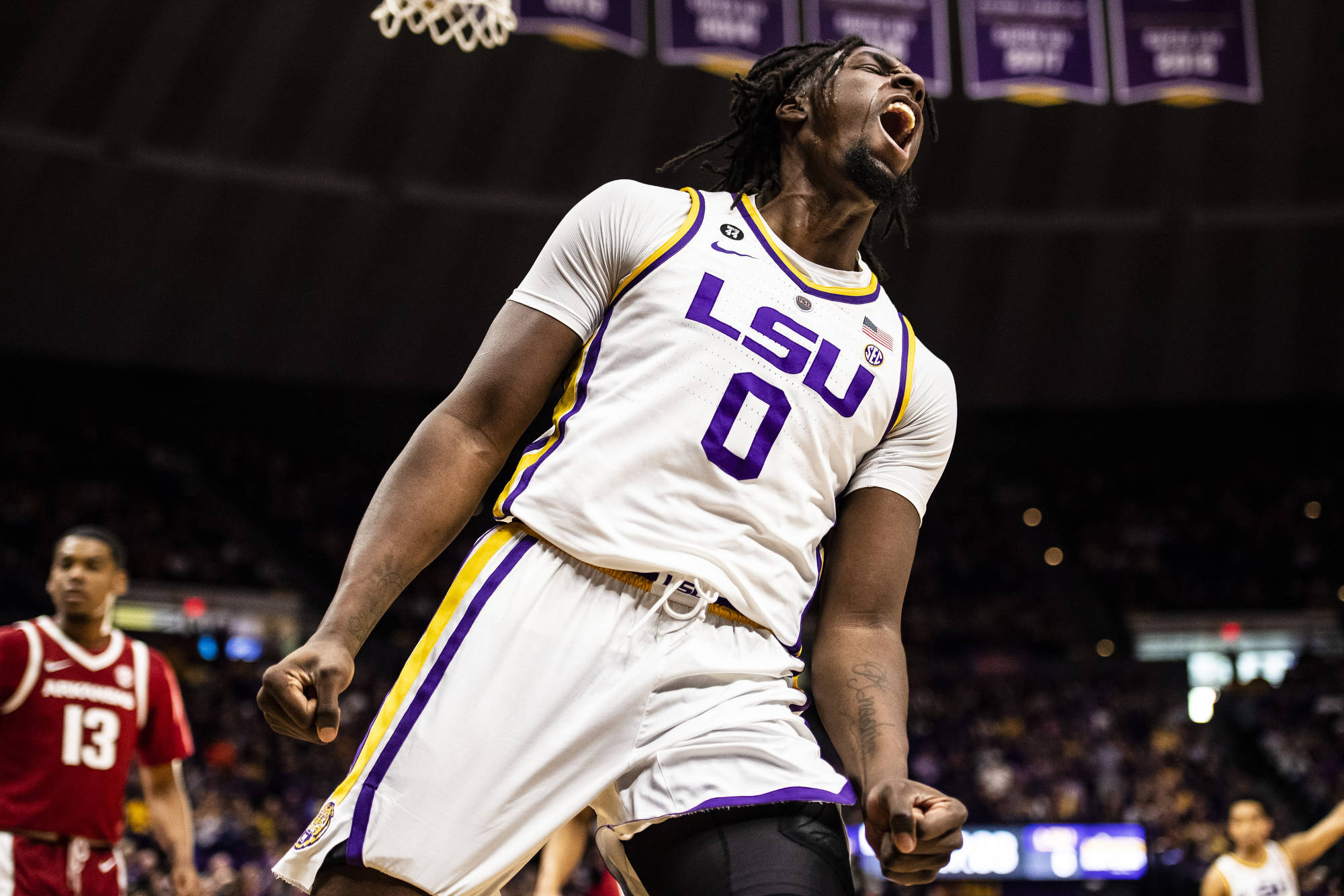 BATON ROUGE – Mason Jones’ six-foot bucket with 22 seconds to play doomed what was almost another amazing comeback by the LSU Tigers as the Arkansas Razorbacks pulled off the upset, 90-89, Saturday at the Pete Maravich Assembly Center.

The Razorbacks survived a frantic comeback by LSU as the Tigers rallied to take the lead on two occasions, the last at 2:01 to play at 89-88 on free throws by Smart.

The Tigers loss snapped a 10-game winning streak overall and an 18-game home winning streak that is tied for the second longest in the Maravich Center’s 48 years as the home of LSU basketball.

The game was officially listed as a paid sellout of 13,311, the 10th biggest announced attendance in the building’s present capacity of 13,215 (post 2005 season) and the 11th sellout since the reconfiguration of seats dropped capacity to the present number.

Naz Reid had a double double to lead LSU with 19 points and 10 rebounds, while Javonte Smart had 18 points, Skylar Mays 17, Tremont Waters 12 points and six assists and Kavell Bigby-Williams 10.

Despite the Hogs shooting 63 percent with six threes in the first half, the Tigers were down just four, 45-41, at the intermission.

But the Razorbacks continued to torch the Tigers from distance and inside in the second half, opening a double digit lead, 56-46, with 17 minutes to play and as much as 18, 66-48, with 13:45 to play. However, then things began to happen for LSU.

Arkansas would push the advantage back to 13, but LSU came again, getting it back to five at 80-75, on two Waters free throws with 5:50 to play. Arkansas would connect on one free throw and after a Waters layup miss, Emmitt Williams dunked the put back to make it 81-77.

Off another turnover, Smart had a steal and a layup and LSU had the crowd roaring as the Tigers were down just two, 81-79, with still 4:55 to play.

But the Razorbacks made another three on the other end to back up five before Waters made two free throws, Arkansas turned it over again and off a Smart miss, Reid had the dunk follow this time and LSU was within one, 84-83, with 4:14 to go.

Arkansas’ Gafford on the other end, missed a layup, had another blocked by Marlon Taylor, but LSU’s Reid was called for a foul after getting the rebound leading to the final media timeout at 3:50 to play.

Out of the break, Joe missed a jumper, Waters got the rebound and found Smart for the layup that put LSU ahead for the time since leading 11-9 early in the game.

On the ensuing Razorback possession, Waters fouled Joe and he made two free throws to give Arkansas the lead back at 86-85. Smart was fouled on the other end and made the first to tie the game at 86 with 3:20 to play.

After missing the second Williams got the offensive board and was fouled. He made one of two to give LSU back the lead at 87-86 at the 3:19 mark. But Gafford got a lay-in to put the Hogs back by one.

Both teams then missed three-pointers and Smart was fouled on the LSU end and made two free throws with 2:01 to play to make it 89-88 setting the stage for the wild finish.

There would only be one more bucket the rest of the way, that being Arkansas’ game winner. Before that, Arkansas would turn the ball over on a shot clock violation. Smart missed a three-pointer, Adrio Bailey jumper was blocked by Taylor and LSU had the ball with 45 seconds remaining.

Waters and Taylor tried to hook up on an alley oop play that they have connected on several times this season, but the play was unable to be completed and Arkansas came down to score on Jones’ lane bucket to take the lead.

In the final seconds, Reid drive to the bucket hit the side of the rim. Smart’s baseline jumper hit the far side of the rim and Reid scrambling to get the rebound, got off a 19-footer as the horn sounded, hitting the front of the rim.

LSU dominated the second half in rebounds, 29-10, and 14-3 on the offensive boards, finishing the game with a 44-20 advantage in rebounds. The Tigers had a 19-4 advantage in offensive rebounds and 21-6 in second chance points.

The Tigers go on the road to face Mississippi State in Starkville on Wednesday night at 8 p.m. at Humphrey Coliseum (ESPN2, LSU Sports Radio Network) before returning to Baton Rouge for a game on Feb. 9 at 1 p.m. against Auburn.

Opening statement…
“I want to thank all of our fans. I thought they were awesome. They almost willed us back. I thought they were phenomenal. That was as loud as I’ve heard the arena since I’ve been here. Very disappointed we couldn’t pull it out. Arkansas, give them credit. They played tremendously. They played harder than we did for a majority of the game. We cranked it up there with about 14 minutes left. Arkansas played great. Their penetration and pinch offense, they were sharing the ball. They found their open shooters. We didn’t guard them nearly as well as we needed to. (Daniel) Gafford had another big day. Just a tough loss for us.”

On what the teachable moment is after a loss like this…
“We’ve been cruising through this for a while. This was kind of the same as Missouri. We kind of escaped that. When you walk a tight rope, we’ve been walking a tight rope for about two weeks, you’re eventually going to fall off. We just fell off today.”

On what the 21 turnovers can be attributed to…
“We can’t turn the ball over. We turned the ball over 19 times at their place. You can’t turn it over 21 times. Three or four of those were charges. Just didn’t play as well as we needed to. Arkansas had a lot to do with that. They were swarming defensively and they did a nice job.”

On the number of uncontested shots that Arkansas was able to take…
“We got put in rotation. When you get put in rotation at the point of attack, then those guys get wide open. A couple of them, like the one 22 (Gabe Osabuohien) hit, he was wide open for a reason. We weren’t going to guard him. He had made four threes, I think, coming into the game this season. We let 11 (Keyshawn Embery-Simpson) get going. He’s a good player. He played with Darius (Days) down at IMG. He’s a good player and we let him get going. (Isaiah) Joe is really talented. He’s made a bunch of threes in SEC play and he made it tough on us.”

On the double-double performance…
“I knew rebounding was going to be a big part of today’s game. Obviously it was not enough, but rebounding the ball and taking control of the game with my size and strength happened toward the end of the game. I just had to do my job.”

On the crowd playing a role in the comeback…
“Like Skylar said, we are appreciative of them coming out. When we were down, we knew they would help us bring energy. The energy helped us come back.”

On starting slow and coming back late…
“We just were not playing hard. Once we got down, we were able to do some of the same things we did against Missouri, but it just was not enough today.”

Opening Statement…
“What a great game. It had a lot of ebb and flow. We came out and we made some shots, and we had some guys come off the bench and give us quality minutes. I thought our guys were really focused on the task at hand. We were able to steal one today. They stole one at our place, but we were able to steal one here.”

On Arkansas’ shooting and overall performance throughout the game…
“We were due. If you think about it, we played defense and we finally shot the ball well, especially with guys coming off the bench and giving us energy. I thought Keyshawn (Embery-Simpson) shot the ball extremely well as he was able to knock down shots. I also thought Isaiah (Joe) played really well. Of course, Daniel (Gafford), I mean what else can you say about him. What a warrior. He played big and unfortunately fouled out which turned the game and it allowed LSU to pressure a little bit. But at the same time, I thought our guys remained poised and did not panic because other guys helped out like Reggie Chaney, which is crucial in this kind of game. And what a big play by Mason Jones.”