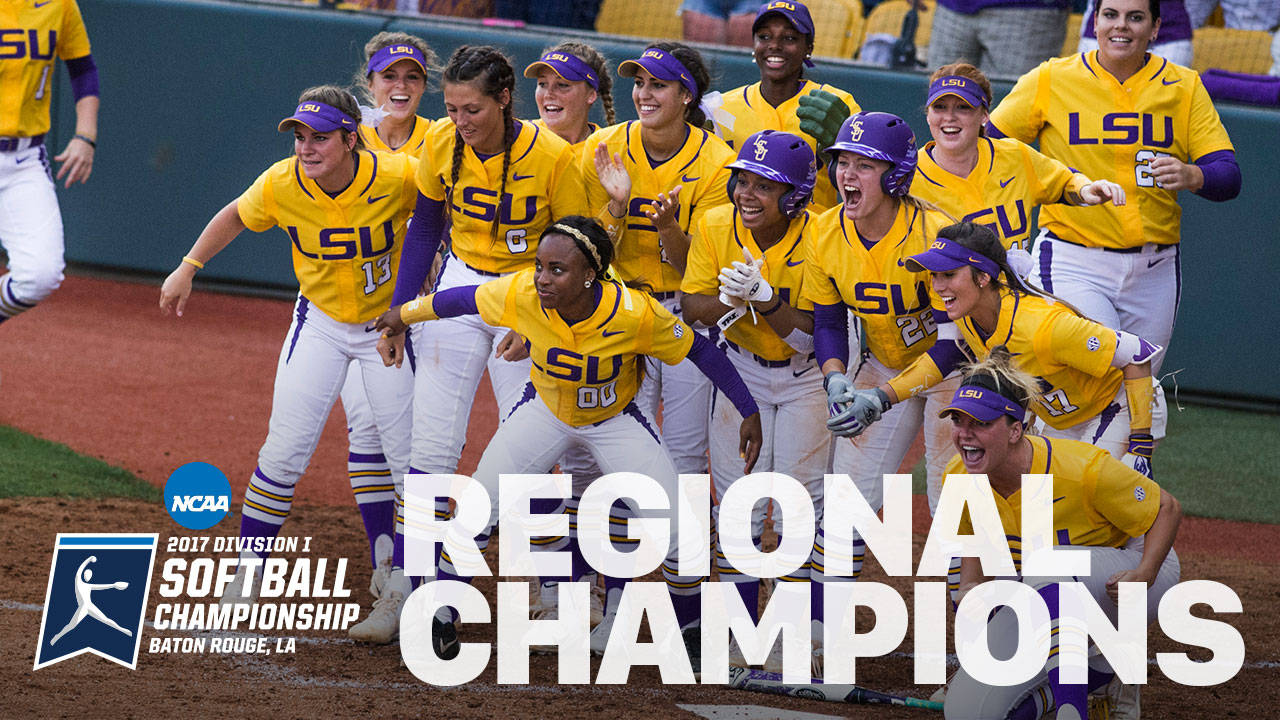 BATON ROUGE – Trailing 1-0 in the top of the third, junior right-hander Carley Hoover entered to limit the No. 14 UL-Lafayette Ragin’ Cajuns to just four hits as the No. 18 LSU softball bats came to life, including a two-run blast from freshman Sydney Springfield, to win the NCAA Regional, 5-1, Monday at Tiger Park.

Hoover notched her third win of the regional to improve to 14-6 on the season. She fired five shutout innings of four-hit softball, striking out three and walking one.

Junior Allie Walljasper started the game for the Tigers, pitched two innings and allowed one run on three hits, walking one.

The loss was charged to Alex Stewart, who fell to 27-5 on the year. She tossed 3.1 innings and allowed five runs—three earned—on seven hits.

Centerfielder Emily Griggs was 10-for-12 throughout the entire tournament. At one point, the junior had a hit in 10 consecutive at-bats, dating from her last at-bat Friday night to her second to last at-bat Monday afternoon.

“I think the past few days has just been a testament to how tough this team is,” Torina said. “What they have been through in the last few days is just unreal when you think about the hours and what they had to endure. I couldn’t be prouder of them. I think it’s amazing that you can think about legends and the legacy they created this weekend.”

The Ragin’ Cajuns jumped out to the early 1-0 lead in the top of the first. With runners on first and second and one out, shortstop DJ Sanders doubled to deep centerfield to drive in third baseman Kara Gremillion. After loading the bases with two outs, Walljasper worked her way out of the inning, inducing a pop up in foul territory to limit UL-Lafayette to one run.

With no outs and runners on first and second in the top of the third, LSU moved to its bullpen for Carley Hoover, who struck out the first batter and induced a 4-3 double play to work out of the jam, holding the score at 1-0 Cajuns.

Shortstop Amber Serrett led off the bottom of the third with a double to left-center. Leftfielder Aliyah Andrews followed with a bunt single to third base to put runners on the corners with no outs, and when Andrews stole second, Serrett scored from third on the error by the shortstop to knot the game. In the next at-bat, Griggs shot a single to left field to score Andrews as LSU snagged the 2-1 lead.

The Tigers tacked on three runs in the bottom of the fourth to make it 5-1. With one out and second baseman Constance Quinn on second after a single to left field, designated player Sydney Springfield rocked a two-run blast to left field for her team-best 10th home run of the season.

Pinch runner Sydney Loup entered for Serrett, who reached on an error by the centerfielder and Andrews singled up the middle to put runners on first and second. The baserunners advanced to scoring position on a passed ball, and Griggs drove in Loup with her 12th hit of the weekend, an infield single to shortstop.

“None of this could have happened without the work of our staff, especially our ground crew who worked tirelessly around the clock,” Torina said. “The LSU staff put on an absolute first-class event like they always do. It wouldn’t have happened without all of their tireless efforts, and we really appreciate all of them. We’re really proud of our team, and hopefully we’ll be prepared when we move on to the next round.”