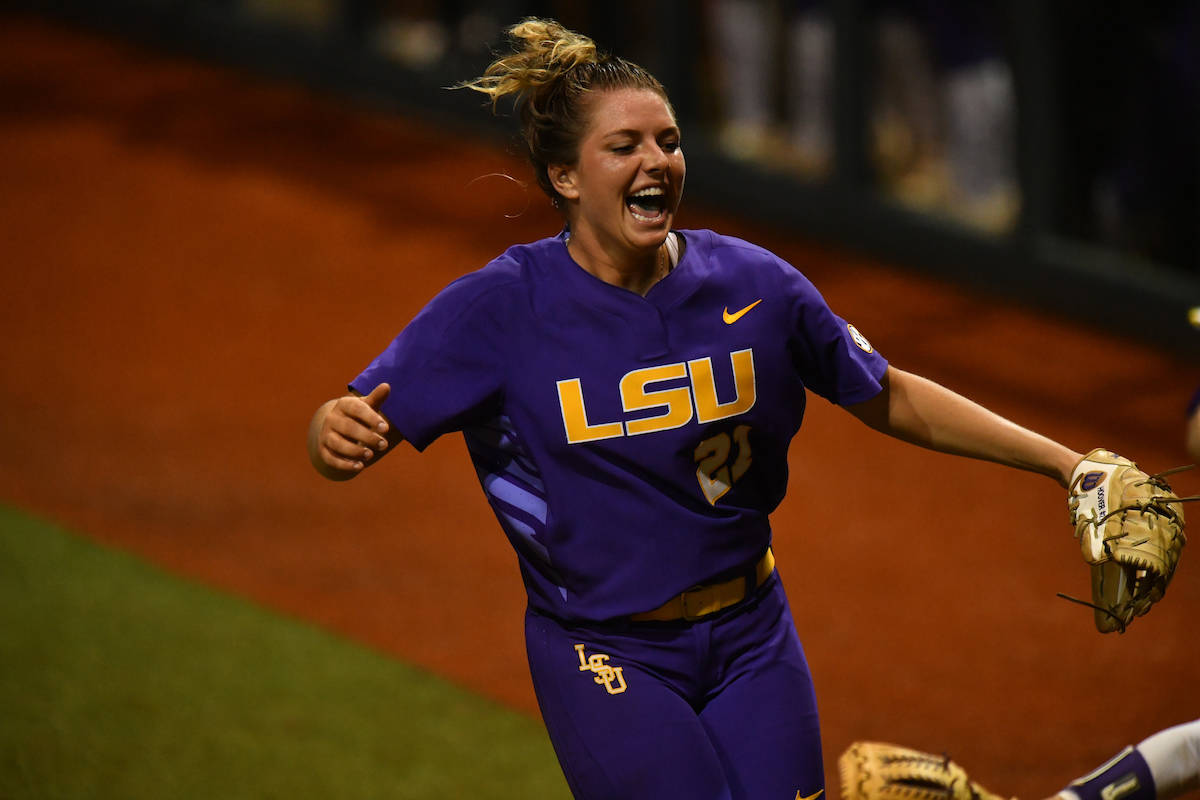 BATON ROUGE –LSU’s Carley Hoover fired her second complete game of the day, and the Tiger offense stayed hot as No. 18 LSU defeated No. 14 UL-Lafayette, 6-1, at Tiger Park Monday morning, forcing a Game 7 to determine the champion of the Baton Rouge Regional.

Game 7 is slated to begin at 1 p.m. CT and will be available online through WatchESPN on ESPN3. Fans can use their Game 6 tickets to enter the park for Game 7. Gates will open at 11:30 a.m. CT. Tickets are still available for purchase at Tiger Park.

Hoover fired all seven innings and allowed only one run on five hits and struck out six, improving to 13-6 on the season.

UL-Lafayette starter Alex Stewart suffered the loss and fell to 27-4 on the season. The right-hander allowed three runs on three hits and struck out one in two innings.

“I thought we carried a lot of momentum from game one against McNeese into this game,
head coach Beth Torina said. “I thought we swung the bats really well against McNeese. I thought the dugout had a ton of energy, and we were able to carry it in. Obviously, (pitcher) Carley Hoover was the big difference. What a day. You can’t say enough about her performance today; it was unbelievable.”

LSU grabbed the early 1-0 lead in the top of the second. With designated hitter Sydney Springfield and second baseman Constance Quinn in scoring positon and one out after being hit by consecutive pitches, shortstop Amber Serrett perfectly executed a safety squeeze to drive in Springfield.

With centerfielder Emily Griggs on first after leading off the top of the third with a hard-hit single to center, catcher Sahvanna Jaquish crushed a ball over the left-centerfield wall to give LSU the 3-0 lead. Her home run marked her ninth blast of the year.

Quinn led off the top of the fourth with a single through the left side and advanced to second on a passed ball. With one out and Quinn on third after a groundout, Serrett ripped a single down the left field line as LSU jumped out to the 4-0 lead.

In the top of the sixth inning with two outs, Serrett hit her fourth home run of the season, a solo shot, to left field. Following Serrett’s home run, left fielder Aliyah Andrews beat out an infield single to third base and scored on Griggs’ fourth hit of the evening, a single up the middle. LSU added two insurance runs in the inning to extend the lead to 6-0.

Catcher Lexie Comeaux reached on an error by the catcher to lead off the bottom of the seventh inning, and Sarah Arceneaux entered to pinch run at first. With Arceneaux at third after consecutive groundouts, left fielder Kelli Martinez singled to the second baseman to break up the shutout.

“We’ve been to the College World Series three times here, and every time we’ve been on the ropes like this in all three years I believe,” Torina said. “I think it gives us a lot of momentum. Now, we’re back to even … We’re matched up evenly tomorrow, and we’ll see where it goes. “