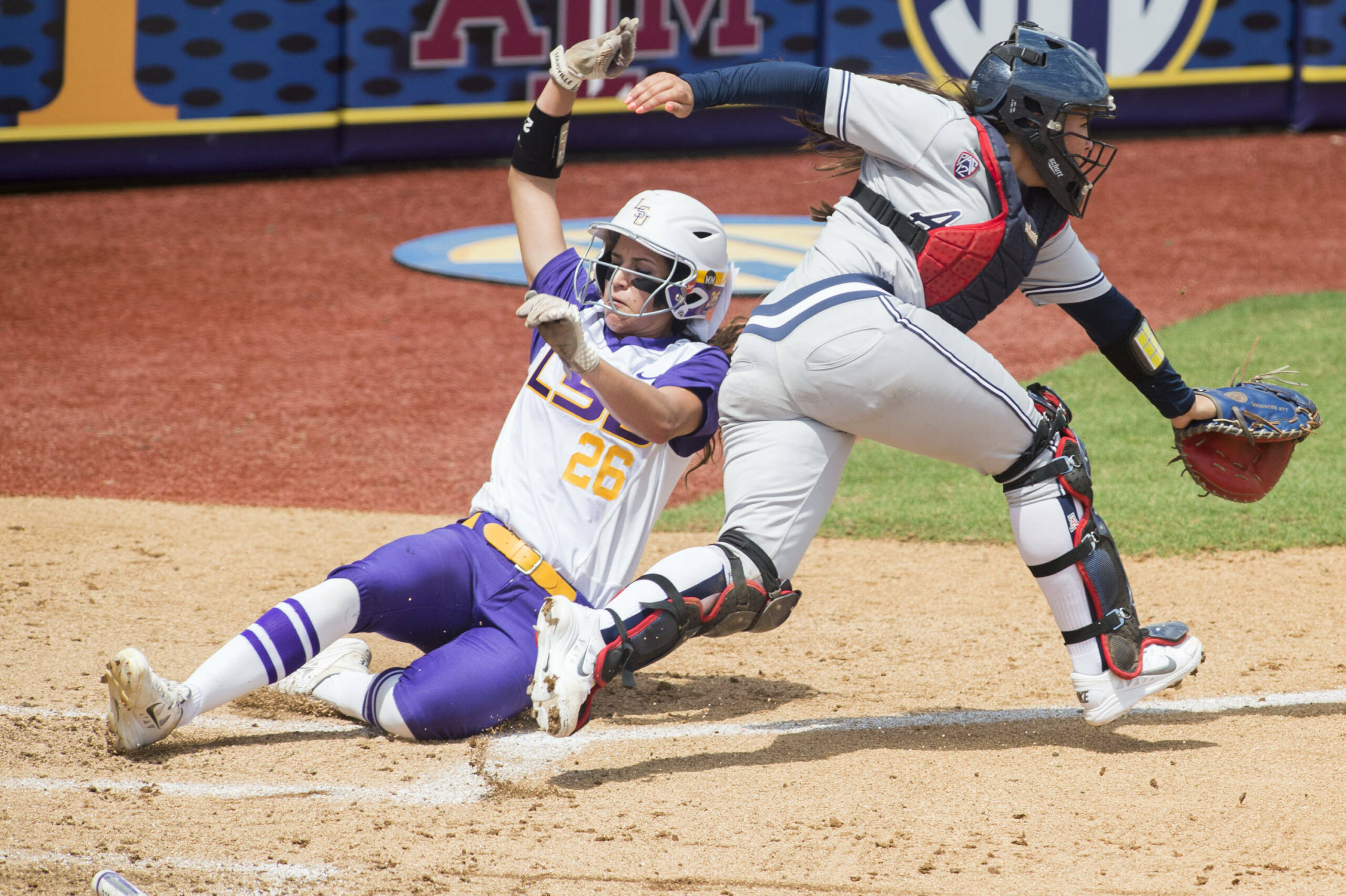 BATON ROUGE, La. – In front of the largest crowd ever to witness a postseason game at Tiger Park in the first ever Baton Rouge Super Regional, the No. 8 LSU softball team wasted little time seizing the moment, scoring eight runs in the first three innings to roll to an 8-0 win over the No. 16 Arizona Wildcats in five innings Saturday afternoon in Tiger Park.

The Tigers (49-12) exploded for four runs in the very first frame to set the tone early, taking advantage of opportunities with runners on base to plate two more in the second and a pair more in the third to get out to a heady lead that the Wildcats (41-19) would never threaten to earn the win in five and sit a game away from advancing to the 2015 Women’s College World Series in Oklahoma City.

“I thought our team played great. I thought we played on all cylinders too,” head coach Beth Torina said. “The offense was amazing. I thought we had a great performance on the mound and played really solid defense.”

LSU needed only five hits to pull ahead, getting two from the bat of Bailey Landry who went 2-for-3 with two RBIs and two runs scored, hitting her second home run of the season. The Prairieville, Louisiana, product was a force in all facets on Saturday, making some outstanding plays with her glove in the field, including an inning-ending double play during one frame.

“We knew that we had to come out today with a lot of energy because Arizona is a great ball club,” Landry said. “I think Carley (Hoover) doing great on the mound, and our hitters backing us up with that made it a combination for a great game.”

The middle of the order for the Tigers also came through, as Sahvanna Jaquish, Kellsi Kloss and Sandra Simmons each drove in at least one run, as Jaquish got the scoring going with a two-RBI single early, with Kloss coming through with an RBI double and Simmons an RBI single. Bianka Bell scored twice and was walked twice, while A.J. Anderws was walked once and scored once.

Earning her second shutout of the postseason, freshman pitcher Carley Hoover (17-5) battled through two walks on her opening two at-bats to storm through the Arizona lineup on Saturday, tossing a one-hitter with a strikeout and three walks to earn the victory, her third of the postseason.

“I wasn’t nervous. I just think that my confidence level is really high when we have fans like this and a park like this,” Hoover said. “It’s packed, and we come out and score runs like this. It’s really hard for me to not be confident in my stuff when everyone else is so confident in theirs today.”

Trish Parks (16-7) opened, and then closed, the game in the circle for Arizona, suffering the loss after allowing four runs on three hits with five walks in just two innings, giving way to reliever Siera Phillips who also pitched two allowing four runs, three earned, on two hits with three walks and a strikeout. Mandie Perez had the only hit for Arizona on the afternoon.

After Arizona got two on in the opening frame of the contest, LSU came back and did one better, as a walk to Andrews to open LSU’s turn at-bat put one on. Landry came through with a bunt single down the right field line to put two on, as Bell went deep into the count before drawing a walk to load the bases for the Tigers.

On the second pitch of her at-bat, Jaquish ripped one through the left side of the infield to plate the first two to make it 2-0 LSU right off the jump. A rocket double off the wall in center by Koss scored Bell to make it 3-0 LSU with runners now at second and third. A walk to Simmons loaded the bases again before the team’s first out came via a force out at home on a fielder’s choice.

A wild pitch allowed Kloss to score from third to make it 4-0, as a walk to Sydney Bourg loaded the bases again and prompted an early pitching change for the Wildcats.

With an out in the bottom of the second, a walk to Bell for the second time today as well as one to Jaquish put two on for LSU. After a diving catch in left for the second out, Simmons ripped a single to first allowing Bell to score to make it 5-0, with a wild pitch scoring Jaquish to make it 6-0 LSU.

An error allowed Emily Griggs to reach first in the bottom of the third, as after a strikeout, Landry reared back and launched a no-doubter to right for the homer to give LSU an 8-0 lead.

Game two of the NCAA Baton Rouge Super Regional is set for a 4 p.m. start Sunday afternoon at Tiger Park. The game will be televised on ESPN.