The Fans Have Spoken, And the Winner Is: 'Bluegrass Miracle' 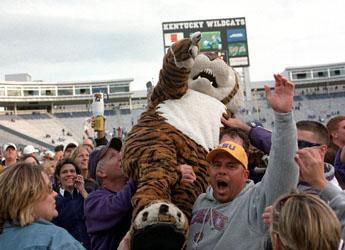 BATON ROUGE — More than 10,000 votes were cast this week by LSU fans on LSUsports.net to determine the name for the last-second play that lifted LSU to a 33-30 win over Kentucky last Saturday in Lexington and “The Bluegrass Miracle” was the runaway winner.

LSUsports.net, the official web site of LSU Athletics, also received 398 write-in e-mails with suggestions ranging from “Lucky in Kentucky” to “The Devine Deflection” to “It Works Devery Time” and “The Lexington Longshot”.

One fan submitted song lyrics for the play, while other suggestions included t-shirt ideas and cartoon drawings.

“The Bluegrass Miracle” has been re-played countless numbers of times this week has been called everything from “The play of the year” by the Associated Press’ National Football Writer Richard Rosenblatt to “Christian Laettner in cleats” by John Clay of the Lexington (Ky.) Herald-Leader.

Tom Leach, Kentucky’s radio play-by-play announcer may have put it best when he said, “How much heartbreak. Kentucky fans are up on the goalposts. I don’t know why.”