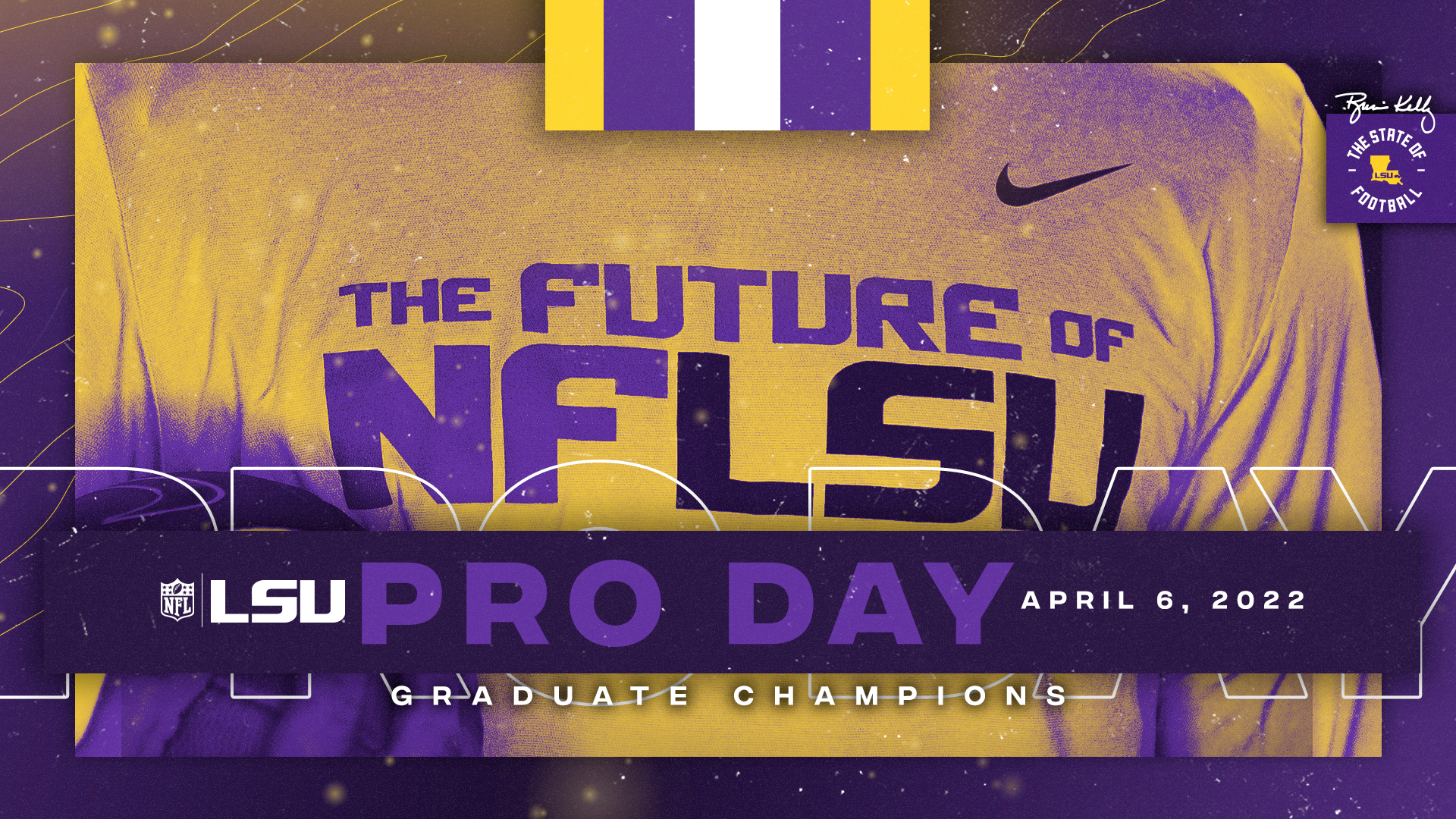 LSU Football Pro Day will be held Wednesday, April 6, 2022. NFL scouts, coaches and executives will attend the event that will feature measuring and workouts of NFL draft-eligible LSU football players.

View the live scorecard from 2022 LSU Football Pro Day below or in the LSU Sports Mobile App.

Players will be measured in the following manner:

Physical Measurements
Each player in attendance will be measured for height, weight and arm and hand length. Offensive and defensive linemen, as well as running backs, may also be measured for body fat percentage.

NFL Team Interviews
Each NFL team is afforded the opportunity to interview up to 60 of the prospects in attendance. The interviews take place in the player hotel, and typically contain questions designed to test a player’s character, mental toughness and football intelligence.

Players will execute the following workouts:

40-Yard Dash
The 40-yard dash is a test of speed and explosion. The player starts from a three-point stance and runs 40 yards as fast as possible. The player is timed in 10, 20 and 40 yard increments, to gauge the player’s explosion of the line and time to top speed.

Bench Press
All players, with the exception of quarterbacks and wide receivers, participate in this test of strength. The player’s goal in this event is to bench press 225 pounds as many times as possible.

Vertical Jump
To measure vertical jump, a player stands flat-footed in front of pole with a multitude of plastic flags sticking out. The bottom of the pole is adjusted to the height of the player’s fingertips when raised straight above his head. The player then jumps from a standing position, and tries to swat as many of the plastic flags as he can. The flags, staged every half inch on the pole, rotate and give the event judge a reading of the height the player jumped.

Broad Jump
The broad jump is also done from a standing position, but this drill measures how far a player can jump. This drill is most important to positions that use lower body strength to gain an advantage. The length of the jump is measured from the starting point to the back of the heel closest to the starting point upon landing.

3-Cone Drill
Tests speed, agility and cutting ability. Three cones are set up in a triangle or L shape, with each cone 5 yards apart. The player starts in a 3-point stance at the first cone. The whistle blows and the player sprints 5 yards ahead to the first cone, reaches down and touches a white line and then sprints back to the starting cone. At the starting cone, he reaches down and touches a white line, then heads back to the second cone. This time, he runs around the outside of the second cone, and cuts right to the third cone. He runs a circle around the third cone from the inside to the outside, then runs around the second cone before returning to the first cone.

20-Yard Shuttle
The 20-yard shuttle test lateral speed and coordination. The player starts in a three point stance, straddling a yard line facing the sideline. When the whistle blows, the player runs 5 yards to one side, touching the yard line. He then sprints 10 yards in the other direction and again touches the yard line, at which point he sprints back to the yard line he started from.

60-Yard Shuttle
The 60-yard shuttle is basically the same drill as the 20-yard shuttle. The only difference is that instead of running 5 yards, 10 yards then 5 yards, the player runs 10 yards to one side, then back 20 yards and then 10 yards to the starting point. This drill is probably the best test of endurance in the entire combine.

Position Specific Drills
Maybe one of the best ways to test a player’s ability to play a position is to run them at drills specifically designed for players of their position. Coaches and Scouts typically run the players through the drills, taking note as to their performance. These drills are typically overlooked for some of the sexier drills, like the 40-yard dash and bench press.