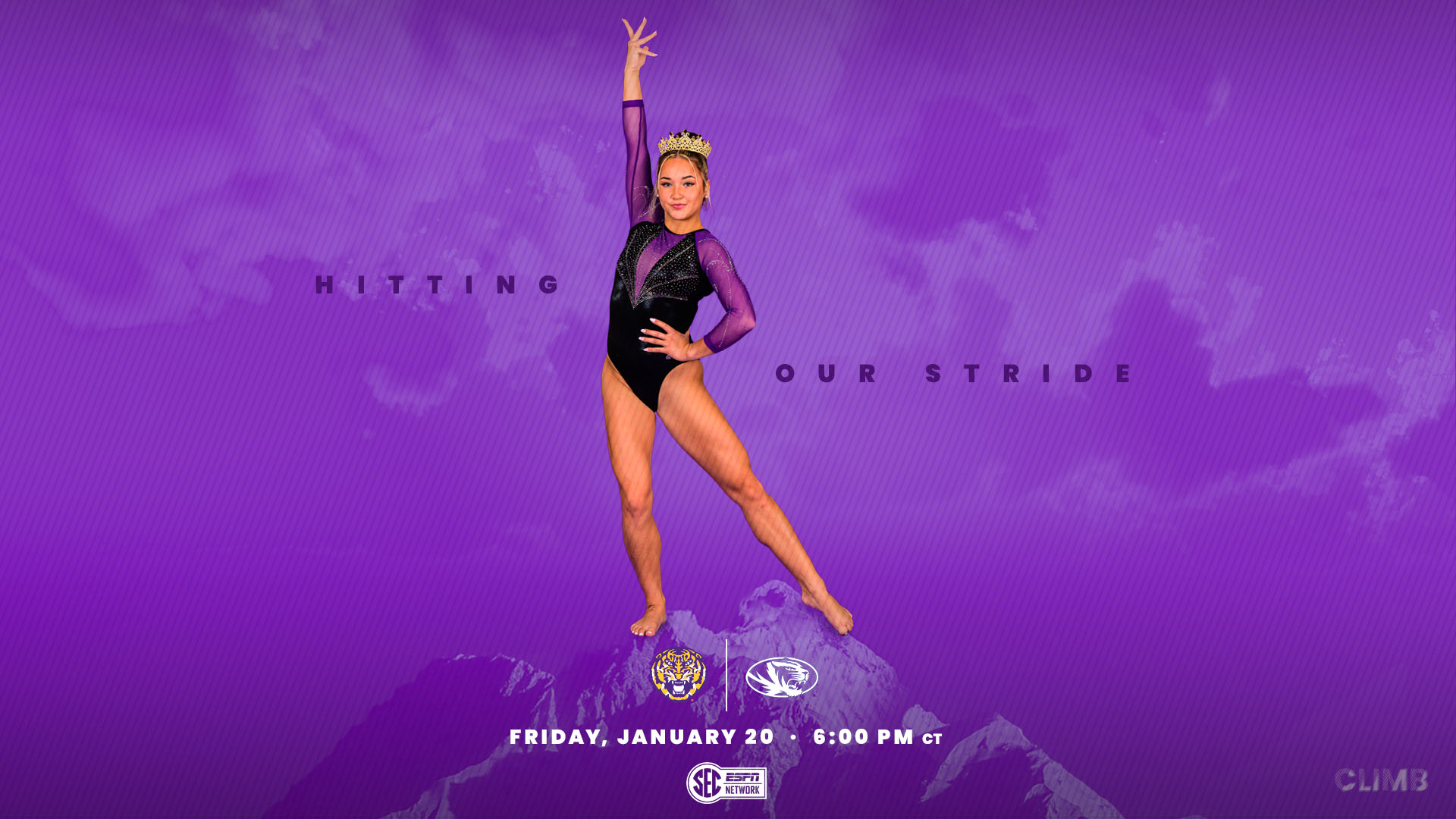 The Friday Night Heights competition between LSU and Missouri will be aired on SEC Network with Alex Perlman on the play-by-play and Ashley with Kathy Johnson Clarke as the analyst.

“We can’t thank our fans enough for showing up at the level on Monday,” said head coach Jay Clark. “We saw that our kids rose to the occasion when the lights came on. There’s no easy outs in this conference and Missouri is a tough team. We’re ready to go and looking for a win.”

Introductions for the top-20 ranked matchup are set for 5:48 p.m. inside the PMAC with the first vault leading off at 6:01 p.m. CT.

Live stats and streaming of the meet can be found on lsusports.net.

Doors to the arena will open at 4:30 p.m. CT. The first 1,000 fans to attend will receive a free cancer awareness shirt.

In the matchup between the Tigers, LSU owns a winning record over the Missouri Tigers with an overall record of 45-9-0. LSU is 16-0-0 at home against Missouri and will look to keep their undefeated record at home.

LSU will look to earn their first victory of the season on Friday night.

Last Time On The Floor

The Tigers fell to the top-ranked Sooners on Monday afternoon in Baton Rouge. LSU battled through all four events and even outscored the defending champions on bars, but ultimately fell to Oklahoma 197.450-197.600 in the team’s home opener.

LSU saw new faces in the lineups on Monday due to all-arounder Kiya Johnson being out with an injury. Junior Chase Brock made her debut in the vault lineup, sophomore Tori Tatum on bars and junior Sierra Ballard on beam.

The Tigers started off strong on vault. Junior Elena Arenas led off with a 9.775 followed by senior Alyona Shchennikova who posted a 9.875. Junior Chase Brock made her debut in the lineup, scoring a 9.80. Sophomore KJ Johnson boosted the lineup in the fourth spot, earning a 9.875. Sophomore Aleah Finnegan added a 9.85 while junior Haleigh Bryant anchored with a 9.925 to take the title on rotation one.

In the second rotation, sophomore Alexis Jeffrey led off with a 9.80. Arenas and  Shchennikova both added 9.875’s to the team’s score. Sophomore Tori Tatum made her debut after suffering from an injury last season and scored a 9.875. Bryant anchored with her score of 9.90 while Finnegan recorded a career-high 9.925.

Senior Kai Rivers led off the third rotation on beam with a 9.80. Junior Sierra Ballard made her debut in the beam lineup and scored a 9.825. KJ Johnson scored a 9.750. Arenas and Bryant followed with strong routines, scoring a 9.875 and a 9.950 in the fourth and fifth spots, while Finnegan anchored beam with a 9.775. Bryant’s 9.95 matched her career high and earned her second title of the night.

In the final rotation, Ballard led off with an explosive performance, scoring a 9.90 to start things off on floor. Shchennikova matched her career high on the event with her 9.925 as well as Finnegan, who matched her career high with a 9.95. KJ Johnson posted a 9.775 and Bryant closed out the evening with a 9.90. Finnegan took the title with her 9.950 for her second title on the event this year.

Bryant earned the all-around title in the Tigers competition against the Sooners, finishing with a season high 39.675. The junior has won the all-around in all three of the Tigers meets thus far, also taking the title against Utah and Kentucky.

An eight-time All-American, Bryant’s front handspring-front pike half is considered to be one of the best vault’s in collegiate gymnastics. She finished the 2022 regular season as the No. 3 vaulter in all of NCAA Gymnastics and owns five career perfect 10’s on the event.

Bryant has had a strong start to the season, earning eight titles in three meets. She owns two on vault, one on beam, one on bars and three in the all-around. The junior is ranked nationally as ninth on beam, eleventh on vault and ninth in the all-around.

Arenas has been a consistent contender in the vault, bars and beam lineups. The junior from Athens, Georgia, won the SEC vault title in 2021. She recorded a career high of 9.925 on beam at Kentucky.

Senior Kai Rivers made her return to the lineup in 2022 after dealing with an achilles injury. After a battle with injury throughout her career, the senior is a staple in the beam lineup as the lead off and provides a veteran routine to the lineup.

Sophomores KJ Johnson and Finnegan have made immediate impacts this year after impressive freshman seasons in 2022. KJ Johnson has been a main-stay in the vault, floor and beam lineups, while Finnegan competes the all-around.

A native of Lee’s Summit, Missouri, Finnegan had a career night in the season opener against Utah, recording a career high 9.950 to take the title on the event and took the co-all around title on the night with a 39.450. Since then, the sophomore matched her career high on floor and recorded a new career high of 9.925 on bars against Oklahoma.

Tori Tatum, a sophomore from Chanhassen, Minnesota, made her debut on bars on Monday afternoon after suffering from an injury last year. Tatum scored a 9.875 in her first ever collegiate routine and has the potential to make multiple appearances in the bars lineup.

Freshman Ashley Cowan, a native of Hillsborough, North Carolina, has been training the uneven bars and has the potential to make an appearance in the lineup. Bryce Wilson, a native of Lake Charles, Louisiana, made her collegiate debut on beam in the season opener against Utah.