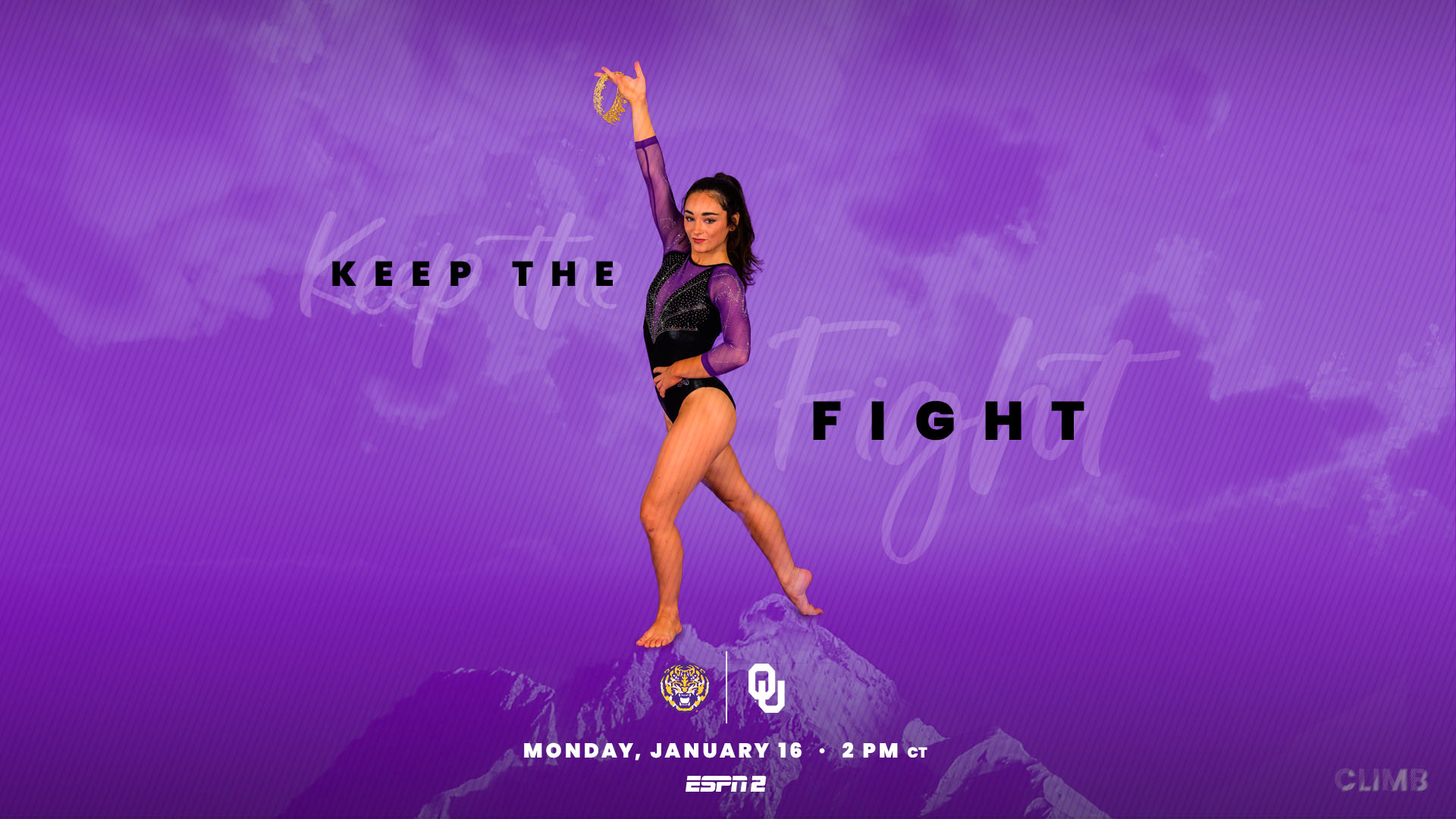 BATON ROUGE – No. 13 LSU Gymnastics is set to host No. 1 Oklahoma in the team’s home opener on Monday, January 16, at 2 p.m. CT in the Pete Maravich Assembly Center.

The squad’s home opener against the Sooners will be televised on ESPN2 for the Tigers third showing on national television. Bart Conner will be on the play-by-play call with Kathy Johnson Clarke as the analyst. Sam Peszek will be the on-site reporter.

The first rotation is set for 2:01 p.m. CT in Baton Rouge as the Tigers leadoff on vault.

“We have to keep moving forward,” said head coach Jay Clark. “We need people to step up. Yes, it hurts when you lose one of your stars, but other people need to step in and fill those roles, and they will.”

Live stats and streaming of the highly anticipated matchup can be found on lsusports.net.

There will be 500 mini-mike giveaways on Monday’s home opener as well as free food to the first 250 students to attend. The first 250 Mike’s Kids Club members will also receive a pop-it giveaway.

The showdown between LSU and Oklahoma will be the first time the two teams meet in seven years. The last time the two met was in 2016, when the Tigers defeated the top-ranked Sooners with a score of 196.950-196.725 inside the PMAC.

Oklahoma holds the series record over LSU with an overall record of 11-21-0. The Tigers are 5-8-0 against the Sooners in the regular season with an even home record of 2-2-0.

LSU will look to take the home record lead on Monday afternoon and record the teams first victory of the season.

The Tigers faced No. 12 Kentucky on Friday night for the first time in Rupp Arena.

LSU started off with a solid first rotation in Lexington, scoring a 49.475 on bars. Senior Kiya Johnson led the squad off earning a 9.90 to set the tone. Sophomores Alexis Jeffrey and Aleah Finnegan both recorded new career highs with scores of a 9.90. In the anchor spot, junior Haleigh Bryant matched her career high with a 9.95 and took the individual title on the event for the night.

The squad was battle-tested throughout the next two rotations. On floor, junior Sierra Ballard led off with a 9.85. Senior Alyona Shchennikova and KJ Johnson both added a 9.85 in the second and third spots. LSU finished with a 48.825 in the third rotation after Kiya Johnson suffered an injury in the sixth spot.

In the final rotation in Lexington, senior Kai Rivers started the beam squad off with a 9.85. After freshman Bryce Wilson suffered an injury in the second spot, the rest of the lineup continued their routines and battled through adversity. Bryant and Arenas had career nights on the event. Bryant matched her career high with a 9.95, while Arenas recorded a new career high, scoring a 9.925 after anchoring in place of her injured teammate.

Haleigh Bryant earned a 39.575 on the night to take the all-around title. The junior also took the title on bars and balance beam, alongside Kentucky’s Raena Worley.

The program returns experienced routines to the lineup with seniors Kiya Johnson and Alyona Shchennikova and junior Haleigh Bryant, who combine for 18 All-America honors.

Johnson, an eight-time All-American, owns honors on all four events as well as the all-around. The senior was the SEC Specialist of the Year and Floor Champion in 2021 and owns seven perfect scores in her career with four on floor, two on beam and one on vault.

Shchennikova is a two-time All-American on vault and uneven bars.

An eight-time All-American, Bryant’s front handspring-front pike half is considered to be one of the best vault’s in collegiate gymnastics. The junior finished the 2022 regular season as the No. 3 vaulter in all of NCAA Gymnastics and owns five career perfect 10’s on the event.

Arenas has shown consistency throughout her career and in fall training. The junior from Athens, Georgia, won the SEC vault title in 2021 and is ranked sixth on beam after her career high performance on beam with a 9.925 against Kentucky.

A native of Gainesville, Virginia, Cammy Hall transferred to LSU from Utah for her fifth-year. Hall suffered an Achilles injury during fall training and is out for the season, but will continue to have an important role on the squad.

Rivers made her return to the lineup in 2022 after dealing with an Achilles injury. After a battle with injury throughout her career, she is expected to lead the Tigers off on balance beam this season. The senior provides an important role on the squad as a veteran leader and voice.

Sophomores KJ Johnson and Finnegan have made immediate impacts this year after impressive freshman seasons in 2022. KJ Johnson has been a main-stay in the vault, floor and beam lineups, while Finnegan competes the all-around.

A native of Lee’s Summit, Missouri, Finnegan had a career night in the season opener against Utah, recording a career high 9.950 to take the title on the event and took the co-all around title on the night with a 39.450.

Alexis Jeffrey, who transferred to the Purple & Gold last season, debuted on bars against Utah and will be a consistent contender on the event. Tori Tatum has the potential to make her debut on uneven bars after suffering from an injury last year.

Freshman Ashley Cowan, a native of Hillsborough, North Carolina, has been training the uneven bars and has the potential to make an appearance in the lineup early. Bryce Wilson, a native of Lake Charles, Louisiana, made her collegiate debut on beam in the season opener against Utah.