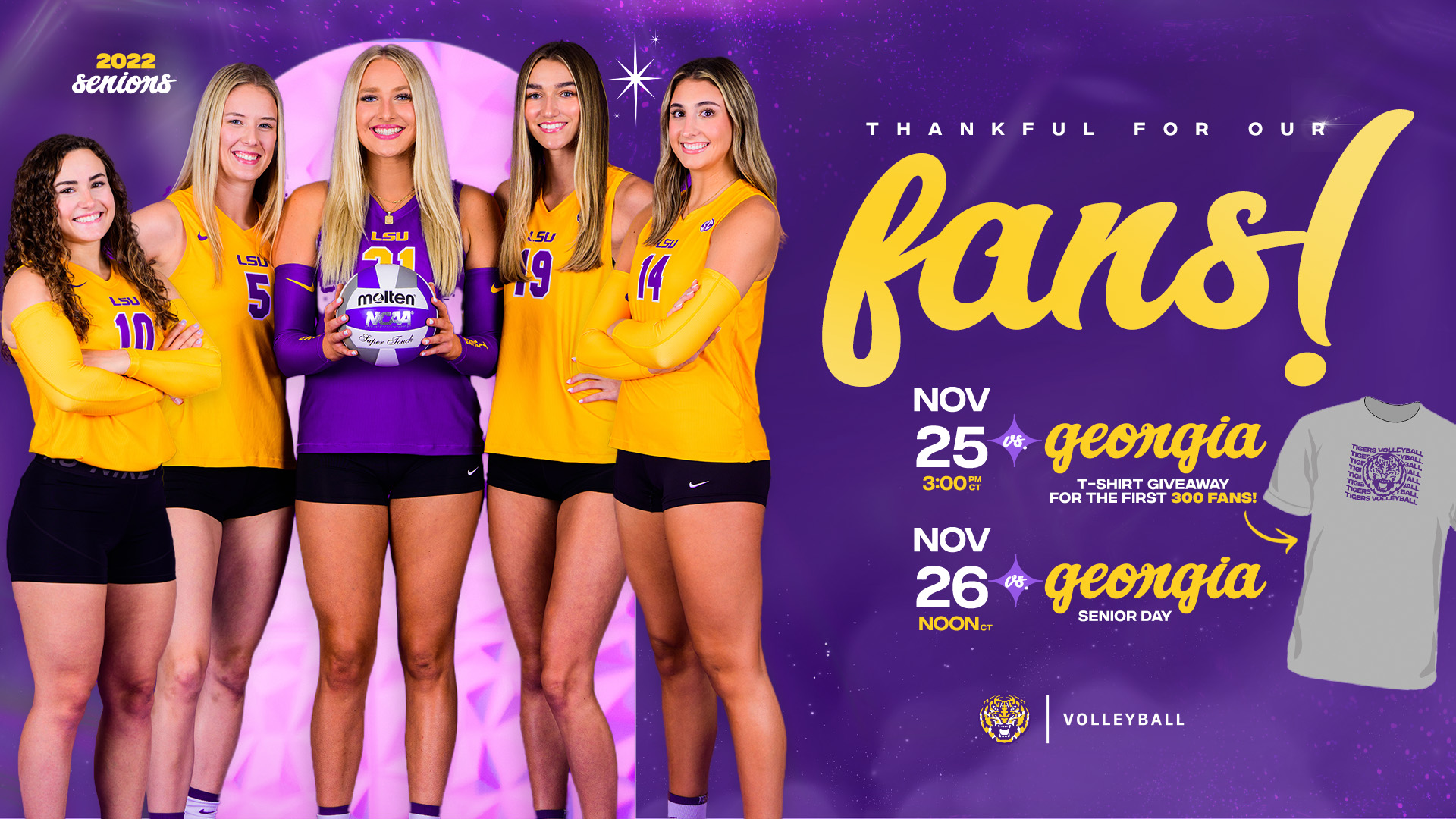 BATON ROUGE, La. – On the final weekend of the regular season, the LSU Tigers will square off against Georgia Nov. 25-26 at the Pete Maravich Assembly Center.

LSU (15-11, 9-7 SEC) and Georgia (20-7, 11-5 SEC) will open the weekend with a 3 p.m. match Friday and will conclude the series at noon Saturday, honoring Jill Bohnet, Emily Gauthreaux, Hannah Jacobs, Allee Morris and Josie Vondran for Senior Day. Both matches will be streamed on SEC Network+ with Lyn Rollins and Fran Flory on the call.

Libero Ella Larkin leads the SEC with 4.41 digs per set (467 total) and is 31 digs shy of breaking into the top 10 of the program’s record book for the most digs in a single season (Raigen Cianciulli No. 10 at 498 total digs). Larkin has accumulated four 30-plus dig performances this season and has 14 aces.

Setter Josie Vondran ranks No. 10 in the conference with 6.60 assists per set and contributes 95 kills, 54 blocks and 13 aces. Freshman setter Maddie Waak has registered 4.37 assists per set to go along with 17 aces and has three double-double this season. Middle blocker Anita Anwusi leads the team with 1.11 blocks per set (118 total) and has collected 191 total kills on the year. Anwusi has over 300 career blocks and is four kills shy of 500 career kills.

Georgia is one of the hottest teams in the SEC and sits third in the conference standings. The Bulldogs rank No. 7 in the SEC with a .241 attacking percentage and rank second with 1.80 aces per set. UGA is solid defensively as well, holding its opponents to a .186 hitting percentage and averages 2.64 blocks per set, both marks ranking No. 3 in the SEC. Georgia does rank last however with 12.02 digs per set.

Outside hitter Kacie Evans ranks third in the SEC with 4.03 kills per set and second with 0.42 aces and 4.83 points per set. Middle blocker Sophie Fischer is the SEC leader with 1.53 blocks per set and sixth with a .338 hitting percentage behind teammate and counterpart Mackenzie Norris who has a .346 hitting percentage (No. 5 in SEC). Other impact players for the Bulldogs consist of outside hitter Amber Stivrins who averages 0.34 aces per set (No. 4 in SEC) and defensive specialist Bailey Cox who averages 3.44 digs per set (No. 10 in SEC).

LSU leads Georgia in all-time series 40-25 and are currently on a three-match winning streak when the two clubs play in Baton Rouge. The Tigers and Bulldogs split last season’s two-match series in Athens, Ga.