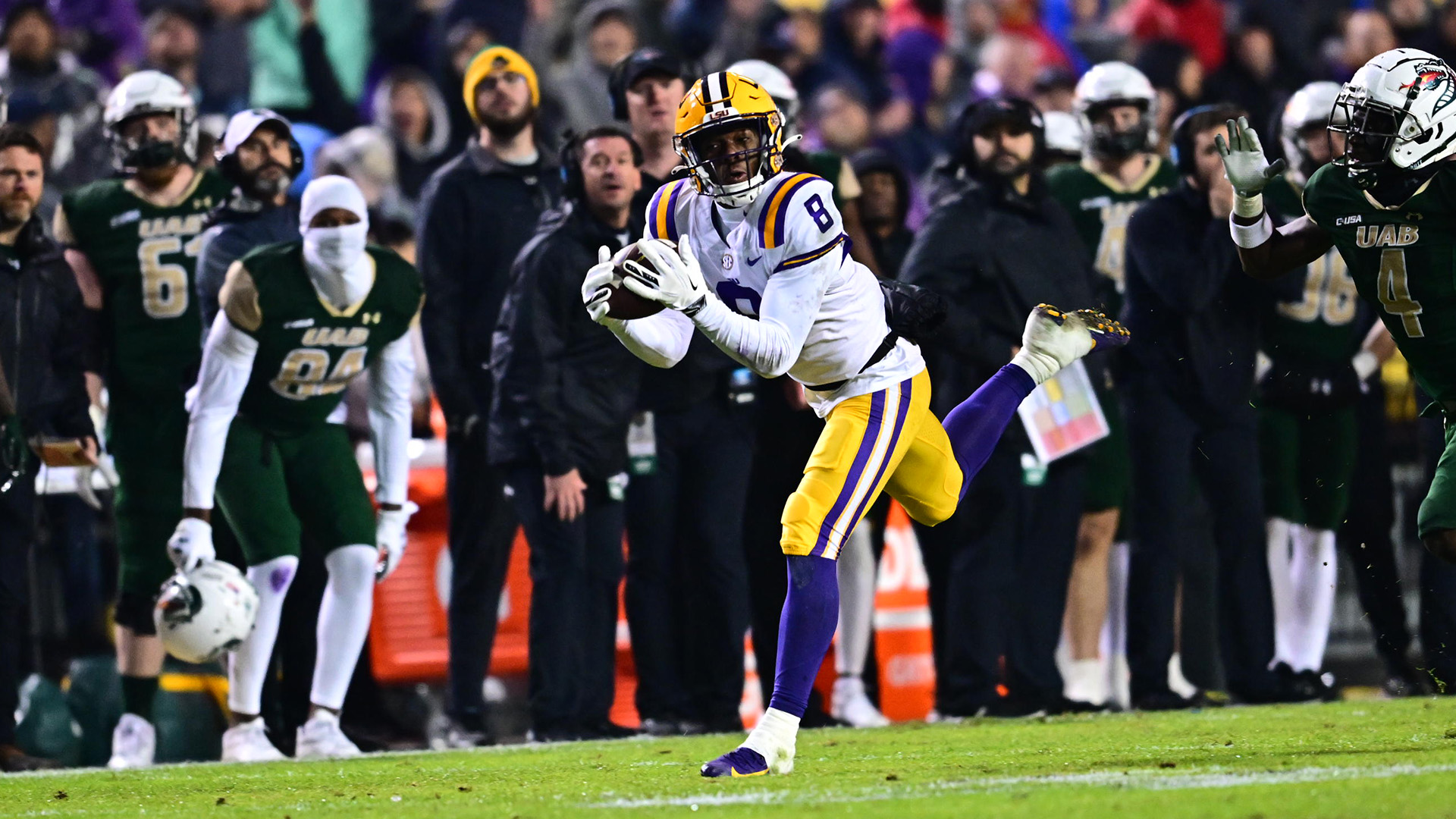 BATON ROUGE – Jayden Daniels posted one of his most efficient outings of the season, throwing for 297 yards and running for 129 as LSU defeated UAB 41-10 on Senior Night.

LSU improved to 9-2 on the season. The Tigers return to action next Saturday in College Station against Texas A&M at 6:00 p.m. CT on ESPN.

Sophomore linebacker Greg Penn III led the team in tackles with eight, while Harold Perkins recorded five, two for loss and a pass break up.

Malik Nabers led the offense in receiving with seven catches for 129 yards, with a long of 47. Brian Thomas caught the Tigers’ lone touchdown pass in the fourth quarter.

On the second play from scrimmage, Daniels found Malik Nabers for a 47-yard connection, quickly putting LSU at the UAB 27. On 3rd-and-goal from the 2, Emery rushed for a 2-yard touchdown to give the Tigers an early 7-0 advantage with 10:44 remaining in the first quarter.

Jermaine Brown returned Nathan Dibert’s kickoff 66 yards to the LSU 35 and was brought down by Jaray Jenkins. DeWayne McBride took advantage of good field position with a 5-yard touchdown rush, making it 7-7 with 9:19 to play.

Marching inside UAB territory, Daniels found Jaray Jenkins for a 25-yard pickup to the UAB 5. Noah Cain answered right back with a 5-yard touchdown run of his own, putting LSU back on top 14-7 at 5:59. Daniels led the offense on an eight play drive that went 75 yards in 3:20.

On 3rd-and-5 from the LSU 6, Ali Gaye sacked UAB quarterback Dylan Hopkins. To open the second quarter, Matt Quinn knocked through a 29-yard field goal to make it 14-10 LSU with 14:57 to go in the first half.

Daniels found Nabers for a 37-yard completion to put the Tigers inside the red zone, but the drive would not continue as Emery fumbled, giving possession back to UAB at the 8-yard line.

On 3rd-and-7 from the UAB 34, Daniels avoided pressure and broke out of the pocket for a 23-yard pickup with his legs and an LSU first down. Cain rushed for a 1-yard touchdown to extend the Tigers’ lead to 21-10 with 5:20 remaining in the half.

On 4th-and-3 from the LSU 44, the Blazers elected to go for it, but Hopkins’ pass to Rudolph fell incomplete for a turnover on downs.

Daniels quickly put the Tigers inside the red zone with a 28-yard rush to the UAB 14. Daniels then found Mason Taylor for a 13-yard connection to the UAB 1, where Cain punched it in for a touchdown on the next play, giving LSU a 28-10 lead with 40 seconds to go before the break.

Daniels picked up 15 yards with his legs to the UAB 27 with an added 15 yards after a late hit out of bounds penalty was enforced at the end of the run. From the UAB 2, Daniels kept it himself for a two yard rushing score, extending the lead to 34-10 for the Tigers at 6:50.

On 4th-and-9 from the LSU 24, Hopkins’ pass to Rudolph fell incomplete for a turnover on downs. However, on the first play of the fourth quarter, Emery fumbled and UAB recovered at their own 28.