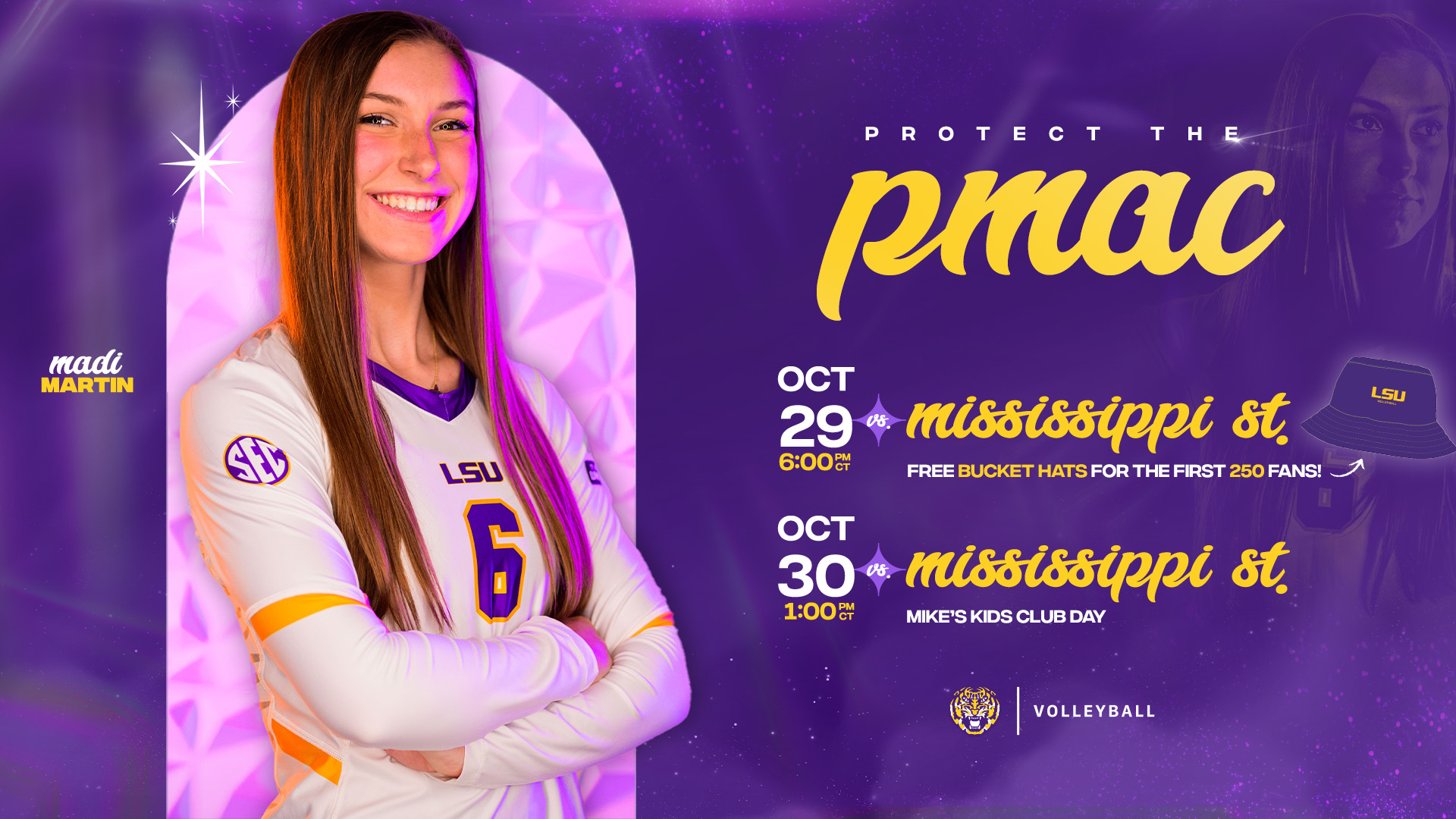 BATON ROUGE, La. – The LSU Volleyball team will take on Mississippi State in a pair of pivotal matches that could have post-season implications on Oct. 29-30 at the Pete Maravich Assembly Center.

The first serve of the weekend will be at 6 p.m. on Saturday, October 29, and the series finale will begin at 1 p.m. on Sunday, October 30. Both matches will be streamed on SEC Network +.

The first 250 attendees at Saturday’s match will receive a free bucket hat, and Sunday is Mike’s Kids Club Day which will feature post-match trick-or-treating.

Libero Ella Larkin is this week’s SEC Co-Defensive Player of the Week and leads the SEC with 4.55 digs per set (364 total). Larkin has accumulated three 30-plus dig performances this season and adds 12 aces this season.

Setter Josie Vondran’s 6.93 assists per set ranks No. 10 in the SEC and contributes 61 kills, 36 blocks and 12 aces this season. Freshman setter Maddie Waak has registered 4.59 assists per set to go along with 13 aces. Waak turned in her first career double-double with career-highs of 39 assists and 10 digs at Alabama (Oct. 19). Middle blocker Anita Anwusi leads the team with 1.09 blocks per set (87 total) and has collected 140 total kills on the year (1.75/set).

Mississippi State is nursing a four-match losing streak entering this weekend’s series. The Bulldogs are hitting .236, while allowing their opponents to hit .211 this season. MSU ranks No. 5 in the SEC with 13.30 kills and 12.38 assists per set and leads the SEC with 15.14 digs per set.

Right side Gabby Waden leads the Bulldogs with 3.54 kills per set and setter Gabby Coulter ranks No. 9 in the SEC with 9.22 assists per set in addition to 13 aces. Defensive specialist Lilly Gunter also has 13 aces on the year and ranks No. 7 in the league with 3.78 digs per set, and middle blocker Deja Robinson leads the team at the net with 70 total blocks (1.00/set).

Despite dropping two matches to Mississippi State last season, LSU is 8-2 in the last 10 head-to-head meetings and boasts a 64-11 record in the all-time series.