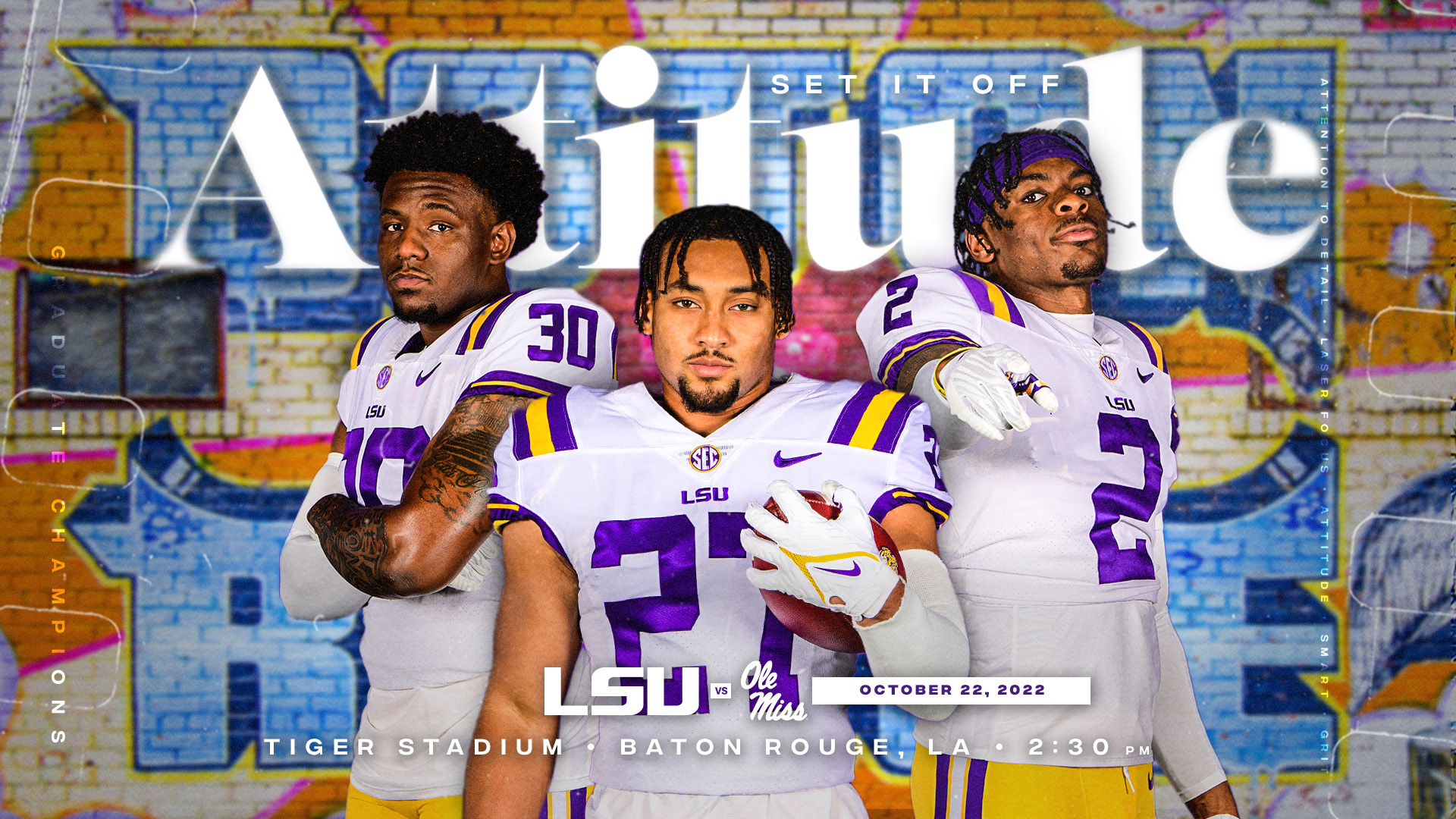 For the second time in two weeks, LSU (5-2) hosts a top-10 opponent in Tiger Stadium as No. 7 Ole Miss (7-0) travels to Baton Rouge on Saturday afternoon.

Kickoff is set for 2:39 p.m. CT on CBS and the LSU Sports Radio Network.

The Magnolia Bowl is home to one of the SEC’s oldest rivalries. The Rebels will bring a Top 10 ranking and undefeated record into Tiger Stadium for the sixth time with the latest coming in 2014 when No. 3 Ole Miss owned a 7-0 record. LSU won that game, 10-7.

The Tigers are coming off their most complete performance of the season last weekend against Florida as quarterback Jayden Daniels accounted for six touchdowns – three passing and three rushing – to top the Gators 45-35, marking LSU’s 10th victory over Florida in 13 contests.

Kayshon Boutte highlighted a big night for the receivers, recording a team-leading six catches for 115 yards. Jaray Jenkins and Brian Thomas Jr. both caught just two passes a piece, but their impact was large, tallying 67 yards and a touchdown and 31 yards and a touchdown, respectively. The group garnered 349 yards receiving with three total touchdowns.

“I thought they were confident and they maintained that throughout the game even though there was some adversity,” LSU Head Coach Brian Kelly said on Monday. “They kept their emotions in check. The sideline was excellent. Proud of our football team in the way they handled themselves.”

Josh Williams posted 14 carries for 106 yards last week, averaging 7.6 yards per touch, earning him the game ball. The former walk-on always does it the right way, Kelly says, and last Saturday he made the plays when the Tigers needed them most.

“His attention to the smallest of details helped us win,” Kelly said. “I wanted to make sure that was followed up with the game ball. All the little jobs that you ask him to do, he does them.”

Freshman left tackle Will Campbell earned SEC Offensive Lineman of the Week, the league office announced on Monday. With freshman Emery Jones Jr. starting at right tackle, it’s a maturity and readiness that coach Kelly has never seen before, but they are deserving of their roles because of their physical and mental toughness.

“I don’t believe I’ve ever started two freshmen on the offensive line, period,” Kelly said. “But to have two tackles start is quite unusual. Their mental approach to the game is so far above any freshmen I’ve ever coached.”

Defensively, senior linebacker Micah Baskerville has 26 tackles, two for loss a sack, a pass break up and a QB hurry over the last two games, leading the team in tackles with 41 for the season.

Placekicker Damian Ramos was poised under pressure in the Swamp, converting a clutch 47-yard field goal to ice LSU’s win over Florida. That’s something the coaches have tried to simulate since fall camp, Kelly says, and it paid off in the biggest way for the redshirt freshman.

“It’s loud, that’s a big kick,” Kelly said. “That ices the game, and he nails it. The execution was great. Since camp, we’ve tried to simulate that the best we can, and he’s been spot on. We felt really confident in that situation.”

SEC Nation Is Back!
The crew will be live from The Quad on Saturday

Ole Miss is led by quarterback Jaxson Dart, who has recorded 1,488 yards and 11 touchdowns. Quinshon Judkins leads the rushing attack with 720 yards and 10 touchdowns, averaging 5.8 yards per carry with 10 touchdowns. Zach Evans is a close second with 605 yards and seven scores. Jonathan Mingo lead the receivers with 507 yards and three touchdown catches.

“It’s another top-10 team coming into the stadium and we’re excited about the challenge,” Kelly said. “They have a balanced attack. They can run it equally as well as they can throw it.”