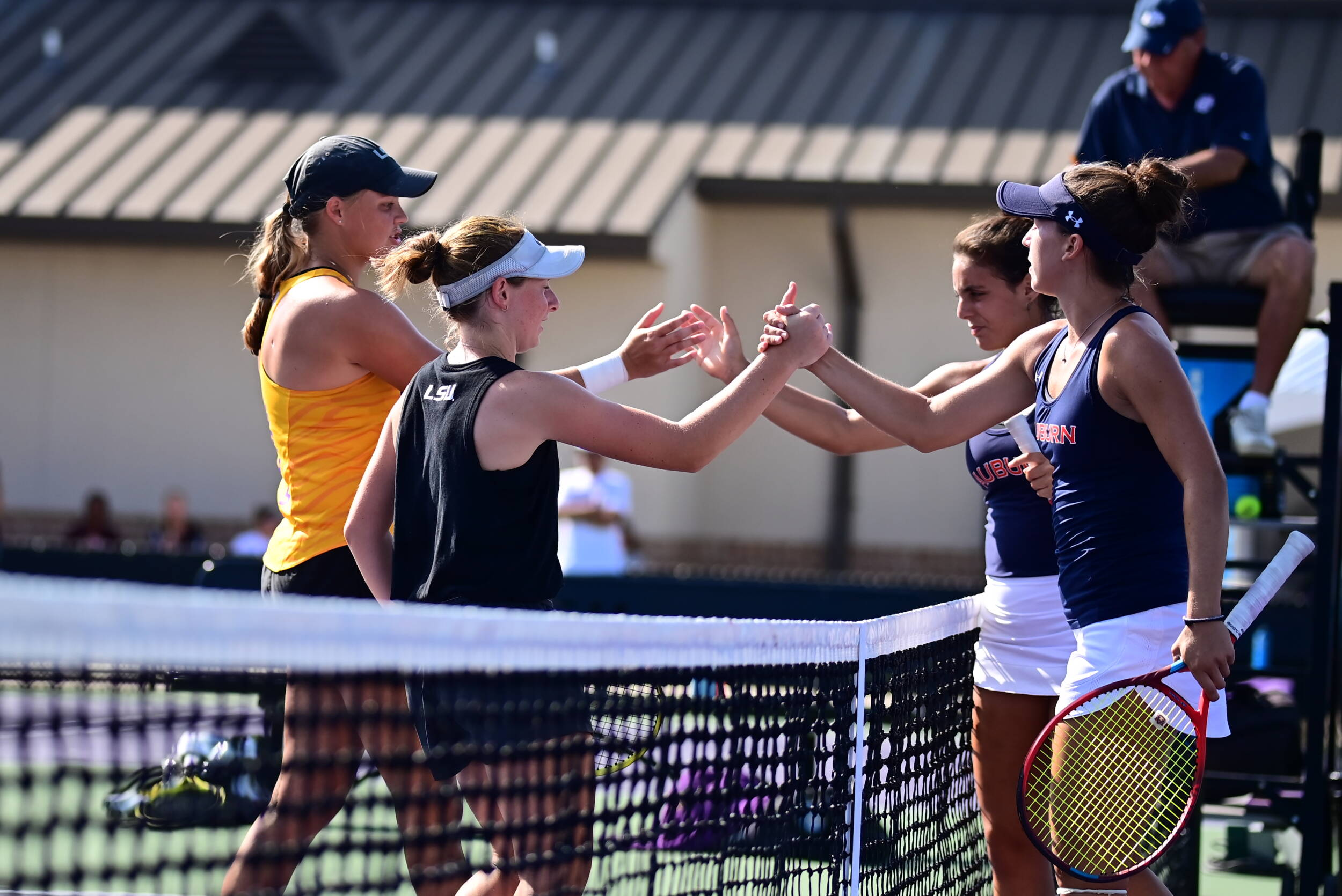 BATON ROUGE, La. – The doubles final of the 2022 ITA Women’s Southern Regional will be an all-LSU contest as the experienced pair of Mia Rabinowitz and Maggie Cubitt and freshman duo of Anastasiya Komar and Nikita Vishwase advanced through the quarterfinal and semifinal rounds on day four of the regional on Sunday at the LSU Tennis Complex.

Singles Results – Quarterfinal
The day opened with three LSU players playing in the quarterfinal stages of the singles draw. Cubitt faced the region’s top seed and the nation’s No. 52-ranked player in Emma Antonaki. Antonaki claimed the first set by a score of 6-1 before holding off a charge from Cubitt in the second en route to a 6-3 win.

Vishwase took on No. 54-ranked Petra Sedlackova of Alabama in her match. The Alabama player won the first set by a score of 6-1 and took an early lead in the second. Vishwase surged back from a slow start in the second set, but it wasn’t enough as Sedlackova held on to win 6-4.

Komar advanced to the semifinal round after grinding out a three set win over No. 62 Loudmilla Bencheikh from Alabama. Komar narrowly edged the first set, 6-4, before the two split the second set 6-6 after 12 games. In the tiebreaker, Bencheikh jumped out to an early lead and went on to win 7-3 and force a third set. Neither play gave an inch in the third set, but it was the LSU Tiger who won two straight after it became 5-5 and clinched a 7-5 win to advance to the next round.

Doubles Results – Quarterfinal
Cubitt and Rabinowitz took on Auburn’s Kaitlyn Carnicella and Adeline Flach in the doubles quarterfinals. After an even start to the match, the LSU pair took the lead and control of the match as they went on to win 8-5.

The senior duo of Safiya Carrington and Nina Geissler took on No. 25 Petra Sedlackova and Anna Parkhomenko of Alabama at the next court over.  After both teams switched leads in the match, the match sat at 7-7 and required a tiebreaker to decide it. The tiebreaker went the distance, but the Alabama duo finished the match with two consecutive points to win 9-7 and advance to the semifinal round.

After an hour and a half time change from the initial 1 p.m. start time due to Komar’s long singles match in the morning, her and partner Vishwase faced Mississippi State’s Antonaki and Gia Cohen. The Bulldogs took an early lead in the match, but the LSU pair recovered from the slow start and went on a strong run to take the lead and break away. The team showed maturity and finished strong to win 8-6 and advance to the next round.

Doubles Results – Semifinal
The match format for doubles switched as the semifinal started. Qualifying and main draw up to the quarterfinals played an 8 game pro set, but the scoring was changed back to six games, best two of three sets.

Cubitt and Rabinowitz were looking to earn a spot in the final and avenge their teammates who fell in the quarterfinals when they took on the No. 2 seed of the regional and the No. 25-nationally ranked duo of Sedlackova and Parkhomenko. The Tigers won the first set in strong 6-2 fashion before the Crimson Tide duo flipped the script and won 6-1 to force a ten-point tiebreaker to decide the match. Cubitt and Rabinowitz recovered from their second set defeat and coasted to a 10-4 win to book their spot in the doubles final.

The No. 1 regional seed and No. 14-ranked duo in the nation, Lahari Yelamanchili and Charlotte Russell, were the team that stood in the way of Komar and Vishwase reaching the doubles final. The two teams battled in an even first set, but the Tigers were able to come up big and win 6-4 to claim set victory. The freshmen carried that momentum into the second set, where they emphatically blanked the top duo, 6-0, and punched their ticket to the doubles final.

Up Next
Day Five of the ITA Southern Regional will begin with the semifinals of the singles draw at 10 a.m. CT on Monday, where Komar will take on No. 52 Emma Antonaki of Mississippi State. Later in the afternoon at 1 p.m. CT, Cubitt and Rabinowitz will take on Komar and Vishwase for the regional doubles title.